Bangalore boy Yash Aradhya has become the first Indian motorsport racer to win the Pradhan Mantri Rashtriya Bal Shakti Puraskar. NSoJ speaks to the 17-year-old for whom the only way is up. 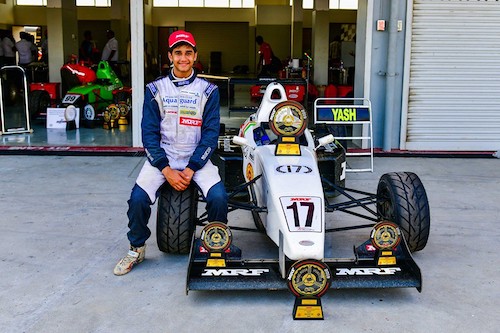 Bangalore: “My passion for speed and cars got me into racing,” says Formula 4 racer, Yash Aradhya. A student at the Bishop Cottons Boys’ School, this Bangalore boy has been burning up racetracks both across the country and internationally since the age of nine.

Now, at the age of 17, Yash has become the first Indian motorsport racer to have won the prestigious Pradhan Mantri Rashtriya Bal Shakti Puraskar. Hailed as one of the most promising emerging talents in the Indian racing circuit, he has a laundry list of achievements which includes 13 Championship wins, 59 race wins, and 11 awards.

Yash began his career as a go-kart racer in 2012 and soon made a name for himself on the track. In the JK Tyre Rotax Max National Karting Championship India 2014, he was awarded for Maximum number of Wins in a Championship for securing the highest podiums across categories.

Trained under and racing for Meco Motorsports, Yash has been mentored by Akbar Ebrahim, who was the first Indian racer to race on international circuits. “Akbar Ebrahim has always been my mentor-- everything I know, I have learnt from him,” he says.

Ebrahim’s mentorship has served his pupil well; in 2017, Yash made his transition from go- karting to Formula 4 racing. “My transition has been good as I have had a good foundation and I was able to score podiums in F4 in my first year,” he says. In 2017, he won 33 race podiums in one season, obtaining six more in the larger MRF 1600 and JK Euro Formula 4 BMW series in 2018.

Speaking about his family, Yash says they have been supportive, although they used to be concerned for his safety. “[My family] used to be worried, but now they are confident about my safety on the track. Racing on tracks is much safer than city roads these days.”

In November 2019, Yash was selected to race as part of Narain Karthikeyan’s SuperSpeed Chennai in the ‘first-of-its-kind’ multi-city motorsport championship in India, the X1 Racing League. “Motorsport is the next big thing in India,” he says. “I think India is ready for racing leagues of its own, with the right kind of support. The [X1] league has given us a great opportunity to showcase our talent.”

Determined to be a successful Formula1 racer and the best in the world in the coming years, he says the F1 driver Max Verstappen has inspired him the most. “I hope to drive for RedBull Racing one day,” he says.