Will the PM’s Pasmanda ‘sneh’ include ‘samman’?

After the BJP’s victory in Rampur and Azamgarh, the PM pushes for placating Pasmandas. Here’s a look at the demands and struggles of a major section of Pasmandas. 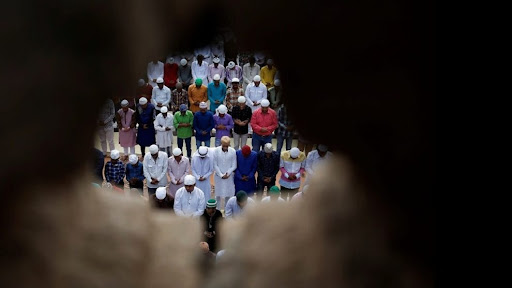 Prime Minister Narendra Modi, during the Bharatiya Janata Party’s national executive meeting held in Hyderabad last month, gave a call to his party cadre to address the issues of Pasmanda Muslims. The word Pasmanda means ‘those left behind'.

A party traditionally consisting of upper caste Hindus has made remarkable progress in gaining ground among the socially backward and Dalits. And now, eyeing to increase its footprint, the party is giving out signals about its next goal.

Opposition parties have faced criticism for giving tickets and other representations only to the upper castes or the Ashraf Muslims. The other two categories, Ajlaf and Arzal Muslims, considered to be Hindu converts, usually from lower castes are left behind.

It is in this context that the PM’s push for solving the issues that the Pasmanda Muslims face has revived concerns about the community. The PM called the party cadre to carry out ‘Sneh Yatras’ in order to placate the Pasmandas. However, the issues of the ‘left behind’ needs more attention than just ‘sneh’ (affection).

Seemingly unimpressed, former MP Ali Anwar Ansari, the head of the All India Pasmanda Muslim Mahaz, shot off an open letter to the PM questioning his intentions.

“It was a pleasant surprise to hear you talk about Pasmanda, but the Pasmanda Muslims want ‘samman’ (equality and dignity), not ‘sneh’," wrote Ansari.

Ansari and his organisation have been demanding recognition of Dalit status for many such sections of Muslims( or Dalit Muslims) and among the Christians, also called Dalit Christians, who can be accommodated in the Scheduled Caste category, and thus be given the benefits of reservations.

In 2021, while responding to a question on the floor of the upper house, the then law minister Ravishankar Prasad maintained the long-standing position of the Government of India (GoI) on the issue of extending reservations to Dalit Muslims and Dalit Christians.

“Dalit converts to Islam or Christianity will not be eligible for contesting parliamentary or assembly elections from constituencies reserved for SC, and cannot claim other reservation benefits”, the former law minister declared.

The government’s stubborn position also implies that the legal shield of ‘The Protection of SCs and STs (Prevention of Atrocities) Act’ was not extended to the Dalits of the two faiths.

The victims of the caste system facing generational discrimination are known to have converted to other faiths to escape the hostilities arising out of the same. However, the junking of their faith to adopt the other did not free them from the clutches of casteism since discrimination and unequal treatment has been entrenched into the Indian cultural landscape entirely, and is not limited to Hinduism.

Even for a Muslim or a Christian, a Dalit is a Dalit. The overnight conversion doesn’t absolve them of the trans-generational stigma attached. To put it simply, a Dalit neighbour looked down upon for decades is not going to get any different treatment after conversion. This, irrespective of which religion or community the oppressing neighbour has been. The very terms- ‘Dalit Muslims’ and ‘Dalit Christians’ speak for the caste burden carried forward.

The demand for a share of reservations stems from this social reality.

The decades-old demand by these two marginalized sections has been supported multiple times by several committees in the past. However, successive governments have treated Dalits in Islam and Christianity differently than those from Sikhism and Buddhism.

Following demands and recommendations, the Indian state extended the SC status to Dalit converts to Sikhism in 1956 by amending the Constitution (Scheduled Caste) Order, 1950 which stipulated that “no person who professes a religion different from Hinduism shall be deemed to be a member of scheduled caste”.

In 1969, 14 years later, a parliamentary committee, and in 1983 a ‘High Power panel on Minorities, SCs, STs and Other Weaker Sections’ too, acknowledged the unchanged societal behaviour and perception towards such converted individuals and advocated for caste concessions. On the latter’s recommendation, in 1990, the presidential order was amended again to include converted Buddhists into the SC fold.

However, those of its peers from Christianity and Islam were again left out. The reason given was the absence of any theological concept of caste in both these religions and that giving away Hindu identity had freed them from resultant discrimination, and the obstacles for their growth and upliftment had ceased to exist.

Fast forward to 1996, the centre reportedly, toiled with the idea to make the existing law religion-neutral in terms of recognising SC’s religion but soon backtracked upon receiving divided opinions from state governments driven by their political calculations. All this, despite two back-to-back ‘Backward Class Commission’ reports, in 1955 and 1983 (Mandal Commission), highlighted the plight of converts and observed that religious conversions failed to induce (vertical) socio-economic mobility.

The much-touted Sachar committee in 2006 and the Ranganath Mishra Commission in 2007 also sought attention for Islamic and Christian Dalits and spoke about the plight of the converts.

With an aim to get an even more precise observation, a 2-member committee submitted a report on ‘Dalits in the Muslim and Christian Communities to the Government of India in 2008 and said- “...there is a strong case for including Dalit Muslims and Dalit Christians in the Scheduled Caste category.”

However, one of the biggest impediments to the cause of such converts is the unavailability of their actual number. A number that could be uniformly agreed upon. Scholars and activists estimate their presence in the proportion of 50-75% of all Christians in India. This lack of clarity arises mainly due to the fact that such categories are not recognised by the census, and under different states the self-identification of these groups varies.

In an attempt in 2008, a study commissioned by the National Commission for Minorities, the total number of Dalit Christians and Dalit Muslims were pegged at 3.2 million of which 2.4 million were Dalit Christians and 800,000 were Dalit Muslims. Even relying on these numbers arguably implies that today,13 years later, these categories constitute a substantial chunk of India’s total population.

On the economic front too, they seem to be faring worse than their brethren from other faiths. While Dalit Buddhists fared worst as 45.9% of them belonged to Below Poverty Line (BPL), Dalit Muslims came in next with 40% below BPL, Dalit Hindus at 38%, Dalit Christians at 30.1% and Dalit Sikhs at 7.6%, according to the National Sample Survey Organisation’s monthly per capita expenditure statistics in rural India (2004-05).

The battle has been stretched for a long time. Though, the Indian state has time and again justified this institutionalized discrimination. The very first government of independent India under the leadership of Jawaharlal Nehru was of the view that caste and its many manifestations plagued Hindu society only and that other major religions were relatively egalitarian. Notwithstanding this, as noted earlier in this essay, the government subsequently extended benefits to Dalit Buddhists and Dalit Sikhs. Given the fact that neither Sikhism nor Buddhism per se formally propounds caste or any inequalities among its followers- like Christianity and Islam – the extension of SC status only to them reeks of logical inconsistency.

When the matter reached the Supreme Court, the ruling was against the Dalit Christians and Dalit Muslims. However, this judgement brought with it several problematic perceptions to legal arguments. For instance, the court held that a Dalit convert is eligible for reservation benefits so long as they can validate their ancestral history tracing to Hinduism.

This judgement infringes upon the constitutional right of ‘freedom to religion’ as it indirectly justifies one’s religion as an obstacle to equal treatment and a reason big enough for the state to overlook their socio-economic condition.

In the same ruling, the court took a contradictory position. “Once such a person ceases to be a Hindu and becomes a Christian, the social and economic disabilities arising out of Hindu religion ceases and hence it is no longer necessary to give him protection and for this reason, he is deemed not to belong to a scheduled caste”, says the ruling while denying the safety net to Dalit Christians and Dalit Muslims. In the same breath, however, while explaining why a convert to Hinduism is eligible for such benefits, it acknowledges that Scheduled Castes “embrace other religions in their quest for liberation, but return to their old religion on finding that their disabilities have clung to them with greater tenacity”. At this point, the court rejects its argument of a convert being emancipated of all religious stranglehold restricting one’s progress.

Though a plea to the Supreme Court remains pending, the question is will the PM’s Pasmanda outreach follow up with an end to the religion-based discrimination in reservations? Only time will tell.