Street Vendors across Bangalore face a number of challenges every day. We explore the legal aspects and the provisions available for their protection. 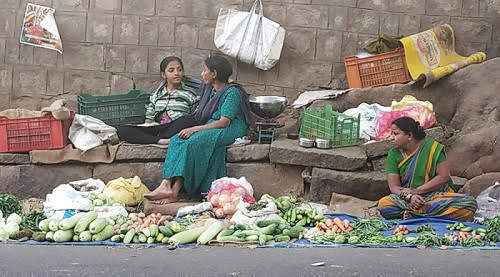 Street vendors face a number of challenges every day

Bangalore: "I have bought weights more than three times now. But every time the policemen come, they snatch them away," said Lakshmi who sells vegetables on the roadside. This is the plight of many of the street vendors. They face challenges every day with respect to running their business, keeping up with the weather conditions, and in addition to these, they have to either bribe the policemen or hide away from them.

To protect the street vendors, Bruhat Bengaluru Mahanagara Paalike (BBMP) had to issue ID cards and set up Vending Zones to regulate their business. However, the last survey was conducted back in 2017. "In 2017, we conducted a survey and have issued ID cards to 4,000 vendors across the zone. We have not received any further orders to include other vendors," said a BBMP official of the south zone. But the success of this survey is not evident since the street vendors of the city are still suffering and the number of vendors who have received the ID card is small. " Yes, in 2017 the BBMP conducted a survey of the street vendors. But it identified only 25,000 people across the city whereas there are more than one lakh of them. Even out of the 25,000 people who were recognised, only 14,000 have received their ID cards," said Babu, Chairman of the Bangalore Street Vendors Association.

The Supreme Court's judgement of 9 September, 2013 says : "All the existing street vendors operating across the country shall be allowed to operate till the exercise of registration and creation of vending zones is completed." Subsequently, in 2014, Street Vendors (Protection of Livelihood and Regulation of Street Vending) Act was passed by the Unionl Government to protect the rights of the urban street vendors and to regulate street vending activities and for matters connected therewith. Even after all these measures, the street vendors of the city are still on the boil. Five years after the Act was passed, the Karnataka Government still had not made any changes nor had it published an official report. However, the High Court of Karnataka, in June 2019, questioned the State authorities regarding the delay and sought for an explanation. Following this, the state government published an official notification on June 12, 2019. The notification put down the rules and the committees to be formed in this regard.

Now, the Town Vending Committee (TVC) has been formed in seven zones across Bangalore and the committee has representation from the street vendors association and BBMP officials. The Vending Zones are yet to be formed. However, the TVCs have still not been completely functional. "According to the information I have received, the Union Government has instructed the State to form all the TVCs within February 20, 2020, and these TVCs should be completely functional. We hope that all the TVCs start work at a faster pace and we also want to recommend the committee to conduct a new survey to help the vendors," added Mr Babu.

"I have been selling vegetables and fruits for 40 years now. Running the business has become difficult lately. I wish the government could support us with some benefits and help us to run our business without having to bribe policemen," said Rudrappa, a vendor near the Malleshwaram market.

If the TVCs function as expected and if a new survey is conducted, many such vendors could get an ID card and a recognition. The ID cards issued will act as an identity for the street vendors and will help them avail the facilities provided by the government. Vendors can also apply for bank loans with the help of this identity. Also, the vendors can easily run their business without the fear of the policemen.