Who Is Responsible For This Disaster?

Residents rehabilitated as the tilted Vinayaka Nagara building is demolished. 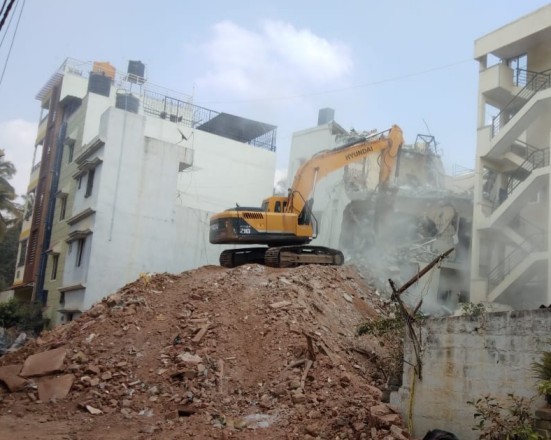 The four-storey building was demolished

Bangalore: On Wednesday, February 5, the residents of Vinayaka Nagara woke up to witness the aftermath of an unfortunate event. A four-storey residential building had tilted backward, rendering the residents homeless overnight.

The building in question was a three-year-old structure with a weak foundation, according to the workers who cleared the debris. They said that this happened because of improper work done while digging a borewell below a building adjacent to the tilted one. A 10-by-10 feet borewell was dug out in the adjacent building but because no proper steps were taken while building it, the water seeped into the foundation of the next building, thereby weakening it, they alleged. An official complaint was registered against Chengalraya Babu, who owned the adjacent building and Rahul Jain, the owner of the building which tilted, as he hadn’t taken the permissions from the BBMP for the structure.

The work to clear the debris started on the morning of the mishap and continued till the evening of February 14. The workers worked in shifts, from 7 am to 7 pm. There was a delay in clearing the debris because of the crowd and media persons who thronged to the narrow. The workers said that despite the cracks the exterior of the building remained strong.

“The building housed 30 people, including students and a few families,” a resident of the neighbourhood said. There were no casualties as they were quickly evacuated out of the building. The residents in the vicinity of the cracked building have been asked to move to safe areas and the affected residents were moved to rehabilitation centres set up at government schools and hospitals in Amruthalli.

The workers from BBMP refused to comment on the incident. “We are here to solve the problem not to elaborate on the reasons and that is not our job,” said one of the workers.

The Vinayaka Nagar area is a narrow lane with several residential structures and the incident has made commuting difficult. This was the first time such an incident took place in this neighbourhood which has added to the hardships of the residents. They hope that the authorities will take strict action against those responsible for the mishap.