The ninth edition of Oxfam walkathon witnessed 404 teams walking 100km and 50km to raise money for a cause. 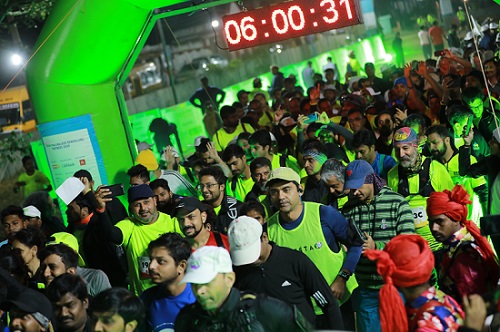 A flood of participants at the start-point of the 100-km walkathon. Image Courtesy: Ankit/Oxfam

By Hita Prakash and Sneha Ramesh

Nandi Hills (Karnataka): The fitness craze has caught on to the people living in the Silicon Valley of India like never before. The weather of this city coupled with various options ranging from Yoga to rock-climbing is an added advantage to push one’s physical limits further.

In recent times, another major event is gaining popularity in the busy calendar of marathons for Bangaloreans to look forward to each year. The Oxfam Trailwalker is a 100-km and 50- kilometres walkathons which are held on the outskirts of the city during the winter months. The participants have to form a team of four, raise a minimum fund of Rs. 80,000, and are given 48 hours to complete 100 km and 24 hours for 50 km respectively.

The event has participants who predominantly belong to corporate companies and they take up the challenge for a social cause attached to this two-day fundraiser in support of Oxfam India’s battle against inequality. The proceeds are utilized to help improve the living conditions of the marginalised in society.

The ninth edition of the event began on a chilling 7 February,2020, morning as teams arrived at Sulthanpet, a village in the Nandi foothills, the start-point of the race. Drummers welcomed the 202 teams and the performance acted as a fun warm-up session before the flag-off at 6 am. “This is my first time as a participant in such a race. We are here to test our endurance along with getting to know each other better and are excited to get started. We are proud of our association with Oxfam for a noble cause,” said Paul Dupuis, MD and CEO of Ranstad India. 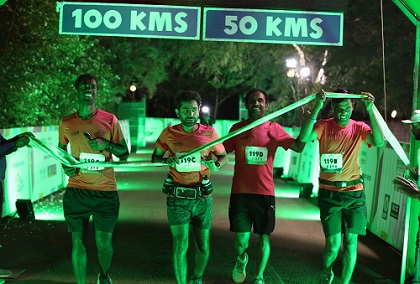 “Heart and Soul Runners” finishing first in the 100-km walk

The opening speech was delivered by Amitabh Beher, CEO of Oxfam: “We are happy to see more participation this year and the enthusiasm is contagious.” There were nine checkpoints, approximately one at every 10-12 km, in which the participants were required to check-in and out to keep track of their timing. This also served as a resting area, fully equipped with physiotherapy, medical assistance, ambulances, toilets, and refreshments to help rejuvenate the competitors. The trail passed through 30 villages in the scenic rural parts of Karnataka which included some tough muddy tracks and terrains for the teams to tackle.

The participants did not pay heed to the blisters and aches slowing them down as the constant encouragement from the local people cheering them boosted their spirits to forge ahead. Though team number 80, “The Amadeus Runners”, consisting of three French nationals and an Indian, led the pack throughout the 100-km trail and crossed the finish line in 18 hours and 19 minutes but one member retired at checkpoint eight that resulted in them not being crowned the champions. While the fastest all-men team were “Heart and Soul Runners” clocking 20 hours 10 minutes; the “Ninja Girls” were the fastest all-women team with 21 hours; and the fastest mixed team was “Red Hot Chilli Steppers” who finished in 21 hours 57 minutes.

An additional 202 teams gathered on 8 February at checkpoint four to begin the 50-km race that flagged off at 6 am. A team consisting of an Indian, a South African, a French, and an Irish, who called themselves “Keeping up with the Kenyans”, lived up to their name by crossing the finish line first, in 7 hours 23 minutes. 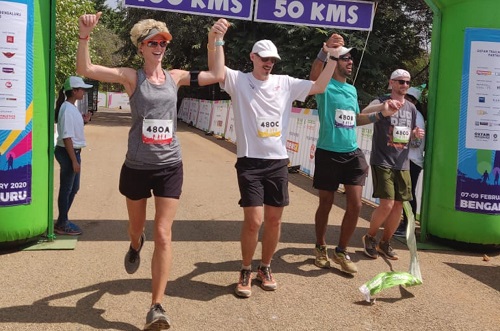 “Keeping Up With The Kenyans” celebrating their 50-km victory

“The event was well organised with volunteers doing a stupendous job of making sure each of us is attended to whenever required. This is a once-in-a-lifetime experience,” said Alison Dumbell, after completing her ninth trailwalker; each one in India. With 800 volunteers across 12 organisations, an enthusiastic 78-year-old in the 50-km event to a woman determined to finish 100 km clad in a saree, the walkathon had all the flare and flutter throughout.