What Rahul can learn from Chief Minister Modi

Bharat Jodo Yatra is approaching its end. But Rahul's effort has failed to capture the country's imagination. Here's what he can learn from Chief Minister Modi. 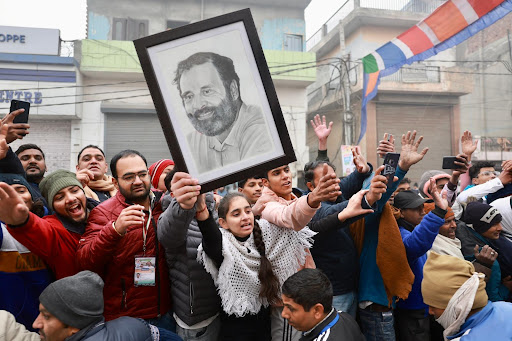 People cheer for Rahul Gandhi as he passes by. Credits: Twitter/Bharat Jodo

Can a 3,500 Km long foot march be effective enough to rebrand a bombed brand? Despite all its noble claims, the Bharat Jodo Yatra (BJY) began at the face of this question. Today, as the yatra approaches its end, the question is eligible to get an answer.

To be fair, the BJY has passed through difficult political terrains but has managed to draw decent, if not huge, crowds more often than not. Participation of opposition politicians, civil society members and several celebrities, though not A-listers, has provided some heft and contributed to the headlines for the yatra. Adorable and engaging pictures and videos featuring Rahul Gandhi have been a constant through the course of the Yatra.

No doubt, they generate goodwill among those watching.

However, the visually rich yatra is high on symbolism but falls short of substance by failing to make emphatic and qualitative assertions to create a powerful counter narrative against the predominant Hindu nationalism. Rahul Gandhi's speeches and his yatra has too homogeneous and ambiguous messaging which makes it difficult for a common man to construe the motivation behind the march. As a consequence, Rahul's Yatra is making itself look like a walkathon that only knows its destination (Srinagar) but not the destiny.

Hearing Rahul throughout the yatra only reinforces one of their beliefs about his most obvious shortcoming. His oratory skills. However, his problems get compounded due to his incomprehensible and bordering-on-gibberish talks. It definitely doesn't augur well for a politician who aims to challenge a master-orator like Modi.

"I have killed Rahul Gandhi" or "open(ing) mohabbat ki dukaan in every nook and corner of the country" kind of statements are the ones that make headlines. In political journalism, the headline statement holds the key to an address, and the way it reflects in the minds of listeners and readers. The headlines coming out of his speeches end up either confusing or amusing a citizen who wants to see if there's a different but compelling agenda and vision for governance.

Rahul's inexperience as an administrator doesn't help his case either. He has no prior experience in governance. His refusal to be a part of the union cabinet in 2004, as time passes by, has only ballooned into a bigger and bigger blunder on his part. His raw but entitled public life has aided Bharatiya Janata Party (BJP) with abundant ammunition to construct a personality of his in the public discourse that has stuck to him despite desperate attempts to get rid of it.

No doubt Bharat Jodo Yatra is also a project to relaunch Rahul Gandhi and establish him not only as the undisputed leader of the Congress party but also of the united front in the run-up to the general elections 2024. But BJY, by all metrics, can only get limited success.

It is here where Rahul can take a cue from Modi and his transition days. From a tainted CM who drew relentless backlash for presiding over bloodshed, from both the national and the global press, to a prime ministerial candidate whose euphoria engulfed entire India in a span of few years; Modi's journey offer lessons on rebranding.

Modi through social media, advertising and summits like 'Vibrant Gujarat' reconstructed his image of a development-oriented leader; a man who meant business. He was able to acquire an audience for an alternate reality called the 'Gujarat Model'. Veteran journalist Rajdeep Sardesai in his book '2014: The elections that changed India' mentions a PR agency (APCO) that Modi reportedly hired for his image makeover. "The brief was simple– market Modi globally and sell the Vibrant Gujarat image. His speeches became more deliberate; the chief minister's office would release well-sculpted images of a 'softer' man- reading a book, playing with children, flying kites. Modi even got a book on climate change ghost written which was released by former president A.P.J. Abdul Kalam."

However, Rahul Gandhi doesn't suffer from the same set of personality ailments. He already enjoys a reputation as a good-hearted gentle human being (with all his shortcomings). Instead, he needs to project himself as a capable leader, a prime minister material, like CM Modi. The image of a non-serious and non-committed part-time leader for long has been pulling him down. His interactions with different groups of professionals, farmers, MSME owners etc. during the ongoing yatra needed better marketing. Running, piggybacking kids on his shoulders or hugging people, which gets the maximum footage, is not going to establish him as an alternative to Narendra Modi.

The biggest obstacle for him to being an alternative to Modi, in my mind, remains communication. Far too many bloopers are embarrassing. The BJP IT cell is quick to latch onto them and disseminate them to millions in seconds.

Modi again is the one to look up to for Rahul. Two almost invisible plates of glass angled at a 45-degree slant at either side of his podium, called teleprompters, is the best kept secret of Modi. However, Congress leaders and their supporters have only mocked him for the usage of a technology that global leaders have relied on for very long. It is immensely helpful in delivering intended messages without making oratorial blunders and gives an impression of a leader who is smart and is able to connect with the people.

Charges of nafrat can better resonate if Rahul mentions a few of many instances and puts across his stand in a lucid and coherent way. When a well-known leader of his stature, who is on a painstaking pad yatra apparently to reunite the country, bells the cat without mincing words, that's when a brewing crisis receives the gravitas it urgently requires. So rather than making fun of Modi, Rahul Gandhi must take a cue from him, course correct and use the technology. It is far worse to be mocked for reading a teleprompter than making gaffes that make you sound funny, repeatedly.

Unless Rahul Gandhi amends approaches that have defined his devastating personality traits, it is only wishful thinking to imagine a Bharat Jodo Yatra would be able to relaunch him. And until that happens, you can always pull off a leader from Rahul Gandhi, but can never eliminate a 'Rahul Gandhi' from that leader.