If alive, Kanshi Ram would have been pained to see the party he founded being outsourced to a certain family. 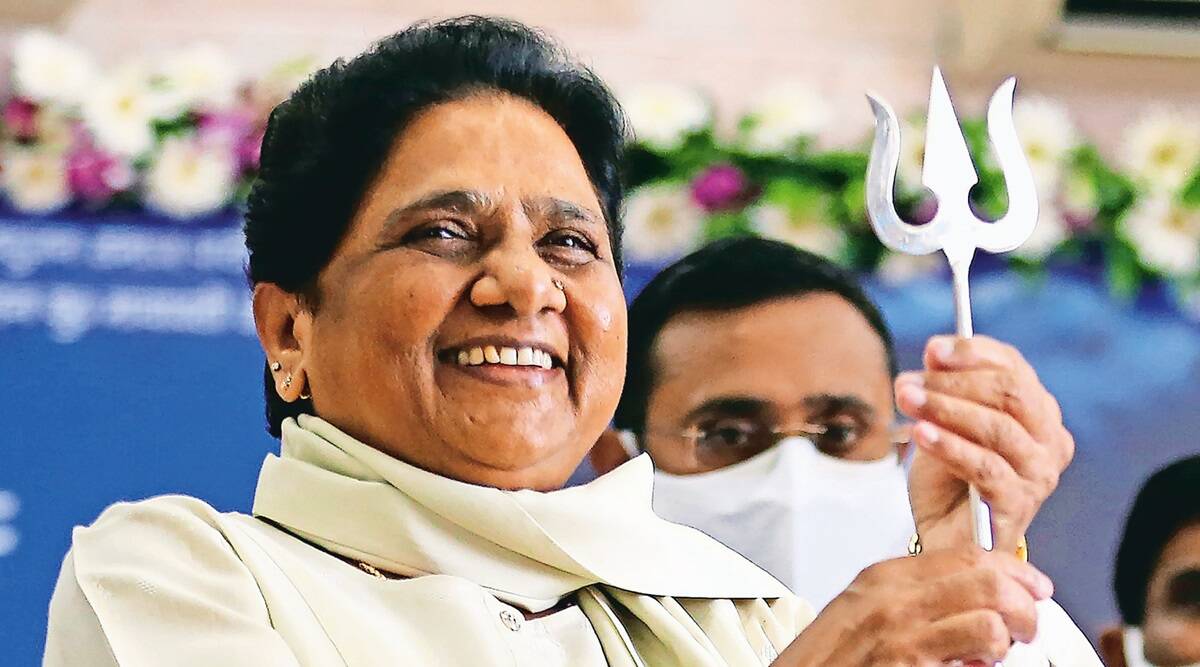 For the BSP, overtures to the Brahmins to recreate the magic of 2007 fell flat. (Express Photo)

The catastrophic performance of the party in the recently concluded Uttar Pradesh assembly elections sent shockwaves across the Bahujan Samaj Party (BSP) cadre. Mayawati's party have been absolutely decimated to just one seat in the 403-member strong assembly. The BSP saw its vote share plummet to 12.88 %, the lowest since 1984- the year of its inception.

Speaking on the lacklustre performance of her party, Mayawati or behenji, as she is popularly referred to, apart from customary statements over a loss, appeared to have shifted the blame on Muslim voters who strongly backed Samajwadi Party this time around.

“To defeat the BJP, Muslims shifted their votes from the tried and tested BSP to the SP. This wrong decision cost us heavily because the fear spread among BSP supporters, the upper-caste Hindus and OBCs that if the SP comes to power, there will be jungle raj once again. So they went to the BJP… This is a harsh lesson for us… that we trusted them… We will keep this experience in mind and change accordingly”, The Indian Express quoted Mayawati as saying.

However, a closer look at her campaign as well as some of the political calls taken by her in recent pasts paints an altogether different picture.

Dull and off-track campaign
While Maya blames Muslims for rallying around the SP and scripting her debacle, the fact remains that it was not just Muslims but even her core Jatav Dalit base didn’t back her as staunchly as before, let alone any other OBC or Dalit community.

Jatavs, to which Maya herself belongs, had stayed loyal to the BSP through thick and thin. Surprisingly, even they appear to have deserted the party this time around. Jatavs form around 14% of the total SC population in the state, but the BSP could gather only 12.88 % vote. This is a huge downslide from the 2017 vote share of 22.2%, higher than SP. Thus, adding credence to the chatter of Jatavs no more seeing her even as a challenger.

The credit for the abysmal show goes mainly to an absolute dull and off-track campaign that BSP led under her watch. Throughout the polls, Maya did just twenty rallies in total. Instead, she prioritised her conventional approach of reading out written statements or tweeting about issues, which clearly didn’t find many takers.

The campaign seemed off track in the sense that the party and her trusted lieutenant Satish Chandra Mishra focussed extensively on regaining Brahmin support to recreate the magic of 2007. A host of programmes like ‘Prabudh Samaaj Goshthis’ (Enlightened class conference; read Brahmin Sammelans) received inordinate resources and time.

This was preceded by promises to continue several ongoing temple projects in the state and Mishra visiting Ram temple in Ayodhya.

By all accounts, the BSP’s campaign was lopsided around wooing Brahmins, who are BJP’s core voters, and less about the issues that impacted Dalits and backwards. Needless to say, the Muslims, on whom Maya pins the blame, had near to nothing to look forward to in Mayawati and her party as she too, like others, maintained silence as they continued to tackle the heat under a Hindutva regime.

The lost opportunity
Getting the Brahmins back under her party fold was not just a pre-election instinct, rather, a sustained outreach had been witnessed right since the 2019 Lok Sabha loss. In what was a major shift, the BSP now had Brahmins as the leader of the party in both the houses of parliament.

Satish Chandra Mishra, the national general secretary, is the one leading the party in the upper house. However, the assembly elections saw Mishra in an unprecedented commanding position, as well as getting the media traction due to the absence of Mayawati.

Mishra and his family-son and wife- were seen taking the lead during campaigning. The loyalist is now the only well-known BSP leader in the state since Mayawati wiped off every second rung Dalit leader in her party. The BSP supremo has also been facing heavy desertion by her partymen since the 2019 poll debacle.

And, as things stand today, Satish Mishra (and his family) seem to have taken over the responsibility of the party. A party founded by the late Kanshi Ram to give voice to the Dalits and marginalised is on the verge of slipping into the hands of a Brahmin- a community he had warned Dalits against.

Kanshi Ram, well aware that eradicating caste was an uphill task, prioritised arming Dalits and backwards with political consciousness. He insisted on the importance of taking the roles of leadership in politics for the historically oppressed. This, he believed, would pave the way for social transformation and establish an egalitarian society. The late Dalit leader gave his sweat and blood to make BSP, a national party, what it had been until today. If alive, Manyavar Kanshi Ram would have been pained to see the party being outsourced to a certain Mishra and his family.