Were these required at all?

Mr Vinay Sreenivasa, a Bengaluru-based advocate, spoke about how the farm laws can affect not just the farmers but also every Indian. 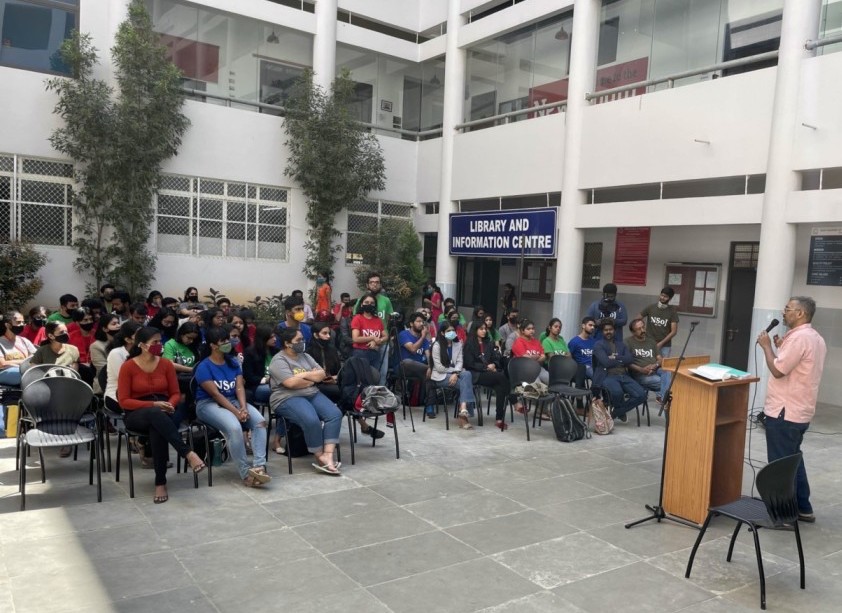 Mr Vinay K Sreenivasa, a Bengaluru-based advocate, joined students at the NSoJ quadrangle for a discussion on the farm laws that came into force on September 20, 2020. After taking a quick expectation check from the audience, Mr Sreenivasa set the ground to gain a better understanding of the farm laws.

He began by specifying that the laws in question were not only the three laws brought in by the Centre, as Karnataka also brought in four laws around the same time. “If there is an agreement in this country about anything, it is about the fact that agriculture is in crisis,” he stated, adding that in India, 86 percent of the farmers are small farmers, that is, they own less than two hectares of land (less than 5 acres).

Secondly, a few hundred farmers commit suicide every day in India but there exists a gender bias in these statistics. Women farmers are not considered as such by the government, hence the statistics collected by the National Crime Records Bureau (NCRB) do not include women farmer suicides.

Thirdly, farming has become unviable today, it is very difficult to farm, he said. Chemical-intensive agriculture has high input costs, as compared to the prices that farmers receive, which are very volatile. “Farmers don’t get to decide the prices for their own products,” he added.

Added to this is the issue of climate change that is affecting farmers who depend on erratic rains for farming. Farmers are also trapped in a debt cycle and have a hard time obtaining loans. Even if they do, they are unable to pay them off without reaching out to private money lenders. All these issues increase the burden on the farmers.

“The Mandi system was introduced to ensure transparency and accountability; there is an auction of prices where registered traders bid and buy the products. The APMC (Agricultural Produce Market Committee) is a democratic institution as members of the committee are elected by the farmers and traders,” Mr Sreenivasa said. Here’s where the problems arise: one, there aren’t enough APMCs in India, therefore 60 per cent of the produce is sold outside these institutions, and two, traders have been involved in corruption and cartelisation in these APMCs.

“The biggest problems for the farmers were the volatility in prices and being caught in a debt cycle,” he said. The government set up the National Commission on Farmers headed by Prof. M. S. Swaminathan, to address these issues, and it presented a report with suggestions but this was not implemented by the government. 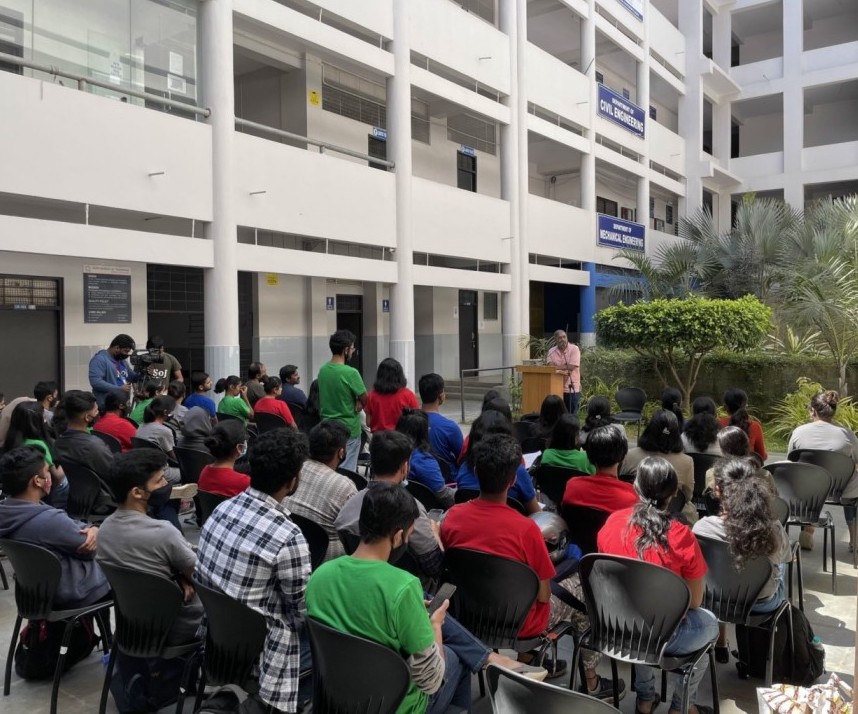 Mr Sreenivasa included the demands set forward by a pan-Indian umbrella organisation of farmer organisations, the All India Kisan Sangharsh Coordination Committee, who drafted two laws, one of which demanded assured fair prices for their produce, while the other one demanded freedom from indebtedness. But the bills weren’t discussed in the Parliament.

The pandemic made it worse for the farmers. Farmers couldn’t travel to APMCs to sell their produce as the police would seize their products and send them back. In the midst of this crisis, the government pushed the farm ordinances and the laws came into force.

Mr Sreenivasa then explained how the three laws were going to affect the farmers and how the farmers' demands were not paid heed to time and again. The laws allow trade to take place outside the APMCs and ensure that state governments cannot charge cess on trade that takes place outside these mandis. This would dismantle the pre-existing organised system for trade that was in the APMCs. The new laws also include that one need not be registered to become a trader, third-parties can enter the discussion and if there is a dispute between the farmers and traders, they cannot go to court. "The State should invest in agriculture but what the three laws are doing is the exact opposite. The government is trying to reduce its role in agriculture."

He also briefly touched upon the amendments made by the state government during the pandemic in the Land Reforms Act and the Industrial Facilitation Act, which now made it possible for non-agriculturists to buy agricultural land to set up industries. These industries could take up to three years to obtain permits. Mr Sreenivasa elaborated on the modified labour laws, which is an additional blow to people in the lowest rungs of society.

After a quick question-answer session, Mr Sreenivasa closed the talk by urging students to read and create more content to inform the public about what is fact and truth.