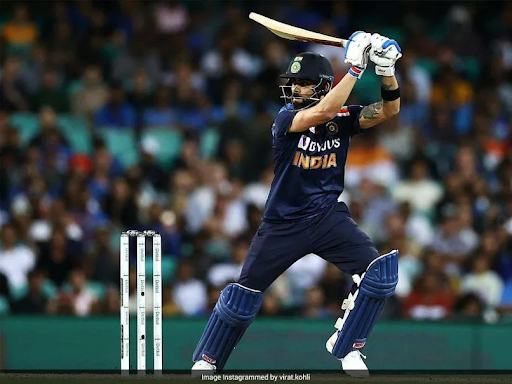 Virat will continue to lead team India in One Day Internationals and tests.

Putting an end to the rumours, in a note released on his social media platforms, India’s prime batter Virat Kohli decided to rest his shoes in the T20 internationals. Kohli will officially retire as the captain of the Indian T20 team after the conclusion of the T20 World Cup in UAE later this year.

The Times of India reported the possibility of Virat giving up captaincy in their recent report but the BCCI Treasurer Arun Dhumal denied the rumours in the board’s verdict then. “BCCI has not met or discussed anything on this issue (split captaincy),” said Dhumal. However, Virat Kohli himself cleared the air by legitimizing the claims.

Although the board hasn’t yet named the new T20I captain, it's a foregone conclusion that the current 34-year-old white ball Vice-Captain Rohit Sharma might take over.

In his statement, Virat Kohli cited workload to be the reason for his decision. “Understanding workload is a very important thing and considering my immense workload over the last 8-9 years playing all 3 formats and captaining regularly for the last 5-6 years, I feel I need to give myself space to be fully ready to lead the Indian team in Test and ODI cricket,” wrote Virat.

In an official statement by the board, BCCI Honorary Secretary Jay Shah said that the board has a “clear roadmap” for the team. He also ensured the transition of leadership will be smooth. The decision might have been sudden to the fans, but according to the BCCI, they were in contact with the team management regarding the same for the last six months.

Talking to NSoJ, cricket analyst Gurkirat Singh Gill (@gurkiratsgill) said that Virat giving up the captaincy of his IPL team would have made sense, but cited the difficulty in such a decision due to the pressure from the franchise. After retiring from tests in 2014, even MS Dhoni continued to captain his Indian Premier League team.

From the 45 T20s where he has captained India, Virat has won 27, with an impressive win percentage of 65. The next two years will be having major limited overs’ ICC events with the 2022 T20 world cup and the 2023 ODI world cup.

The decision has been met with a mixed response from the netizens. While many have lauded Virat for his impressive record in the shortest format as a captain, a few are apprehensive about the immediate future of the Indian team post World T20 next month.