UP CM’s deputy is making communally charged speeches. Here's why...

Polls aren’t the only driving point for Keshav Maurya, who is positioning himself as the face of hardline Hindutva 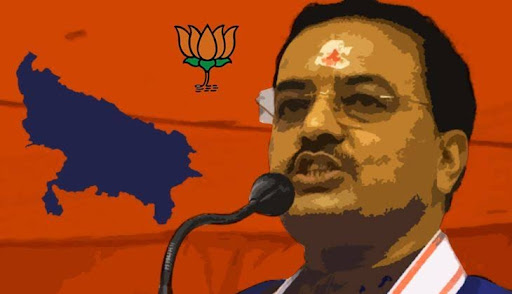 Maurya, the tallest OBC face of the UP BJP cadre, bids for a cross-caste appeal. Credits: Patrika

On December 1st 2021, five days before the anniversary of the Babri masjid demolition, Yogi's deputy Keshav Prasad Maurya put out a slogan-like tweet that stirred a storm in the state's politics and cleared any confusion over the BJP's poll plank.

Maurya's statement apparently extends legitimacy to a recent call given by the Akhil Bharat Hindu Mahasabha, a Hindu religious body, to install an idol of Lord Krishna inside the Shahi Idgah mosque. The mosque is located adjacent to the Krishna temple complex in Mathura. However, anticipating law & order issues, the Mathura district administration had proactively imposed section 144 in the area following which the Mahasabha called off their plans.

Two days after the tweet in question was posted, on 3rd December, while addressing a 'Vyapari Sammelan' (Entrepreneurs Meet), he added to his newfound dog-whistling spree, that before 2017 (when BJP came to power in the state), goons dressed in lungis and skullcaps ran the show in the state and it was his government, he claimed, that freed the state of this menace.

With elections a few months away, more instigating and communally charged statements of similar themes are of high probability.

Keshav Prasad Maurya, a Kushwaha (OBC), has been at the centre of the BJP's politics in the most vital state of the country. However, his shift to constantly making communal statements has more to it than just the approaching elections.

The Face of hardline Hindutva
The real aim of Maurya is not just to ensure the BJP's continued rule in the state but to position himself as the face of hardline Hindutva. The lack of it, he believes, cost him the 'kursi' last time when the party’s high command sprang a surprise in the form of Yogi Adityanath.

Yogi Adityanath, the saffron-clad head-priest of the Gorakhpur Mutt and five-time MP, though not in contention, had a cross-caste appeal due to his Hindutva flamboyance, and this was understood to be the decisive factor in picking Adityanath instead of Maurya. Since then, Keshav Maurya has been simmering in discontentment for failing to make the cut despite being so close.

Then MP from Phulpur, once a Nehru-Gandhi fortress, Maurya had his influence limited to the Kaushambi-Allahabad-Varanasi belt, though many believe that he helped BJP consolidate non-Yadav OBC votes and thereby helped the party shed its upper-caste party tag.

Maurya, who is dear to the RSS, was at the helm of BJP's victory in 2017 in the capacity of state chief of the BJP. He has been closely linked to the Sangh Parivar and its subsidiaries like the VHP and the Bajrang Dal from an early age.

Despite facing flak for his mishandling of the second wave of Covid, even from party inner circles, that too publicly, Yogi has managed to salvage his position. By not accommodating bureaucrat-turned politician AK Sharma, parachuted by BJP supremos Modi and Shah, in his cabinet, he had successfully showcased his defiance and displayed the authority that he commands in political circles.

Though he is wary of the negative publicity owing to several administrative hiccups, he appears to be cosying up to the PM, the ultimate vote-catcher.

On November 20th 2021, Adityanath tweeted images of himself and Modi which grabbed a lot of attention. Both of them were seen engaged in a deep conversation with the PM's arm around his shoulder. He captioned about their resolve to build a better India, and not, interestingly, just UP.

However, in what didn't go unnoticed, six days later, during the course of a rally in Adityanath's bastion Gorakhpur, Modi raised the hand of both Maurya and Yogi simultaneously. This wasn't the best deal for a brand Yogi. On the other hand, the gesture suggestive of collective leadership added wings to Maurya's aspirations.

Buoyed by the sheer symbolism of the action, on December 9, Maurya was quick to make a courtesy visit, with no definite agenda, to PM Modi in New Delhi. 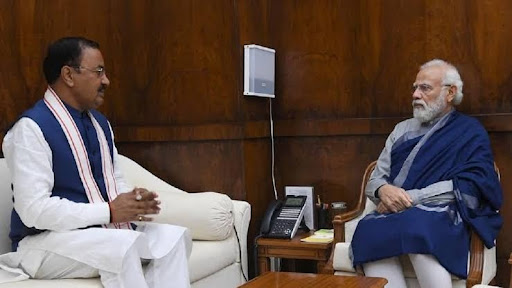 Maurya is said to have sold tea and newspapers in his childhood. Apart from the OBC identity, this is the second commonality among the two. Credits: twitter/kpmaurya1

Notably Yogi's deputy has been referring to "hamari" (our's) sarkaar (government) and not "Yogi govt." while praising their government for many achievements. His Twitter timeline, too, these days is indicative of his approach and the way he wants things to be perceived. Otherwise, nothing explains why a deputy's image would be featuring ahead of his boss or, on most occasions, equal in size, if not more. 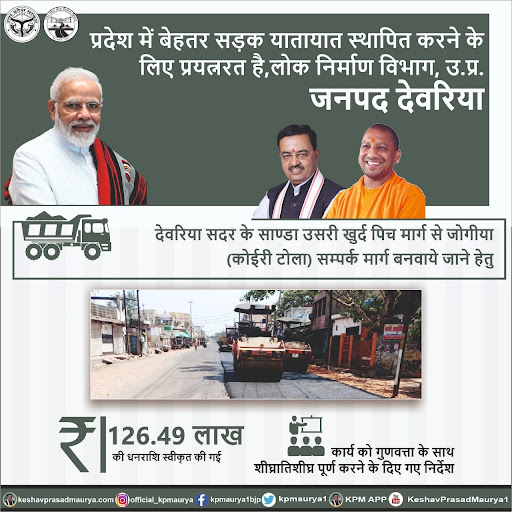 To an uninitiated one, it could be difficult to figure out who among the two is and isn't the CM. Credits: twitter/kpmaurya1

As interesting as it might be, with the campaign for assembly polls picking up rapidly, his social media timelines feature comments made by the likes of Modi and Nadda. There's an absolute lack of Yogi on his timeline, at least for the last one month. No images, no quotes, is making Adityanath look absolutely absent out there.

Clearly, he is charting his own course instead of adopting a seemingly servile attitude towards Yogi. Though Maurya realises that there isn't any opening yet for UP's chief-ministership, taking a cue from his saffron-robed senior could add heft to his political persona and propel him sooner to where he couldn't be the last time around.

Keshav Maurya's politics greatly resembles that of his BJP counterpart in MP, Narottam Mishra. In his attempt to hasten the inevitable downfall of Shivraj Singh Chouhan, who isn't the BJP leadership's favourite, Mishra, the current Home Minister, has taken the route of communal whistling to establish himself as the natural choice through greater mass appeal. Though, a major odd point for Maurya is that Adityanath is a rising force, with his best days yet to come.