“A chance to connect with the mainstream,” said IAS Officer and Noida MD Ritu Maheshwari. 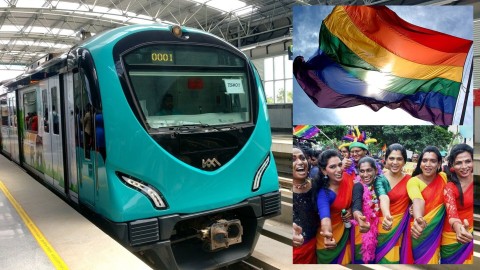 By Priyanka Giri and Vaidehi Dhakate

Inspired by the Transgender Persons (Protection of Rights) Act, 2019, Noida (short for New Okhla Industrial Development Authority) has decided to dedicate its Sector 50 Metro station on the Aqua Line to the Transgender Community. “This initiative has been taken to uplift and provide employment to the Transgender Community," said Ritu Maheshwari, IAS and MD, Noida. She further stated that the metro service will provide transgenders with opportunities to work, making them self-reliant and enabling them to walk their own paths.

When it came to naming the station, the operator initially thought of naming it ‘Rainbow’. However, the Noida Metro Rail Corporation (NMRC), extremely proud and privileged to have such qualified members of the transgender community as part of their family, christened it ‘Pride Station’. Several suggestions from individuals and NGOs like Nazariya were considered to better understand the community’s concerns. Workshops were also conducted by the NGO to sensitise the NMRC staff about transgenders.

Citing the 2011 Census figures, the NMRC MD stated that out of 4.9 lakh transgenders in India, 30,000 to 35,000 reside in Delhi-National Capital Region (NCR). Out of them, six members have been employed currently at the station as ticket collectors and housekeeping staff. The corporation is also working towards building restroom infrastructures and a separate frisking zone. The aesthetics and artwork at the station were also made in accordance with the essence and spirit of the community. NMRC has also planned to organise campaigns supporting the initiative and creating awareness among passengers through messages, signages and announcements within the trains and station.

Kunal, a member of the housekeeping staff at the station, said he often received positive comments from commuters. “This job is very important to me as I have a partner and children at home. Further, sex reassignment is a long and expensive process. I am still undergoing treatment and yet to undergo the surgery,” he said. Sex reassignment process takes up to three years and can cost Rs 1.5 - 4 lakh.

Preeti Batra (27), who is also employed in the housekeeping department, said, “I am also saving up for the sex reassignment surgery. I have saved up Rs 1 lakh in the last few years.” Preeti worked at an NGO where she earned Rs 10,000. Now she draws a salary of Rs 14,000. She also wants to clear the stereotypes in people’s minds regarding transgenders: “When people think of transgenders, they think of those on streets asking for money. But that is not the reality… we want to rise to higher positions from here,” she said.

This isn’t the first time that the corporation is renaming a station after a particular community or person. It had earlier named two stations - Sector 51 and Pari Chowk as Pink Stations on International Women’s Day. Connecting Noida to Greater Noida, these stations are women-friendly, with women staff and added facilities like baby feeding rooms, green rooms and sanitary pad vending machines.

In 2017, the Kochi Metro Rail Limited in Kerala took a similar step towards gender justice by employing 23 transgender persons in the metro station from Kudumbasree, a women’s self-help group. The world press praised the Kerala government for this ‘socially conscious’ initiative. The Kochi Metro currently aims at raising the number of transgender employees from 23 to 60.

Initiatives like these portray how our nation works towards the inclusion of every community and provides for equal representation in the most diverse society in the world.