Trump vs Biden: Who is your leader?

President Trump and his opponent Biden battle it out in the first US Presidential Debate of 2020.

Republican President Donald Trump and Democratic opponent Joe Biden clashed over Trump's leadership on Covid-19, the economy, taxes, systemic racism, protests, and climate change in the first out of three debates as the US heads towards presidential elections in November. Moderator Chris Wallace of Fox News tried to maintain maximum decorum while the two candidates often spoke over each other and exchanged insults in this much-awaited political debate.

Was Trump a good leader amid Covid-19?
Biden charged at Trump’s leadership on Covid-19 saying he failed to inform the people early about the virus. The President seemed to blame China and fake news for the rapid spread of Covid-19 and says he received praise from the Governor and people for his role in handling the virus. According to the President, he is doing a great job. He explained that he did not want to cause panic earlier when his opponent Biden said that it was Trump who panicked when he heard the news of the pandemic. He was also reluctant regarding the reopening of the economy and schools due to the absence of a concrete plan from the President. The Democratic candidate also said that the President has no plan to battle the virus and must “get out of his bunker,” strengthen funding, and save lives.

Moderator Wallace highlighted how campaigns have been held in the wake of a pandemic. While the Republicans resorted to large rallies with crowds packed together, the Democrats were more vigilant of the pandemic.
In response to the President's approach, Biden confidently remarked that the President of the US does not worry about the people.

The rich become richer, the poor become poorer?
Wallace asked the US President about his payment of taxes while revealing a report of The New York Times. The report stated that President Trump had paid $750 in federal income taxes in 2016 and 2017, but did not do so after. Trump was quick to interrupt and declined the report by saying, "I paid millions of dollars in taxes. Millions of dollars in income tax." Meanwhile, Biden shared his plans to eliminate a significant number of taxes and fix corporate tax at 28%. “We have 91 companies under Fortune500 who do not pay a single penny of tax, despite making billions of dollars,” he added.

Systemic racism and injustice
President Trump and Democratic candidate Biden disputed over who would be a better President to deal with racial issues in America. Biden described Trump as a President who wants to divide people instead of uniting them and “uses everything as a dog whistle to generate hatred and racist division.” Trump interrupted Biden to reveal total support from law and enforcement groups in Florida, Texas, and Portland. However, the Multnomah County Sheriff Mike Reese tweeted - "As the Multnomah County Sheriff, I have never supported Donald Trump and will never support him.”

Given the systemic racism in America, Wallace questioned President Trump’s actions of eliminating the racial sensitivity training program to which he responded that “I ended it because it was racist and people were complaining that they were asked to do things that were absolutely insane,” and called it a radical revolution. However, Biden disagreed and believed that people should be aware of what is demeaning to them.

During the debate, Wallace asked Trump if he was willing to condemn white supremacists and militia groups. "I would say almost everything I see is from the left-wing, not the right-wing," Trump replied. “I'm willing to do anything. I want to see peace,” he added as Wallace steered to the next segment. 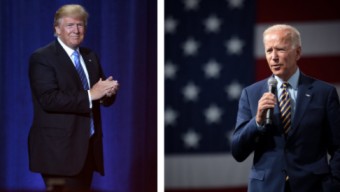 Addressing climate change
“I want crystal clear water and air. We have to do everything to have immaculate air and water and plant a billion trees,” said Trump about the science of climate change. He mentioned that human pollution contributes to global warming only to a certain extent and argued that Biden’s plan to end the use of fossil fuel to generate electricity by 2035 will tank down the economy and cost millions of jobs. While the Democratic candidate disagreed, he further explained the benefits of renewable energy, electric cars, and weatherized buildings to prevent the release of toxic gases. Along with new green infrastructure, he assured to bring the US back into The Paris Accord.

“Why should they vote for you?”
“Under Trump’s presidency, we will become weaker, sicker, poorer, more divided, and more violent,” said Biden while explaining how he, as a former Vice President, played an instrumental role in boosting the economy during a recession and united the people of America.

However, President Trump said that people should vote for him because “there is no President who has done more than what I have done.” He had also previously said during the debate that he has done more to the American people in 47 months than Joe Biden had in 47 years. He added that by the end of the first term if re-elected, there would be approximately 300 federal judges and 3 Supreme Court judges.

Will it be a fair election?
President Trump raised concerns over the use of mail-in ballots, saying there are high chances of the process getting manipulated. “As far as the ballot is concerned, it is a disaster. It is going to be a fraud,” he said.
When Wallace asked Trump whether he would urge his supporters to stay calm during an extended counting process due to mail-in ballots, he responded: "I am urging my supporters to go into the polls and watch very carefully because that is what needs to happen.”

Similarly, Biden urged people to vote in whatever way is best for them and assured people that Trump cannot stop anyone from determining the outcome of the election. The President said he will count on the Supreme Court for a fair process. The debate ended with President Trump’s warning - “This is not going to end well.”