"Too Much Congestion", Is The Flyover Situation!

A flyover is meant to regulate vehicular traffic but what happens when the traffic piles up on the very same flyover. A look into the traffic situation in Hebbal. 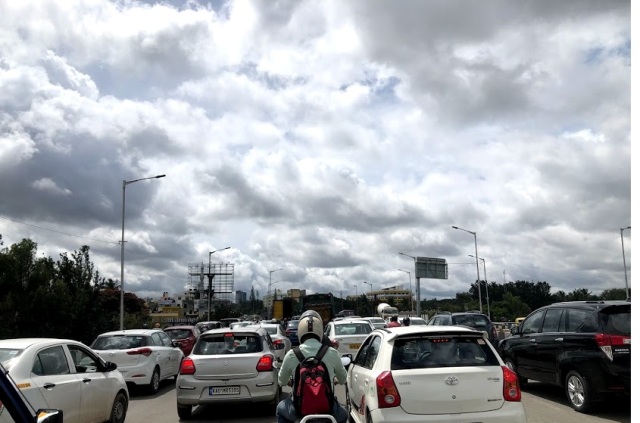 Vehicles move at a snail's pace on Hebbal flyover

By Roshini Muthukumar and Sneha Ramesh

Like climate change is real and growing, so is the traffic on Hebbal flyover. Commuters to and from the airport are greeted with turtle-paced traffic movement. This flyover was built in 2003 to streamline the movement of vehicles coming from 10 different lanes. But, there is a traffic jam at any time of the day as all these lanes ultimately feed into a two-lane section.

The flyover is a major intersection connecting the centre of the city to parts of the north Bangalore and vice versa. It reroutes vehicles moving to and from ITPL, Yelahanka, Bangalore city, and Tumkur road, but there is heavy influx throughout the day and the situation worsens during peak hours. "I cross the flyover 15 to 20 times every day. There is never a time during the day when the flyover is reasonably free. It has been this way for many years, I am just used to it," said auto driver Muni.

Hebbal was originally famous for the eponymous lake, and the flyover too was once considered the pride of Bangalore. Now, the area is better known for its traffic. Suhas, a software engineer who crosses the flyover to reach Manyata Tech Park every day, said: "As a biker, I can get through any traffic easily. But, on Hebbal flyover there is just no space to navigate through."

Traffic police also agree that there is a problem. "There are vehicles coming in from 10 different lanes onto two small lanes. It is obvious that there is going to be congestion. Police officers are deputed to regulate traffic, but unfortunately, the situation remains the same, every day. The problem lies somewhere else," said Sarah Fathima, Deputy Commissioner of Police (Traffic), RT Nagar. After the flyover was built, pedestrians were only able to cross where the flyovers ended. Following fatal accidents, the government installed a subway on one side and a skywalk on the other.

Student Journalists from NSoJ took a ride over the Hebbal flyover at 10:30 am and observed that the traffic started piling up at the centre as the lanes converged. It was not standstill traffic but very slow-moving. Though the police make efforts to regulate the traffic on the flyover, lack of planning on the part of the government and the architects concerned, has led to an everyday gridlock situation. With no relief in sight for commuters, how are officials going to tackle this?