To count or not?

The BJP fears sparking a Mandal 2.0 but the scope for the BJP to beat regional parties at this isn’t absent either. 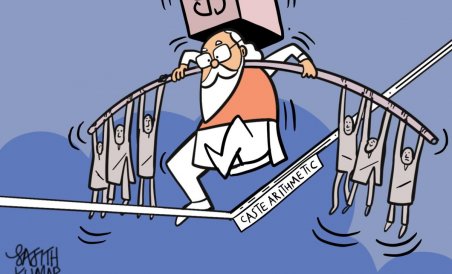 The demand for a caste census has found greater support after the passage of the 127A Amendment Bill, 2021, which has reinstated the power of states to identify Other Backward Classes (OBCs) that are socially and economically backward.

The last caste census was held in 1931 during the British raj. The census, conducted every ten years, in independent India has enumerated religion, language, and socio-economic condition of the population. It also counts the population of Scheduled Castes (SCs) and Scheduled Tribes (STs) separately and excludes people from the OBC community. The OBCs continue to be clubbed with the General category in the census data.

The grouping ‘OBCs’ though has never featured in the census tally, continues to be a crucial data point for granting various welfare schemes and reservations.

The main argument behind demands for a caste census is to get the exact numbers of the OBC population in the country vis-à-vis their socio-economic status since targeted policy-making and their success hinges upon accurate data. The 1931 census had pegged the OBC population at 52%. The all-important Mandal Commission of 1980 too estimated the same while recommending quotas for the community.

Cap, constitutionality and judgements on quotas

Until 2019, reservations were awarded to three main social groups- SCs (15%), STs (7.5%), and OBCs (27%)- which totalled to 49.5%. However, in the run-up to the 2019 general elections, the union government introduced a 10% quota for Economically Weaker Sections (EWS) and stretched the judicially-mandated cap to almost 60%.

The EWS quota, though operationalised, remains challenged at the Supreme court.

However, if the historic Indira Sawhney ruling of 1992 is anything to go by, reservations must not exceed the cap of 50%. “Since this Court has consistently held that the reservations under Article 15(4) and 16(4) should not exceed 50% and the states and the Union have by and large accepted this as correct it should be held as constitutional prohibition and any reservation beyond 50% would liable to be struck down”, read the judgement.

Referring to this judgement, in May 2021, a five-judge bench of the apex court struck down the Maratha quota in the state of Maharashtra.

However, a part of both the judgements offers great hope for the BJP over the EWS quota. In 1992 it held that reservations must be “exercised in a fair manner and within reasonable limits”. On a similar line, while reading down the Maratha reservation it reasoned that there were “no extraordinary circumstances for exceeding the ceiling”. The EWS quota being uniquely new hasn’t been stayed yet.

In July 2021, Minister of State (MoS) for Home Affairs, Nityanand Rai, informed the Lok Sabha that, “the Government of India has decided as a matter of policy not to enumerate caste-wise population other than SCs and STs in the census”, thus putting to rest any sort of speculations over it.

The BJP apprehends a caste census would ultimately lead to demands of increasing the existing quotas since the percentage of the OBC population in all likelihood is likely to be higher than what was enumerated in 1931, almost a century ago, at 52%.

Reaping the fruits of the Hindutva narrative, the BJP is extremely cautious of rejuvenating caste tussles and sparking a Mandal 2.0.

The party has largely been able to shade its Brahmin-Bania-party tag after successfully including non-dominant backward classes and Dalits in its electoral fold. It is wary of ‘disturbing the balance’ it has been able to achieve on the caste front as it pursues the larger goal of saffronisation.

Should the BJP really worry?

A caste census is likely to throw up findings showing a strong grip of the affluent castes over resources and opportunities. Any such findings, as mentioned above, is likely to be followed up with a chorus to rationalise opportunities and redistribute resources i.e, the call for ensuring equity as a socialist state.

With the upper caste voter base being the core vote bank for the Bharatiya Janata Party, it cannot be a comfortable choice to make.

However, that’s not the end of it. Such an exercise would also unveil a long-recognised phenomenon that the advantage of reservations was grabbed largely by the dominant among the backwards or what the apex court calls the ‘creamy layer'.

The Yadavs, the Jats, the Marathas, the Kunbis, the Reddys, and the Vokkaligas in their respective states are a powerful political constituency and are expected to have leveraged the quota the most. If conducted, such a census will put parties like the SP, RJD, NCP, RLD etc in a spot.

Parties like SP and RJD- the two strongest products of socialist politics in the country- have seen their support base hollow out in the last decade and the phenomenon continues.

These parties have been reduced to representing certain social sections owing to their alleged casteist politics, and the disenchanted sections have gradually migrated towards the saffron party. The recently concluded Uttar Pradesh election is a befitting example of the change.

The Brahamastra of ‘Rohini Commission’

In October of 2017, a commission headed by Justice (retd.) G. Rohini was appointed to examine the sub-categorisation of OBCs to ‘ensure that more backward among OBCs can also access the benefits of reservations for educational institutions and government jobs’. The commission aims to inquire and suggest steps to subdivide the 27% reservations for OBCs in the central list.

Sub-categorisation of OBCs, a legal-administrative nomenclature, is to rectify the long-standing error of clubbing the most backward with the ‘elites’ among the backward which resulted in disproportionate distribution of opportunities.

Dominant OBCs who are not only the core support base of many of these parties but also the immediate land-owning and bullying caste for the ‘deprived castes’ are likely to lose out following the implementation of the suggestions by the commission, which are yet to be made public.

Waiting for the opportune moment, the BJP-led NDA government has so far deferred the release of the report. To date, the commission has been granted a whopping twelve extensions. However, the delay may finally see an end after the census of 2022.

The BJP, which has mastered the politics of welfare and made significant inroads among the socially and economically disadvantaged voting bloc, may use this ‘Brahmastra’ to nullify or, at least, tame down any future demands around reservations- a roadblock for its larger project.

The Supreme court’s view (Indira Sawhney vs Union of India, 1992) on creamy layer among OBCs (‘as forward as any forward class member’), and its repeated insistence on a 50% cap on quota and the Rohini Commission- are the three effective ammunition in the BJP’s arsenal to tackle any quota-eyed politics. Therefore, the party must not be held back to the extent where it loses in the perception battle. If stretched, the BJP should go for it.

(Post-Script: On June 1, the Bihar Chief Minister announced a ‘caste-based count’ of its population after reaching a consensus among all the parties in the state. This also included the BJP. The state BJP unit has consistently maintained a different stand from its national wing on the issue.)