Through the eyes of a reporter

Mr Rajesh Ramachandran, editor of The Tribune, spoke about a reporter’s responsibilities, media ethics and recounted his experiences of reporting, from the parliament to the battlefields of Kargil. 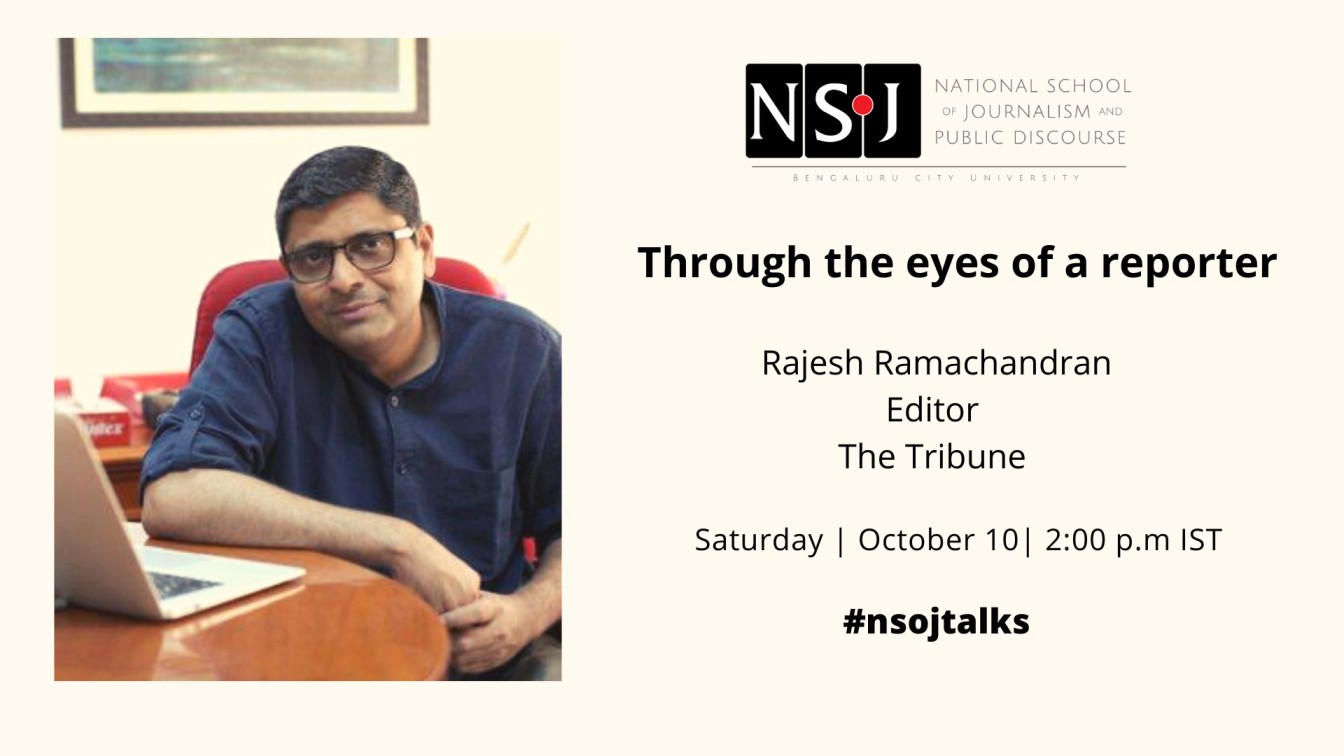 “The essential quality of journalism is truthful reporting,” said Mr Rajesh Ramachandran, speaking in the 7th session of the NSoJ Virtual Talks series held on October 10, 2020.

Mr Ramachandran began by stating what he considered a journalist’s primary responsibilities to be: to report, to tell, to inform, and to reflect what is happening around us. Recounting the start of his journey, he laid out the primary qualities of a reporter he has observed through the years, the first of which was curiosity. A reporter must be curious and interested in life around himself, he said. The second quality is a commitment - having an element of commitment towards getting things corrected, to make a change.
“I see journalism as a social audit - where we look at the imperfections, the inequities, the intolerance and the injustice.. where things have gone wrong, and (where and how they could be fixed.”

Understanding that many things around us are wrong but that most of them can be set right is an attitude crucial to start a fruitful journey, he said. Regardless of what the issue to be covered is - national politics or a local happening - every aspect of life is to be understood as equal in importance. “The passion ought to be the same,” he added.

For a reporter, the news is, by itself, raw material. Highlighting the effort put into curating news for a newspaper, his one suggestion to young, budding journalists was to, every day, pick up the best raw material for curiosity: the morning newspaper. The curiosity to dig deeper will come from there, the commitment to find the truth will arise. “Without news, you have nothing.”

He noted how, in his conversations with young journalism enthusiasts, he has observed that they believed social media and talk shows to be enough sources of news, but he disagreed. It is important to understand the difference between news and someone’s opinion peddled as news. “News ought to be just news reports,” he said.

A reporter’s politics
Mr Ramachandran stated that everyone is political and that one is bound to take a stand if he/she tries to understand the world. An element of conditioning exists, which provides one a certain political platform to start from. While that is okay, he said: “this politics should not blur your vision, it should make it clearer.” Talking about a situation where a contradiction between the oppressed and an oppressor exists, he said that if a reporter gravitates towards the common man, his politics will never blur him.

He briefly touched upon the aspects of fake news and sting journalism, highlighting the importance of training for a reporter to spot fake news and know what to include in a report. Carrying spy cams and recording wrongdoing was considered fashionable in the past, but sting journalism, in most cases, involves luring people to commit wrongdoing and then claim to expose it, he said. Mr Ramachandran then moved to the subject of media ethics, saying that the tools and platforms in journalism need to be wielded with caution, responsibility and commitment to make our society a better place.

Responding to questions, Mr Ramachandran laid stress on a reporter’s role during the disruption of the status quo as always understanding a situation and being prepared to gather as much information as possible to report about it. He advised the viewers to not consider a hierarchy, specifying that if one is a good journalist [first], then he/she will become a good journalist in any specialization - be it defence journalism or foreign affairs or politics.

He recalled the difficulties experienced in sending reports to the desk due to issues of accessibility during the Kargil war. While covering conflict situations, it is important to look at the lack of justice and report wrongdoing, he said. He also addressed questions regarding India’s falling ranking on the Press Freedom Index and expressed his disappointment with media trials, calling it “the saddest thing that has happened to journalism.”