The Unspoken Story of Wildlife 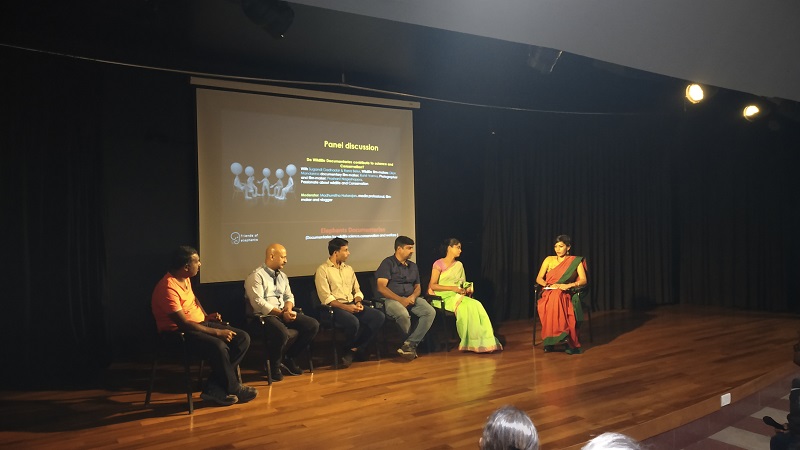 Documentary filmmakers in a discussion about wildlife

By Hita Prakash and Nishi Trivedi

Bangalore: “In this blazing heat all I can think about is a nap. That is if these monkeys stop peeping in!”

Who’s speaking, you may well ask?

That’s Bindu, an Indian sloth bear whose habitat is Hospet in Central Karnataka. Bindu talks about her life, her cubs and surroundings, in the documentary ‘Daroji’ by Sugandhi Gadadhar and Rana Belur. The duo are certified naturalists and wildlife filmmakers whose work was screened at Rangasthala, Rangoli Metro Art Centre on Mahatma Gandhi Road, recently. Other wildlife documentaries shown at the event included Elephant Family by BBC Two, The Giant Odyssey by Prashanth Nageshappa, Gaja by Yedukondalu IFS, and Men of the Mist by Kudremukh Wildlife Division.

The Friends of Elephants, in collaboration with the Wildlife Trust of India, presented “Elephant Documentaries” which highlighted wildlife science, conservation, and animal welfare. The aim of the event was to highlight the need for man and animal to co-exist. Of course, Bindu the sloth bear did not actually speak. The voiceover was meant to give audiences the feeling of directly interacting with the bear and more importantly, understand her world. The majority of the urban people are unaware of the problems faced by wildlife and human beings, who live in close proximity for survival. In recent times, the number of elephants and tigers has increased whereas the total land area of forests is considerably decreasing owing to reasons such as encroachment for agriculture and acquisition for development and railways, etc. Finding food becomes difficult for these gentle giants as well as predators, forcing them to often venture into human settlements causing great harm to crops and domestic animals. Some movies also emphasised the work done by forest officials in difficult terrain and their fight against poaching, timber mafia, and wild animals attacking villagers. Another issue in focus was poaching and the methods used by hunters to kill wild animals.

“Do wildlife documentaries contribute to science and conservation?” was the theme for the panel discussion consisting of the filmmakers whose works were featured during the event. The discussion started with the panellist being asked about how they managed to fund their projects? “We spend our own money to produce these movies because of the passion we have for the subject,” said Rana Belur. Adding to it Rohit Varma, a nature and wildlife photographer said, “Unless you build awareness surrounding your subject, it is difficult to get funding.” Speaking about the impact their work can create, Prashanth Nageshappa, a senior technical leader and an avid nature lover said, “Making documentaries in local languages is more useful as it helps in reaching the rural audience. They are the ones living on the fringes of the forest and therefore, the ground workers, unlike the city audience.”

There are difficulties in filming such stories as reaching the wildlife involves a large pile of paperwork and rounds to government offices to get permissions. But the panellists believe that with time the officials are opening to the idea of documentation and are also willing to share the challenges they themselves face. The forest department has also started awareness programmes such as “Chinnara Vana Darshana”, for rural school children, including forest walks to educate them on the importance of conservation. Most schools located near and around forest areas, also have environmental clubs added to their curriculum.

For a balanced ecosystem to thrive, the protection and survival of wildlife is vital. But for most urban audiences, forests are synonymous with recreational activities -- a stay at a wildlife resort, a trek or a hike and so on. Whereas, conservation and conflict are a reality for those who live in areas that fringe the forests and such documentaries play a crucial role to help bridge the urban-rural divide.