The role of mind perception: the fundamental navigation tool of human social lives

Understanding Bhuta Kola: A Psychological Analysis of Perception and the Perspectives of People 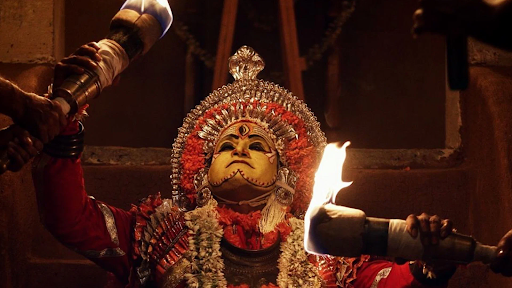 The opulence of the folklore Bhuta Kola Credits: a screenshot from the film Kantara

"Nambidinayan kai budaye Nambandinayan nambave" (I shall not leave the hands of those who believe in me and cause the non-believers to fold their hands before me) is an adage attributed to the Tulunadu. Fear, ironically, led to the emergence of spirit worship. Man dreaded wild boars because they damaged his crops and threatened his life, just as tigers and snakes did. As a result, man started praying to the spirits of tigers (Pilichandi) and wild boars (Panjurli) in order to obtain protection for his crops and life. Native Tulu speakers, known as Tuluvas, have a deeply ingrained belief in the ability of spirits to impact life. The tradition of spirit worship is still prevalent despite the expansion of the scientific mentality. This raises a crucial question: Is mind perception the cognitive basis of beliefs in gods?

The fury of nature was dreaded by early humanity. Therefore, they revered nature in order to prevent any harm. In Tulu, Kola means a play or performance, and Bhuta means spirit. This ritual, also known as "Bhuta Kola" or "Nema", is distinguished by a narrative that extols the virtues and acts of the spirits in order to entice the spirit to possess the impersonator, who dances all night long to rhythmic hypnotic drum beats. Through a special blending of colours, costumes, story-telling, dancing, and music, the Bhoota Kola ritual offers a wonderful look into the world of spirits. The performer is thought to be possessed by a spirit and serves as a conduit for communication between God and the worshippers.

Kolas are customary ceremonies that blend festivity with an effort to maintain equilibrium. According to earlier stories, the daiva served as a mediator, listening to the complaint, and offering a way for the guilty to confess his or her sins. Communities that were historically marginalised relied on this method of redress.

Bhuta Kola: the key to equality

People believe that God does not appear directly in front of anyone. In the case of spirits, one can converse, share difficulties, and receive immediate guidance or admonition because an impersonator is viewed similarly to a spirit during possession. In addition, the entire caste system is turned upside down during the rite of Bhuta Kola, requiring high-caste landowners to bow down to a low-caste mimic even while the spirit addresses them in the singular. Thus, promoting social equality. Given that even Muslims worship Hindu spirits and vice versa, spirit worship even fosters intercommunal cooperation in the region. The spirits themselves originate from all castes and socioeconomic groups. Since ancient times, music, dance, and theatre have had a narrative, structural, and teleological purposes based on timeless mythology and allusions to religious routes leading to ultimate spiritual goals. In India, however, it is a different and more complicated thing to view religion as a performance art.

A mob's perception of the demigod Dalits who resisted hierarchy and accomplished remarkable exploits frequently became daivas, particularly if they passed away suddenly. Their myths include the heroes "vanishing", which is commonly understood to mean that they perished. But Bhuta Kola and oral epics ensure that these heroes are never forgotten and that their memory is preserved. They act as a reminder of the daiva's brilliance and bravery throughout their lifetimes, as well as the injustice they encountered when they were killed and made to disappear while still mortals. When their lives are recounted via song, these absent presences are brought back to life through the Kola, and the ceremonial performance of possession permits these symbols to briefly reappear in their community. 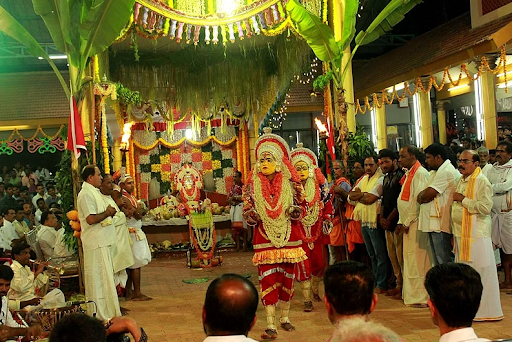 Invoking Sigmund Freud's theory that religion is pathological and involves a negative social force that encourages illogical thinking and ritualistic behaviours. On the contrary, the Bhuta Kola event is cherished as one that significantly contributes to bringing people together and creating new bonds within the community. Returning to the question, what constitutes the cognitive basis of beliefs in these demigods?

The cognitive underpinnings of religious belief

Mind perception is the fundamental tool for navigating human social life. It enables people to anticipate other people's behaviour, which is essential for collaboration and coordination in social organisations. The core of all religions is the idea of sentient supernatural beings.

These beings may possess distinctive traits like omnipotence or flight, but despite this astonishing diversity, they all have one important thing in common. In all cultures, supernatural beings are characterised and portrayed as having minds, as having ideas and wants, and as beings who people can connect with in order to overcome their existential anxieties. In other words, mind perception could be the cognitive underpinning of belief in gods. A variety of more specific theories become clearer when religious beliefs are seen through the lens of mental perception.

A view through the lens of mental perception

Supernatural minds are at least implicitly portrayed as basically human, and the same biases that affect how people reason about each other's minds also form people's perceptions of gods. The content of religious beliefs are strongly influenced by mental perception processes. Studies show that people's representations of supernatural beings are constrained by their understanding of the mind, which gives rise to at least implicitly anthropomorphic ideas about the minds of deities. Understanding mind perception is a fascinating framework for studying many different aspects of religious cognition.

Psychologist Justin Barrett, the former director of the Cognition, Religion and Theology Project at Oxford University, says that "There's no one cognitive tendency that undergirds all our religious beliefs." "It’s really your basic, garden-variety cognitions that provide the impetus for religious beliefs," Studies by Grafman, the former head of the cognitive neuroscience division at the National Institute of Neurological Disorders and Stroke, have shown that religious thoughts activate the region of the brain associated with the theory of mind, the capacity to understand the emotions and intentions of others.

Struggles faced and the growing immortality

While Bhuta Kola struggles to survive in the real world, having a film adaptation like Kantara gives the ritual a new sense of immortality.This folklore has always had a positive view, but it wasn't well known to the rest of the country until Kantara popularised it, and it is now perceived with wonder by most people. Now that more people are conscious of culture and history, the Bhuta Kola tradition has a distinct reputation. In that regard, we may conclude that understanding Bhuta Kola and any religion is significantly influenced by the herd's perception of the mind, faith, and god.