The Right Lens To View The Modi Era?

Changes are more than obvious. For good or bad is the question. 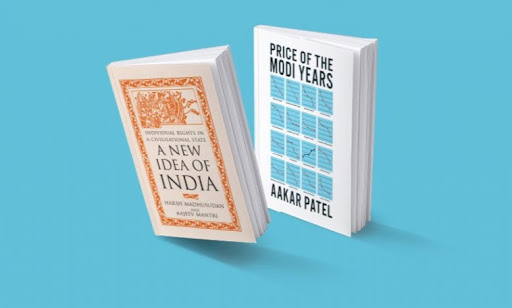 "Narendra Modi’s election win heralds new era in India," wrote the Wall Street Journal after Narendra Modi swept to power in 2014. Seven years down the line, with him serving a consecutive term, changes are seen. However, whether those changes are heralding an improved Indian outlook is a contested question.

Two recently launched books, A New Idea of India by Harsh Madhusudhan and Rajeev Mantri and Price of the Modi Years by Aakar Patel throw starkly different points of view. In a meaningful conversation organised by the Bangalore International Centre, the authors put forward arguments in support of their line of writing.

Dull economic scene?
The decline of the Indian economy in recent years is hardly disputed, though the government rebuts by claiming strong fundamentals of the economy in addition to certain reforms.

Aakar Patel, speaking about the price India is paying for the Modi years, defended his case by listing out several economic indices which, as per his opinion, denotes a total failure on the economic front, including -

•Five crore fewer Indians working today than in 2013
•People's food and other expenditure in 2018 was lower than in 2012
•Labour force participation rate has shrunk to 40%
•Manufacturing sector's share in GDP fell to 13% from 16% despite the 'Make in India' campaign, while Bangladesh and Vietnam saw a rise
•More people are flocking back to the agricultural sector owing to a decline in manufacturing jobs
•Automobile sales flattened in the last few years
•23 crore Indians fell below the poverty line last year (acc. to findings of the Azim Premji University)
•80 crore people queuing up for free ration

Faced by the factual onslaught, author Harsh Madhusudan, who called himself a BJP supporter, also countered by claiming that Aakar relied on cherry-picked data." One must check the data for preceding years and look for trends, if any, and avoid getting misled," retorted Madhusudan.

According to him, there are certain economic trends that need attention, but to attribute any such unimpressive outcomes to the Modi government only is unfair.

Madhusudan took the rebuttal to highlight that the last-mile reach of welfare schemes has witnessed drastic improvement and that leakages have been filled.

Anti-minority discourse?
While agreeing with the other two authors over the change that India is going through, Patel aimed to suggest that these departures from the previous era were dragging India into the same bracket as that of its South Asian neighbours.

Aakar mentioned a slew of laws on the lines of “love jihad” and strengthening of anti-cow slaughter acts being used as a tool to harass minorities.

"In 15 states there are no Muslim ministers, others, where there are one, are mostly heading minority affairs. The ruling party does not even have a single Muslim MP in the Lok Sabha where it has a mammoth majority," argued Aakar.

Mr Aakar reminded them of increasing acts of vigilantism, at times violent, against churches and the Christian community at large in states like Karnataka and Madhya Pradesh.

To the question of Rajeev Mantri on whether a Muslim was essential to represent Muslims and wouldn't that idea be on the same page as that of Jinnah, Patel emphasised the need for representation in leadership and said that it was the adamant position taken by the Indian National Congress (INC) over not decentralising power to accommodate demands that led to the partition.

Correcting historical wrongs?
The authors of 'A New Idea of India' opened up their arguments by stressing that the annulment of Article 370 in Kashmir and the banning of Triple Talaq, were long-pending issues that had been resolved.

Madhusudan and Mantri batted for a Uniform Civil Code in the course of their speech over different rules for personal laws for people of different religions.

Countering Aakar over his objection to the criminalisation of Triple-Talaq, Madhusudan hinted at the hypocrisy of left-liberals over not advocating for similar laws governing the personal lives of everyone. "Soft-bigotry of low expectation", termed Madhusudan.

"Nehruvian era philosophy didn't extend rights to individuals but to groups, and not uniformly", summed up Mantri.

On the economic front too, Rajeev Mantri argued, India has been, for the last 25 years, on a different economic trajectory that is free of the clutches of license-permit raj days. "Especially the Vajpayee years, and now post-2014 economic reforms unleashed shall prove to be path-breaking in due course," said Mantri.

A New Idea of India?
Could economic prosperity dilute, if not eradicate, caste and its collateral effects in Indian society? If Harsh Madhusudan is to be believed, this process is already on.

"Dissolution of caste boundaries owing to the rise of the new Hindu middle class and the resultant meeting of modernity with tradition is the primary reason behind the rise of Hindutva", remarked Madhusudan.

He also slammed the left-liberal intelligentsia for their inhibition to acknowledge the real civilisational history, which, according to him, is 5000 years old, due to their apprehension of being seen to be legitimising Hindutva.

Pointing that the real civilisational history of India was getting recognised now, Mantri asserted that India isn't just a post-colonial state but a civilisational entity. India wasn't created in 1947 by the British raj or anyone. "The Indian nation long precedes the Indian republic. The Republic’s creation was just a milestone in its journey," proclaimed Mantri.