The Ravindran Story - Innovator since 17

“One cannot make the same mistake again and again. Make new mistakes but never repeat the same ones.” 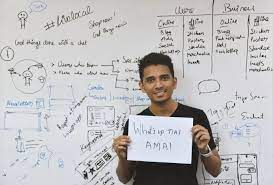 Deepak Ravindran, a Kerala-born entrepreneur, is the mastermind behind an innovative application called Lookup. Lookup is a messaging app that guarantees privacy. It fundamentally targets to connect consumers with local shop owners.

Lookup is Ravindran’s third attempt at creating a mobile application company. Innoz and Quest were the earlier projects.

As a young entrepreneur, Ravindran has won multiple awards at national and international levels. He has been described as the ‘Mark Zuckerberg of India’ by Business Insider.

At the age of 27, Ravindran introduced this app - a hyperlocal messaging platform that allows customers to connect with local businesses. In an interview with the Economic Times, he talked about his inspiration. “I saw my mother chatting with her grocer over WhatsApp and placing her order. That was an eye-opener, about the way people use chats.” In the same interview, he also addressed the issue of privacy.

On Whatsapp, an individual is more vulnerable as they are supposed to save the number, and their personal information is out in the open for everyone to see, including one’s display picture. Deepak ensured absolute privacy of his platform in the 2015 interview.

With three start-ups in his baggage already, Ravindran talks about the importance of committing mistakes. “One cannot make the same mistake again and again. Make new mistakes but never repeat the same ones,” he said in another interview with the Economic Times.

Chapter - 1
In the year 2005, at the early age of 17, Ravindran came out with his first start-up, Innoz. The SMS-based application was profitable for most of its time in the market. However, with the emergence of the Internet and smartphones, the demand for such services got impacted. The company ceased to provide services while it was still making a profit.

Ravindran is passionate about creating something that lasts. Besides, he also agreed to the fact that as a new player, there is a certain advantage. He hinted at having slight freedom, as not many big players are looking out for you or keeping a watch on your next moves.

Chapter - 2
Post Innoz, Deepak landed in the Massachusetts Institute of Technology as a part of an incubator program. There, he came up with an online question and answers platform called Quest.

While talking to the Economic Times, Ravindran said, “My co-founders and I put in some $100,000 and raised around $50,000 from the investors. We burnt it in less than a year”. The Quest prospect did not work out as he had wanted. However, Deepak saw a stark difference in how people treat failure in India as against the US.

“If you design a product and it doesn’t work out, people in the US are willing to accept and move on.” said the now 34-year-old entrepreneur.

Ravindran accredited this episode of failure as a great learning curve. He stated the importance of having a broader view regarding the market. According to Deepak, it is vital to see beyond India to find “great products and great founders”. 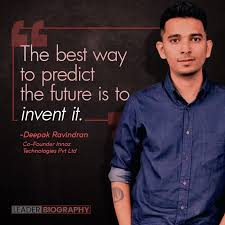 Chapter 3
After the loss at Quest, many people advised Ravindran to join a company. However, he had some other plans. While talking about the reception of his previous projects, he said that people celebrate success; however, no one shows interest in knowing what goes wrong after that. This time, Deepak cashed in the need of the people while launching his hyperlocal messaging application, Lookup. He also stressed the need to be aware of when to stop and change the plan. “Otherwise you get hit”.