The One Where They All Got Back Together

17 years since they closed the purple door behind them and walked away to get coffee, the six friends take a trip through nostalgia in this one-off reunion special. 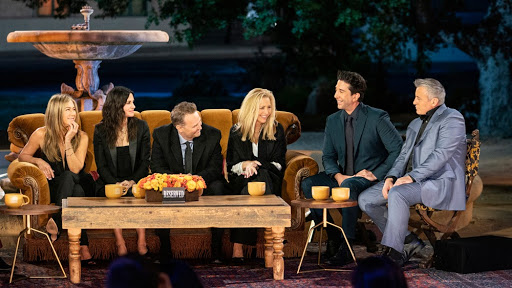 It finally happened. Ever since the finale aired in 2004, fans of the iconic show ‘Friends’ have been begging the team behind it to bring the characters back for one last season or a movie. The cast visibly denied all rumours of a reunion whenever they were asked, citing that the show ended so beautifully that they wouldn’t want to ruin its legacy. But all that changed this year.

Hosted by British TV personality James Corden, the Friends reunion was a 90-minute show which saw the six friends get together for only the second time since the show ended, as they revisited the old sets, did table reads and recreated some of their iconic scenes, and sat down with Corden for a candid interview. Many people were disappointed to find out that the reunion wasn’t a continuation of the story, hoping to see the cast appear as their screen selves instead of their real selves. But even then, it made for an entertaining and emotional 90 minutes as the cast shared some never before known incidents and took us down the memory lane.

The episode opens up with David Schwimmer walking into the recreated set of Monica’s apartment, followed by Lisa Kudrow, Jennifer Aniston, Matt LeBlanc, Courteney Cox and Matthew Perry entering the room. Within the opening five minutes there are tears in some of their eyes already as you can see the actors were unprepared for this. It’s not just them, but the fans feel the same way too.

Though apart from each other on-screen for 17 years, they gel so well together that it doesn’t feel like much time has passed since the finale aired. Most of the cast really just play glorified versions of themselves in the show, so seeing them all together at once doesn’t feel like you’re watching Matthew Perry and Lisa Kudrow, but Chandler and Phoebe instead. 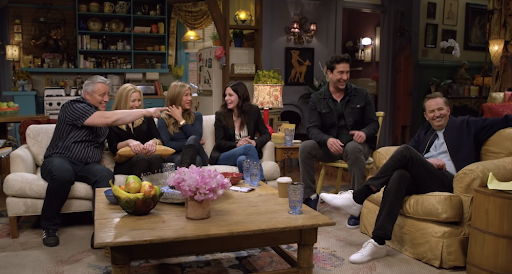 The show follows an interesting format, switching back and forth from the main interview with James Corden to the cast walking around the set, playing games and just having conversations with each other. There are in-depth interviews with the show’s creators, who explain the casting and audition processes and recall how difficult it was to sign some of the cast due to other commitments.

Just like how the original show had great cameos from time to time, there is no shortage of cameos in this 90-minute special. Tom Selleck (Richard), Larry Hankin (Mr. Heckles), James Michael Tyler (Gunther) and Maggie Wheeler (Janice) all appear in the reunion, with some of them reprising their characters at times. The reunion also had some famous people from around the world sharing their experience watching the series and how watching Friends changed their lives, most notably David Beckham, the boy band BTS, Kit Harington and Malala Yousafzai.

It’s All Fun and Games 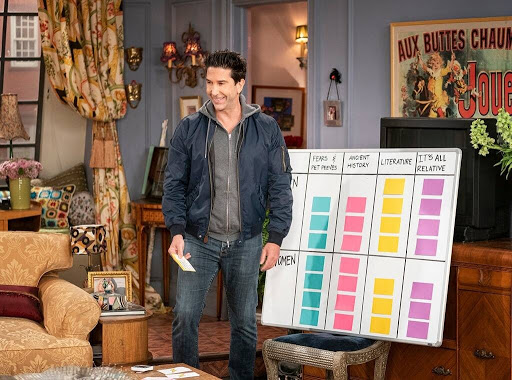 The reunion was made more energetic with the iconic Quiz - featured in the episode ‘The One With the Embryos’ when Monica and Rachel lose their apartment. It faithfully recreates the original episode, with the cast sitting in Monica’s apartment and Schwimmer still being the energetic quizmaster with questions that not only test the five of them but the viewers as well. The cast, still being their goofy self, mess up Chandler’s profession - AGAIN! To which Courteney remarks to Jennifer, “That is how we lost our apartment”.

Back at the fountain, James Corden announces a fashion show, where celebrities like Justin Bieber, Cara Delevingne and Cindy Crawford all walked down the ramp, showing off some of the iconic costumes that were used in Friends. The last model stood out, as Matt LeBlanc recreated his (or rather, all of Chandler’s) outfit that he wore during “The One Where No One’s Ready”. Seriously, could he BE wearing any more clothes?

The Big Revelation
“Is it blowing anyone else’s mind?” shouted James Corden to the audience when David Schwimmer and Jennifer Aniston publicly confessed that they had real feelings for each other during the earlier stages of the show. Our Roschel hearts just melted. Sadly, they said, they could never make things work because one of them was always in a relationship with someone else and so they used Ross and Rachel’s love story as a substitute for their real feelings. How sweet is that? They even did a table read recreation of the scene when they had their first kiss, and it’s unreal to see that those two still have that spark between them that made Ross and Rachel our favourite couple. 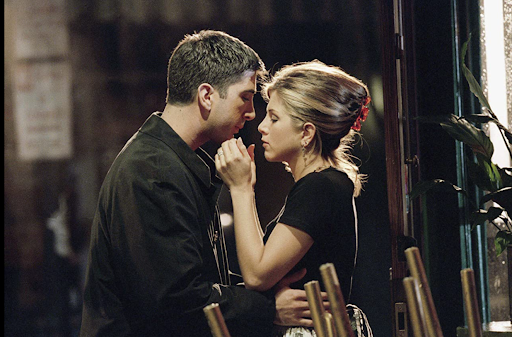 It’s all over...
With this long-awaited reunion now out of the way, it’s safe to assume this is the last time we have seen our friends together, publicly talking about the show. When asked about a Friends movie, Lisa Kudrow immediately shut down James Corden by saying that the show ended on a very sweet note, and to bring it back and stretch the story would mean unravelling all those good stories. They remarked how this is the last time they’ll ever be together like this, as they don’t expect to do another unscripted reunion 10-15 years from now. It is a bittersweet feeling but it is time we let these characters go.

They have entertained us since that fateful day in 1994 when Rachel barged into Central Perk in her wedding dress, and now it’s finally time to say goodbye. Especially the newer generation of fans, who never got to say goodbye to Friends when the finale aired in 2004. Friends: The Reunion is essentially farewell to six of our best friends whom we have unconditionally loved with all our heart for each of the previous 236 episodes. We should really stop holding out our hopeless beliefs that one day we will have friends like these for our own because what these six friends have in real life for the past 28 years, it’s hard to come across and they are extremely lucky to have each other. But that will not stop us from imagining scenarios where we were hanging out with them. Because deep down, we will always be the 7th friend.