The Media, Citizenship, and Identities

A panel discussion about the Citizenship Amendment Act, and its various implications on individual and communal identities. 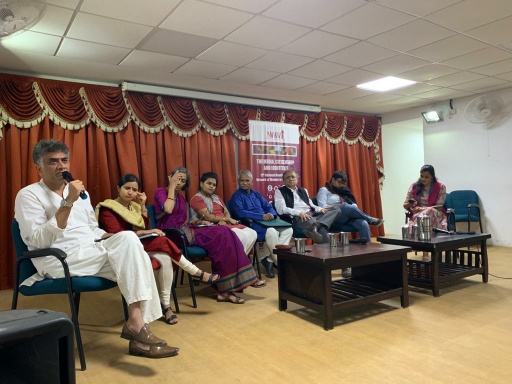 “I have never seen anything like this. I am amazed to see no politicians from the opposition party at protests,” said novelist and Padma Shri awardee, Shashi Deshpande, about the incident at Delhi’s Jamia Millia Islamia University at a panel discussion on ‘The Media, Citizenship, and Identities’ at the Institution of Agricultural Technologists, Bangalore.

Organised as part of the Network of Women in Media, India’s 15th national meeting, the panel brought together India's best minds for the discussion, which focused on the Citizen Amendment Act and its implications.

Present at the event were eminent women journalists, activists, and writers from all over the country. The panel comprised experts from various fields, including historian Ramchandra Guha, professor Malini Bhattacharjee, columnist Aakar Patel, filmmaker Madhu Bhushan, amongst others.

Flagging the CAA as an issue of time, Ms Deshpande linked the Act to the Partition of 1947. Expressing her concern over issues such as the police invasion in the library of Jamia Millia Islamia University, she said: Talking about the protest at Shaheen Bagh, she feels India's future is “glorious, as people of all age groups have been participating to save their fundamental rights.”

“Do only Muslim states persecute their citizens?” said historian Ramchandra Guha. The Gandhian scholar shed light on issues such as the abrogation of Article 370 in the State of Jammu and Kashmir, as well as the police invasion in the Jamia library. “[The Indian Government] wants to harass everyone who is against it,” he said.

Columnist Aakar Patel offered insights about the ground realities in Assam. “Many people were sent to Foreigners Tribunals after being excluded from the National Register of Citizens. Due to minor spelling errors, the government declared some people non-citizens," he said.

Professor at the Azim Premji University, Malini Bhattacharjee, was the only speaker in favour of the law. Talking about the persecution of Hindus in other countries, she said Indian Muslims will remain unaffected by the CAA and that the Indian variant of Islam is ‘different’. “The environment formed after the abrogation of Article 370, as well as the Ayodhya verdict has made Indian Muslims feel insecure.”

Filmmaker Madhu Bhushan shed light on the feminist perspective on gender and citizenship, and the vulnerabilities of nomadic communities. “What about the people who have no access to documentation or have no concept of documentation?” she said as she gave an example of a community that names newborn children according to their place of birth.

Professor Vijeta Kumar presented different perspectives on casteism and how it operates within the parameters of citizenship, while Teresa Braggs, a communications student at Mount Carmel College, spoke about student movements in the city. Sharing her experiences, she said the protests were a direct response to the Jamia incident. “These are student protests--we refuse any political support or interference.”