The 'kang Posh' of Kashmir

Captivating landscapes, aesthetic mountain ranges, mirror-like flowing streams, abundance of soothing vegetation, therapeutic buds and blossoms; are some of the thoughts and imaginations that run through one's mind when talking about the most exquisite place on the earth- Kashmir. 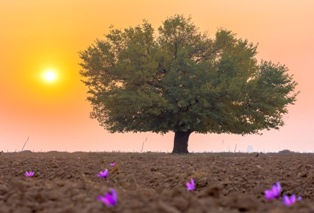 Kashmir is known worldwide for its uniquely enormous range and quality of fruits, condiments, handicrafts and much more. Some among them are found in some other places as well, but what makes kashmir stand out is the delectably different quality of the product. The saffron of kashmir being one such exclusive endowment.

Saffron is grown and produced in some other parts of the world as well, Spain and Iran being some of the gigantic producers. However, the saffron that is produced in Kashmir is unique to the place and is of a supreme quality over the other types. Owing to the supreme quality of Kashmiri saffron, it was lately granted the geographical indication (GI) under the Geographical Indications of Goods (Registration and Protection) Act of 1999.

According to the World Intellectual Property Organisation (WIPO),"A geographical indication (GI) is a sign used on products that have a specific geographical origin and possess qualities or a reputation that are due to that origin. In order to function as a GI, a sign must identify a product as originating in a given place. In addition, the qualities, characteristics or reputation of the product should be essentially due to the place of origin. Since the qualities depend on the geographical place of production, there is a clear link between the product and its original place of production."

The saffron cultivators of kashmir had pitched for the GI as the value of kashmiri saffron was plummeting from past few years because the saffron from other countries was imported and sold in the international markets by falsely claiming and duping it as the Kashmiri saffron. This was highly devaluing the unique kashmiri saffron and was playing heavily with the farmers who perform the painstaking task to yield the ultimate exquisite saffron that we use; which involves flower picking, then minutely separating the strands followed by the process of drying, and a hectic sequence of tasks.

What is unique about the kashmiri saffron is that it is the only saffron in the world that grows at an altitude of 1600-1800 metres above mean sea level. Kashmiri saffron has three types to it- Guchhi, Mongra and Lachha. These three types differ in the process of how they are dried up. About 50,000 saffron flowers yield only 500 grams of saffron threads. Kashmiri saffron has a higher level of crocin, providing it good colouring strength naturally, it has safranal giving it the special flavour and essence and has picrocrocin that gives the saffron the bitter taste. The filament length is quite long and has a thick head and the colour is deep red.

Pampore, which is situated at a distance of 15 kilometers from Srinagar, is famous the world over for its high grade saffron. Saffron is also grown, though not at a great scale, in Kishtwar of Jammu. Pampore and its neighboring areas produce an average of 2,128 kilograms of saffron every year.

The history of saffron dates back to the times of Persian invasion and the colonization of Kashmir, however it carries the Kashmiri heritage in essence till date and marks the variety of the riches the place contains and the traditional techniques of craft and cultivation.