It points out that poaching for self-consumption and also local trade has doubled during the lockdown but with little evidence of stockpiling of wildlife products for future use. 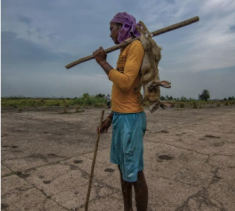 Wildlife poaching has been a serious problem all over the world which has gravely impacted the lives of various animal species. According to Wildlife Crime Control Board (WCCB), 9,253 poachers have been arrested for wildlife poaching in India between the years 2012-2018 and the statistics on animal poaching from the World Economic Forum states, illegal wildlife trafficking is a worldwide business worth up to a staggering $23 billion annually.

When the country shut down to control the virus outbreak, wildlife took a hit. A report by TRAFFIC, a leading wildlife trade monitoring network, stated a remarkable increase in poaching in India during the first two months of lockdown. It points out that poaching for self-consumption and also local trade has doubled during the lockdown but with little evidence of stockpiling of wildlife products for future use.

A report by TRAFFIC titled, ‘Indian wildlife amidst the COVID-19 crisis: An analysis of poaching and illegal wildlife trade” states the increase in poaching of ungulates (animals with hooves) mainly for their meat, as the percentage raised from 22% in the pre-lockdown phase, to 44% during the lockdown juncture.

Also, the hunting down of smaller mammals such as hares, porcupines, pangolins, giant squirrels, monkeys and smaller wild cats has shown a remarkable increase.

Among big cats, a total of nine leopards were reported to have been killed, against four of them in the pre-lockdown phase. Even a few endangered species such as Indian gazelles, were being poached in parts of India during the lockdown.

“If poaching of smaller animals remains unchecked it will definitely lead to diminution of prey base for big cats and also a depletion of the ecosystems. This would lead to more incidents of human-wildlife conflicts and will reduce the success that India has attained over the years in the field of wildlife conservation, ” says Mr Jamshyd N. Godrej, president, WWF India.