Star athlete to killer: The story of Aaron Hernandez

The story of how violence, abuse and illness led to the downfall of athlete, Aaron Hernandez 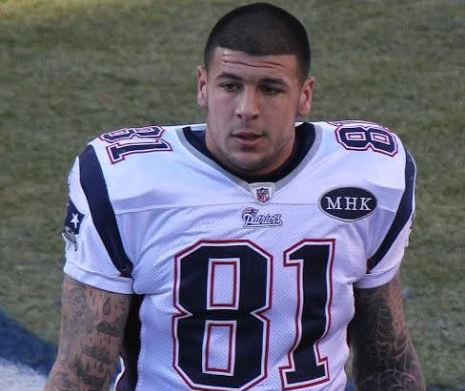 During his NFL career, Aaron Hernandez played for the New England Patriots. Jeffrey Beall / CC BY

Aaron Josef Hernandez, drafted by the New England Patriots in the year 2010, was a tight end in the National Football League and a convicted murderer. On the 26th of June 2013, Hernandez was arrested and charged with the murder of twenty seven year old Odin Lloyd.

Born and raised in Bristol, Connecticut, Hernandez was brought up in a violent environment. His father Dennis Hernandez, although revered by members of the community, had a violent streak and often abused his wife and children. Despite this, Hernandez adored his father. Losing him (his father) at the age of sixteen had a negative impact on Hernandez, causing him to act out and rebel.

Aaron Hernandez had a deep history of violent behaviour. During his trial for the murder of Odin Lloyd, Hernandez was indicted for the double homicide of two immigrants, Daniel de Abreu and Safiro Furtado near Cure Lounge in Boston. He was later acquitted of all charges with the exception of illegal possession of firearms.

In an interview with Doctor Oz, Dennis Jonathan Jr (brother of Aaron Hernandez) revealed that Aaron was sexually abused as a child by an older man. During one of his phone calls with his mother from prison, Hernandez accused his mother of neglecting to medicate him when he struggled with attention deficit hyperactivity disorder (ADHD).

On the field, Hernandez was a hard working athlete and proved it with his performance. While being drafted for the National Football League, multiple teams had elected to erase his name from their draft boards, due to character concerns, given his history with violence and his alleged drug problem.

During the course of his trial and the filming of the documentary series titled, ‘The Killer Inside: Inside the mind of Aaron Hernandez’, numerous questions regarding his sexuality were brought up. Although a clear motive for the murder of Odin Lloyd was not identified, investigators believe that Hernandezes’ fear that Lloyd would disclose the details of the formers possible bisexuality, lead him to commit the crime.

On April 19, 2017, Hernandez hung himself in his cell. His death was officilly ruled as suicide by hanging after medical examination.

After his death, Hernandez’s brain was researched by Boston University where they diagnosed him with severe chronic traumatic encephalopathy (CTE). CTE refers to a neurodegenerative disease which is caused by repeated head injuries. Symptoms of CTE include behavioral changes, violence, impairment of cognitive ability etc.

An article in the Washington Post confirms that Aaron Hernandez was the first person of his age (27 years old), to be diagnosed with such a severe case of CTE. Hernandez was diagnosed with Stage 3 CTE, the first case of it’s kind to be seen in a brain younger than the age of 46. It is believed that this kind of damage to the brain would have affected his decision making ability, cognition and judgement.

The most asked question probably is- why would someone walk away from a young daughter, $40 million contract extension and stardom? There may never be a definite answer to this question.

Aaron Hernandez’s story progressed from a celebrity trial to the revelation of skeletons buried deep in the closet. Whether or not his actions were caused by years of abuse, the environment of violence he was raised in, the lack of parental (emotional) support, bad influences, narcotics, CTE or a combination of them all, his legacy was tainted for good as the world watched the rise and fall of a star athlete.