Have you had sleepless nights and craved for someone to put you to sleep? There’s a way out ! You can now sleep with a faint smile on your face. Read more.. 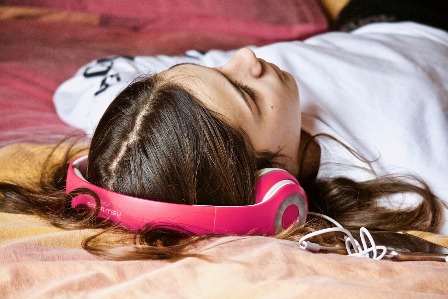 We all know the experience of hearing a favorite song and feeling a rush of pleasure, or instantly starting to tap our feet. That’s part of what makes music such an unique and powerful tool. Different melodies, tempos, rhythms that can trigger different reactions and activate the cells and muscles of all living beings.

Music can impact upon physical, psychological and emotional experiences of an individual, it is an incredibly therapeutic tool for emotional health, happiness, sleep. Music is used as a healing therapy from Ancient Arabic to various nomadic cultures. The Greeks used music to treat mental illness. After WWII, musicians were brought to US hospitals to aid the healing of soldier’s physical and emotional trauma. Music has powerful and diverse effects on both the body and mind, influencing breath and pulse, triggering the release of hormones, stimulating the immune system, and boosting the brain’s cognitive and emotional centers. It can reduce sympathetic nervous system activity, decrease anxiety, blood pressure, heart and respiratory rate and may have positive effects on sleep via muscle relaxation and distraction from thoughts.

Sleeplessness is a widespread problem with serious physical and economic consequences

Sound sleep is necessary for physical and mental wellbeing. Insufficient sleep is associated with a range of negative health and social outcomes, including an adverse performance at school and in the labor market. Sleep disorders may result in fatigue, tiredness, depression and problems in daytime functioning.

Sleep is a complex rhythmic state that may be affected by ageing. Attempts to remedy poor sleep include the pervasive use of pharmaceutical sleep aids, which come with a list of negative side effects. Sales of pharmaceuticals have risen steadily, up 31% in the UK between 2006 and 2011. Pharmacies within the UK dispensed more than 15.2 million prescriptions for sleep aids during 2010–2011 equating to around £50 million or nearly 1 in 10 adults taking some form of pharmaceutical intervention on a regular basis, with long-term use of these medicines comes side effects like nausea, dizziness, dependency and withdrawal, amnesia, seizures, and even an increase in mortality.

Benefits of music as a sleep aid

Music has many promising neurological and physiological effects that may be indicative of its effective use in the fight against sleep loss. In some clinical populations listening to music has been suggested to reduce anxiety and the subjectively negative effects of physical pain. Potential mechanisms for effect are ascribed to the modulation of sympathetic nervous system activity and levels of the stress hormone cortisol. The subjective psychological benefits of music have also been linked to chemical changes observed via hormone levels. A study measuring self-reported relaxation in groups with different objective levels of oxytocin release found that music increased oxytocin and accordingly levels of relaxation compared to control groups. Outside of clinical practice, music is frequently used to self-regulate mood and arousal as well as to decrease negative thoughts. It seems likely that music with certain characteristics, such as slow, quiet and minimal modulation, may be more suitable for aiding sleep than other music and some musical genres (such as new age music) will embody these characteristics more than others.