A look into the teachings of Swami Vivekananda through floral presentation 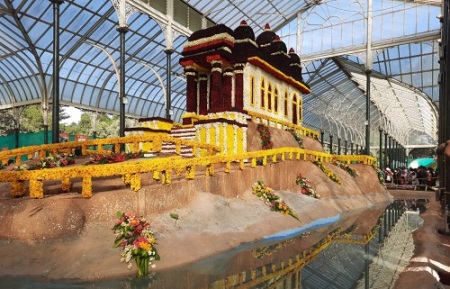 Thousands of flowers of different hues went into the making of the Vivekananda Rock Memorial. Ashutosh Patki/NSoJ

By Nishi Trivedi and Ashutosh Patki

Bangalore: "Arise, awake and do not stop until the goal is achieved", said Swami Vivekananda. His teachings and work were colourfully represented through floral artwork at the Lalbagh Botanical Garden during the flower show here recently.

In the wake of the 157th birth anniversary of Swami Vivekananda, the flower show with thousands of flowers of different species and colours captured the attention of the people. According to news reports, more than six lakh flowers of different hues were used to recreate the Vivekananda Rock Memorial in Kanyakumari; a floral representation of Swami Vivekananda's famous speech in Chicago; and his statue. The flowers were changed twice during the 10-day event. More than 40,000 saffron flowers were used for the statue.

The various quotes by Swami Vivekananda were displayed at the show and documentaries were screened for the Visitors. “It was great to look at the beautiful floral artwork and read about the life of Swami Vivekananda. It was informative and fun outing for me,” said Anjali, a student present at the show. Different varieties of flowers in different shades captured the attention of children and adults. It was said that 37 species of flowers in 235 shades and patterns were on display at the show.

The visitors enjoyed their time clicking pictures of the flowers displayed in different structural forms. “I like photography, and the flower show helped me work on nature photography,” said Tejas, a student at the show. With Rs. 70 as the entry fee and free entry for the children, it was an initiative to educate people on the life of Swami Vivekananda. The weekends saw higher number of people at the show because of which heavy security was in place both inside and outside the premises. The security measures did disrupt the viewing experience of some of the visitors. “At one point the crowd was too much because of which I was unable to view some of the floral structures,” Anjali added.

The Lalbagh flower show was jointly organized by the Department of Horticulture and Mysore Horticulture Society. It was 211th edition which ended on a high note on the Republic day. Another flower show is set to happen in August on the Independence Day.