It doesn't make for one’s ideal Saturday night Amazon Prime experience, but that's not what it intends to do either. 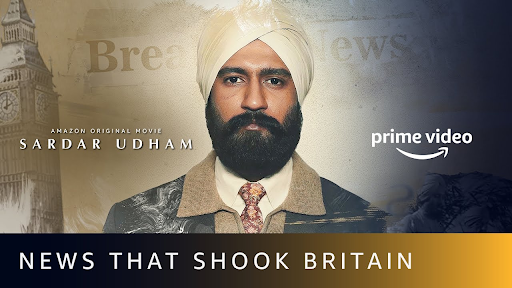 Shoojit Sircar has been political in all his movies. Nowhere, though, does he become as blatantly political as in ‘Sardar Udham’. On the bandwagon of historicals, this film stands out and asks more pertinent questions than many others.

After more than seventy years of development in the industry since the event, it would have been a shame if this story had gone untold. Who better than Sircar to make it scholarly and ambitious? Although, one might wonder if it gets over-ambitious at times.

The movie is set in multiple locations. Played out between 1919 and 1940, it sets out to tell the story of a ‘hero’ who rose from the gruesome violence of the Jallianwala Bagh tragedy.

Udham Singh embarked upon a journey to avenge the killings of thousands in the massacre. Michael O’Dwyer, the then Governor of Punjab who was at the helm of affairs and the root cause for the tragedy, was the target.

Although these statements are passed through to the public in the beginning, Sircar otherwise does not make any special effort to remind us of the massacre until the last hour.

The scenes are short and crisp with very calculated dialogues. The length of the plot might seem excruciatingly long at times, although the fast paced screenplay holds the movie well. A sense of repetition might creep in at times but the sheer erratic nature of the screenplay compensated for the same.

Vicky Kaushal owns the character of Udham Singh, there is sorrow, rage and longing for a cause. With the little information available about the figure, Kaushal utilizes the nuances to his benefit. He is resolute and silent, and yet underconfident at times. ‘Uri - The Surgical Strike might have added him to the top tier of stars in the country, but Udham Singh brings out the actor in Kaushal. The transformation is convincing. From a playful worker at 19 to a ‘revolutionary’ at 40, there is little you can critique in his act.

The relevance of the love interest might be questionable to many. However, it adds human value to the character. The lighter scenes are not for applause from the audience but the character himself.

In one particular scene played out at O’Dwyer’s house, where Udham Singh is working as a servant, both recall the decade-long incident. Separated by a wall of the cottage and perhaps the societal positioning, they voice out their versions of the massacre.

O’Dwyer, played by the brilliant Shaun Scott, thinks out loud and tries to justify the actions. There is reasoning in his speech said out to his servant, but perhaps aimed at resolving his cognitive dissonance as a result of brutal killings. Udham, in the other room, fumes with anger listening to the lack of regret and guilt. He feels uneasy, wanting to shoot his current master and an age-old oppressor, much like the empire he once represented.

Amol Parashar plays Bhagat Singh. He is clear, seamless and smooth, and carries the magnanimity of the legend with confidence. A cameo of sorts, but a national hero of this stature has never been more pivotal to a story.

Sircar brings in a lot of contemporary value with this historical. Bhagat Singh explains and draws out the difference between a revolutionary and a terrorist. There is an impressive monologue on free speech. The movie does not shy away from speaking about this basic right. It subtly comments on the current state of demotion of this right, due to which thousands died a century ago, and many still suffer- the right to protest peacefully.

The criticism of the war and its futility is unapologetically voiced out on different occasions. But a revolutionary’s direct criticism of the same puts the film in contradiction to what it wants to tell. A majority of the movie is in English. Maybe Sircar never eyed the mass reception of the piece; it is a story that had to be told the way it is.

The portrayal of the massacre is painfully real. The creators do not shy away from telling you the chapter of history which barely exceeds a page in the textbooks. However, no account, page or even a book can carry the imperishable form of violence and the unjust pattern of systemic hierarchy. While recounting the day to a British official, Udham says ‘It is just a footnote in your history.’ Perhaps the same remains true for us too.

Death and loss have often been romanticised in Hindi movies, especially in the name of the nation. Seldom has it been as real and heart-wrenching to watch as in this film. The pain of losing thousands of your people and the eventual immunity against the sense of death is a testament to storytelling brilliance.

It doesn't make for one’s ideal Saturday night Amazon Prime experience, but that's not what it intends to do either.