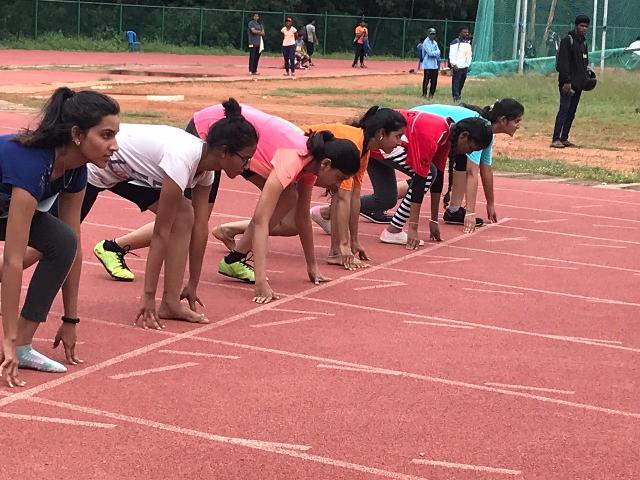 Participants at the 100m semi finals

Bengaluru Central University (BCU) organised its second annual athletic meet at the Sri Jayaprakash Narayan National Youth Training Center,on the 30th and 31st of October. The event was open to all colleges affiliated to BCU, including the National School of Journalism (NSoJ). There was a huge turnout and nine students from NSoJ had the privilege of participating in this event. This being an athletic meet, there were field and track events, with each college allowed two participants per event. Our sports secretary Varun Nishant brought glory to our college by winning bronze (third place) in shot put.

NSoJ students also participated in track events, such as the 100m and 4x100m relay. Although we couldn’t win, it was a good effort and an exhilarating experience to just be part of the entire event. It brought new perspectives to each of us participants. We realised there were similarities with how competition works in the real world.

Every team received a lot of support from their respective colleges (our college mates were very vocal cheerleaders!) adding to the motivation of the athletes. Before the start of every event, participants were told that in each heat only two people would be selected and that the final round would comprise the top two from each heat (the total number of heats depended on the number of participants ) Naturally, this made us all feel both excitement and nervousness. It hit us like a truck that running fast is not enough, we have to take giant leaps to secure a position in the event. What’s more, the group events such as the relay, required good team effort and coordination amongst the four team members. It’s all about strategy and skill, placing the fastest runner in the right position to obtain a good lead. Being absolutely calm and prepared is also key — for dropping of the baton can cause disqualification. We knew that quickly passing the lead from one teammate to another would become the most crucial component in an event like relay.

Having been involved in sports, especially athletics, for over seven years (with breaks in between), the event turned out to be a life-changing experience for me. Making it to the finals of any event is a challenge and I was proud to be part of the top eight runners in 100m. The entire event was organised in a meaningful fashion, there was no chaos and it’s one of those events which you’re happy to be part of simply because it involves sports. This was an inter- collegiate event and it was really tough competition! Yet, each competitor was so pleasing to watch while they were running. In fact, some athletes stood out because of the pace at which they were running -- it was as smooth as butter.

Overall, it was one of the most educational experiences ever. All nine of us participants, learnt a lot. These are our top takeaways from the event:

1: Practice is what takes people places

2: It’s impossible to just start running or playing (a sport) without having to work for it

3: It takes weeks and months to become an effortless runner

4: And finally, we learnt that accepting defeat is part of the game. Not everyone can be a winner, there will be losers too; if there weren't then where is the competition? Learning from others and accepting defeat makes us rectify our mistakes and motivates us to do or work that extra mile. Also, success doesn’t just happen, it requires a lot of hard work, persistence and determination. 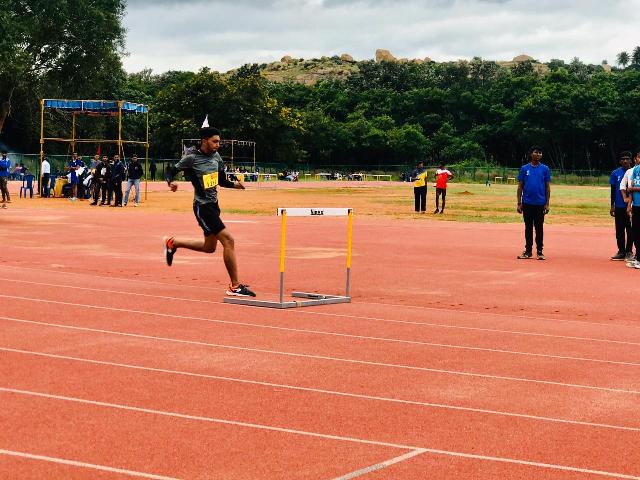 In action: Pavan from UG1 participating in hurdles