Riding the wheels of change

A movement which started over a decade ago is making remarkable changes in many lives. 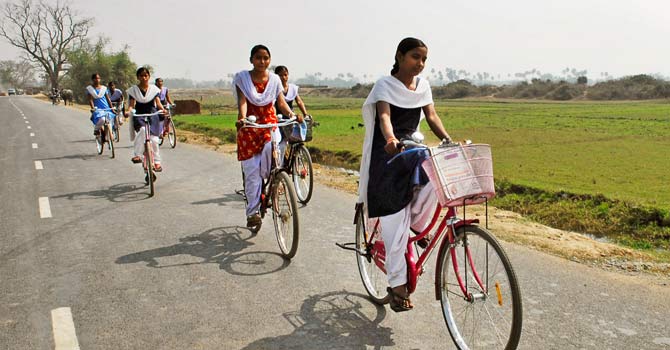 Cycles have proven to be the chariots of social change Credits: AP

The story goes back over a decade in 2007. In the economically penurious and socially retrogressive Bihar, the state government in its rapid drive to revamp the 'bimaru' (sickened) state's destiny, rolled out an ambitious scheme 'Mukhyamantri Balika Cycle Yojana'- to provide financial aid to girls to buy a cycle once they reach the 9th standard.

The objective of the pet project aimed to arrest the massive school drop-out among girls in the state and also, latently, nudge social changes while riding on the pedestal of women empowerment.

Since the scheme commenced ( in 2007), lakhs of young girls have benefitted. In a state rife with corruption and fraudulence, the scheme, as per the Bihar government, suffers a meagre 1% misuse of the funds.

An instant outcome of the successful implementation of the ‘yojana’ was a three-fold increase in the enrollment of girls in class nine in four years.

The number of girls writing their 10th board exam (1.87 lakhs in 2005 to 8.26 lakhs in 2019) registered a phenomenal rise, that too, not only in aggregate numbers but also in proportion to those missing out.

Among the reasons families cited to pull back their daughters from schools, included the distance of the institution. 'Cycle Yojana' nullified this excuse.

The advantages of ‘shortened’ distances are translating in their performance. Girls, as of today, with admirable consistency, are the chartbusters in the list of toppers. For instance, once again ‘daughters’ captured 1st rank in all three streams in 2021.

However, fair documentation of the upshots necessitates an encompassing spectacle. The success of it is anchored in the everlasting disruption caused to repulsive societal norms.

If patriarchy is prevalent with Bihari characteristics, the problem is even more pronounced. Daughters in Bihar being shunted out of schools after a certain age and their movement curtailed to the peripheries of the home was acceptable a decade and a half ago. Learning life lessons primarily from mother, aunts and friends, who were reeling under the same societal stranglehold, a female adolescent in the state had little or no exposure to the outer world. Thus, leaving her choices, sexuality, goals and overall future greatly controlled and compromised.

Daughters and sisters of Bihar have come a long way since then. Trapped in the clutches of prevalent regressive practices of society, these cycles, originally meant to facilitate education, haven't just been a mode to ease the stranglehold but to vent it and carve out a space for self.

Flirting with the narrow rural lanes to racing and bypassing the bustling cities, these cycles in Bihar are proving to be the chariots of social change. 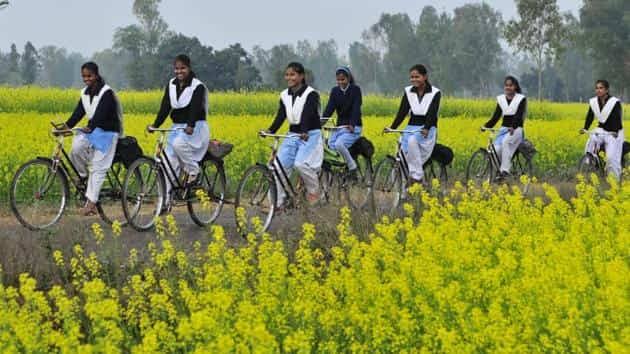 "If one asks me to draw one picture of Bihar during my term as CM, I will not draw any building, road or bridges but of girls cycling their way to school"- CM Nitish Kumar in his blog. Credits: Hindustan Times

Witnessing girls in uniform flocking in masses on shiny new cycles to schools and coaching centres, and at the same time consciously keeping a check on their ‘ever-rebelling’ dupatta is an unmissable sight.

While the conservatives have toned down their yelling, it's the 'progressive-minded’ parents who are augmenting the path to the envisioned idea of empowerment.

I can vividly recall my early days back in Bihar in a nondescript village. Me, a boy in his 14-15, faced indirect indignation when the mother of my cricket playing mate - a girl, who happened to be my immediate neighbour, was barred from playing with me, even under their gaze. Today, observing that very same girl paddling to the local high school, unfazed to crack jokes and laugh alongside male classmates while passing through village lanes and the busy route of the local market, entails a telling image of change.

Now aspirations and curiosity transgress academic confines. The desire to deviate and explore a different lane, if there was a shortcut, or, to gather at a friend's house is seeing the daylight. Creeping urges to go by a different route, also made way for cravings for local delicacies. Amidst all the hustle and bustle of a 'chowk', noticing girls competing with each other over the number of 'paani-puris' one could take in is metaphorically sweet even if the 'paani' there is unsparingly spicy.

To not skip a very obvious social shade reflected by the 'cycle- canvas' is girls in puberty unashamed of being receptive to their biological changes. Hormone hyphenated attraction for the opposite sex is no more hesitatingly hidden by the girls on wheels. From an all-girls group going to and from their schools, to now a fairly heterogeneous group, in terms of boys and girls, all cycling their way through is a remarkable achievement.

The most basic two-wheeler has also brought markets closer to these girls. Gone are the days when shopping was the responsibility resting solely on the male shoulders.

Delayed marriages and the rise in the cases of love marriages (read inter-caste marriages) in the state are also direct manifestations of the noble idea ushered 16 years ago. 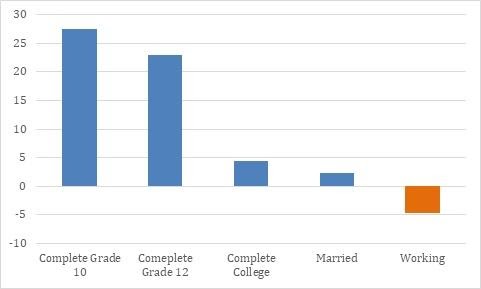 Note: The figure shows how much more likely a girl from Bihar who got a cycle under the scheme, is to complete a certain level of education or to get married or work, vis-à-vis a girl from Bihar who did not get a cycle, with everything else about these two categories of girls being the same. Credits: IDEAS FOR INDIA

In the words of the praiseworthy Chief Minister, the idea induced 'yugantkari parivartan'. An epoch-making change.