A retrospective on iconic photographer Prabuddha Dasgupta showcases his work across fashion, landscape, and portraiture 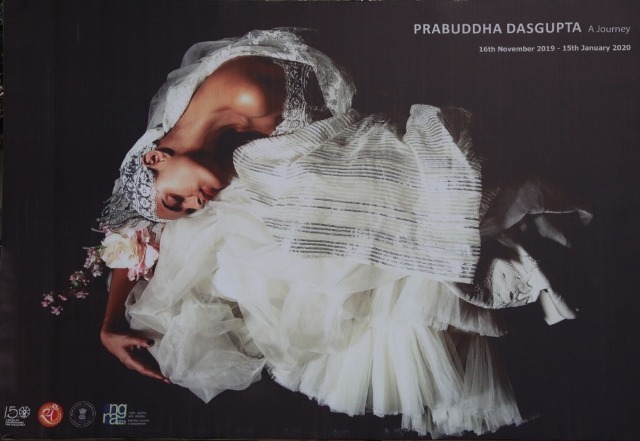 A fashion shoot by Prabuddha Dasgupta

Bangalore: Have you ever tried imagining your life in black and white? What if doing so could express life in a much more colourful manner? Well, the late Prabuddha Dasgupta did exactly that through his iconic black-and-white imagery.

A retrospective exhibition, titled “Prabuddha Dasgupta: A Journey”, at the National Gallery of Modern Art (NGMA), Bangalore, showcases the photographer’s work across fashion, travel, and fine art. The entrance to the exhibition has a black-and- white photograph of Dasgupta holding a camera-which is probably the way he would have liked to be remembered.

Born to a sculptor, Pradosh Dasgupta, who became the director of NGMA (National Gallery of Modern Art), Delhi, Prabuddha Dasgupta’s “journey” as a photographer probably began in the corridors of the NGMA when he was young.

Prabuddha Dasgupta worked in practically every genre of photography – from creating purely aesthetic and artistic projects to doing work for major brands through fashion shoots with supermodels. He also did advertising campaigns. His preferred medium was black-and-white.

His work, as seen through the exhibition, is simple and yet, rich in sensuality. “Prabuddha Dasgupta documented his personal touch towards life, especially through his ‘Longing’ series. The black-and-white tone he created was bold and the balance he maintained between a human body and jewellery was extraordinary,” Darshan Kumar, Deputy Curator of NGMA, Bangalore, told NSoJ. The exhibition, according to Mr Kumar, “is an opportunity for everyone to get connected to the artist and his creativity.”

The exhibition includes 94 frames that showcase his mastery over different subjects. He was fascinated with both people and places. So, apart from his fashion work (especially those featuring his muse Lakshmi Menon), there are also beautifully stark landscapes of Ladakh and Hampi. The photographs capture both his eye for sensuality and his ability to see the beauty in harsh realities. A viewer gets to see an amalgamation of hope and despair, joy and sorrow, often in the same photograph.

He often saw beauty where others didn’t; for example, the play of light and shadow (as seen in the photograph of a staircase). His work was about breaking boundaries, laid down by society, just as he lived his life. That is something visitors to the exhibition also noted. Steven and Pauline Patterson from Ireland told NSoJ that they were attracted by the boldness of some of the works on display. “The photographs are very diverse. The portraits and landscapes are showcased in great detail. They are spectacular. Dasgupta was a very unique artist, and all of you in India should be proud of his work,” they said.

Looking at the works on display is to merely skim the surface. Dasgupta did not just straddle multiple worlds -- of commerce and art, he created a new creative language, using a simple analogue camera, the exhibition is also a window to the man and his artistry – to see him for who he was, to understand and empathise. And that is when his work truly begins to sing.

Prabuddha Dasgupta’s works will be on display till January 15, 2020, at the NGMA Bangalore.

NOTE: A previous version of this story carried an image that was wrongly attributed to Prabuddha Dasgupta. The error is regretted.