A film that poses a strong statement on the dysfunctional judicial pilgrims.

Chaitanya Tamhane’s latest film,‘The Disciple’, is winning several international accolades. The movie is co-produced by Academy Award-winning film director Alfonso Cuarón. This is the perfect occasion to revisit one of Indian cinema’s most heart-wrenching depiction of class division in Tamhane’s directorial debut, ‘Court’.

There are few movies in today’s times that are blatantly critical of government institutions. We come from a culture where celebration, whitewashing, and dramatization of day to day events of such offices is the norm. In all this, when you see a piece of art that creates a simple, realistic and painstakingly slow environment of the same, you are sucked into it straight away. ‘Court’ is by no means a perfect film but is the closest to the approximation of perfection.

Narayan Kamble, a Dalit folk art singer and a part-time teacher, is accused of abetment of suicide of one of BMC’s sewer workers, Vasudev Pawar. The worker who had attended the performance of the singer allegedly took the song too seriously and committed suicide down in the sewer as a form of protest.

This is less of a courtroom drama and more of a comment on the obnoxious working of it, which still majorly functions on the hundred-year-old, outmoded and somewhat irrational and draconian laws (look out for the mention of the UAPA). Though there is no ‘Tarikh pe Tarikh’ dialogue, the fact that these cases go on for months - if not years - while completely undermining the prospect of the accused being innocent is both frustrating and saddening.

Class bias, in this part of the world, is way different than anywhere else - it is both institutionalized and cultural. It is embedded in our genes. Watching it get exploited on the screen so unapologetically will fill you with a lot of shame, a necessary shame. 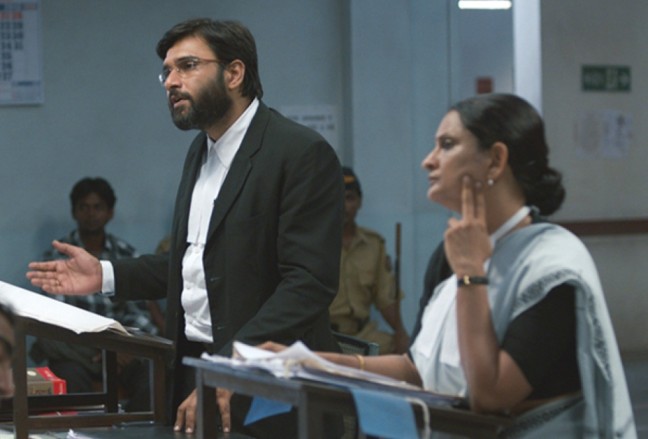 A still from the movie

The slow treatment of the plot leaves a lot of time for Chaitanya to dig deep into every character, and he does that masterfully. Vinay Vora - who is representing Kamble - is sane, sympathetic, and extremely patient, yet his Gujarati aristocracy is far from the vows of the slum traditions. The public prosecutor is a Marathi middle-class lawyer, too desperate to get done with the case and wanting to be the judge in her career. There is a distinct graph which you notice here - a clear conflict of ideologies and positioning in society. This subtlety makes ‘Court’ the gem it is. Not all heroes are 6-feet tall with the ability to fly; some are just like you and me: with a fire in their heart and an unabashed devotion towards their goal to attain social equality.

In one of the final scenes of ‘Court’, the courtroom shuts down and people start moving out. With the camera placed wide open in the room, you feel like a Narayan Kamble sitting on one of the benches, wanting to achieve justice but not ready to beg for it. The lights are turned off, the door is closed but you are still there, for 10 more seconds, glaring with wide eyes, feeling claustrophobic and mourning over the fall of the great judicial system. 10 of the best movie-watching seconds ever.

There is a statement, a rather strong one, made in the end. You see the friends and family of the judge going to a beach resort to enjoy the summer vacations. Men are having liquor, talking about earning a crore a month, women are enjoying sumptuous food and the children are playing in the water park. But some 65-year-old Narayan Kamble is sitting within the four walls of the jail with jaundice, some Mrs Pawar who lost her husband in a sewage disaster is wondering how to carry her life ahead. This will take a lot of time to sink in, but let it.

What makes ‘Court’ stand out from the rest is its audacity and honesty. “An art should comfort the disturbed and disturb the comforted,” said Cesar Cruz. We all are, indeed, very comforted.