A student journalist from NSoJ's UG1 pays tribute to a young cricketer gone too soon. His passing was a tragic event but it also taught her the true spirit of the game. 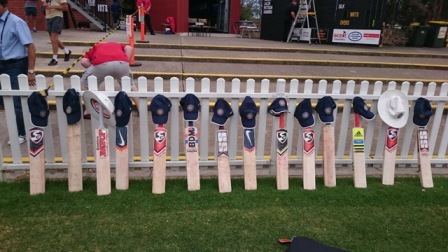 She was almost 14 when she saw the NDTV notification: “Phillip Hughes loses his life after being hit on the head by a bouncer.”

“Can people die playing the sport I love?” she asked herself. Throughout that day, her social media feed was filled with tributes to Hughes. Pictures of Aaron Finch, David Warner, Michael Clarke, Shaun Marsh, and several other Australian cricketers crying surfaced. Her heart ached, a feeling foreign to her. She read about how Michael Clarke’s eulogy warmed the hearts of the world of cricket. She gathered up the courage to watch his eulogy and in the end when he said “My little brother, I’ll see you out in the middle,” she was left speechless. That night, she cried herself to sleep.

Love for their brother

In his eulogy, Clarke said he now realised what indigenous Australians meant when they said that a person’s spirit is connected to the land they walk on. He strongly believed that Philip’s spirit had touched the Sydney Cricket Ground; he could almost feel his presence when he knelt down to the pitch and touched the grass. A week later, Clarke scored a test century against India at the Adelaide Oval. He raised his bat, looked up to the sky and tried to hold back his tears. After this innings, an injured Clarke was ruled out of the series but knew that he had made Hughes proud. Steve Smith scored a century that game. He took off his helmet, walked up to the 408 (Hughes’ test number) printed on the field, looked up and raised his bat to honour his dear friend. A few days later, at Sydney, Warner scored a century, knelt down and kissed the spot where Hughes had collapsed.

At that time, somewhere in Australia, Sean Abbott who bowled that bouncer to Hughes, was making a return. In that game, with a black band around his arm, Abbott recorded his best figures and took six wickets. He too dedicated his performance to Philip Hughes. The hashtag #welcomebacksean showed that the world of cricket had nothing but compassion and love for the pacer. A few months later, Australia won the World Cup. Clarke was their captain. Every game, the players wore the ‘408’ black armband to honour their fallen mate. Hughes was supposed to have been in the 15-member World Cup squad and the day the team lifted the trophy, they felt his presence. Clarke could feel his little brother smiling with pride.

The spirit of cricket

The 14-year-old girl watched and followed all this closely. She felt a bond with the Australian cricket team. When she saw Australia lift the (World Cup) trophy (in 2015), she realised that cricket was walking out of the tenebrosity and finally coming back to life.

While cricket fans all around the world lit candles to pay tribute, several cricketers put their bats out, people covered the gates of the House of Cricket (at Lords’ Cricket Ground in London) with flowers; and the legends of the game expressed their grief. They did this for Hughes.

“Is this the spirit of cricket?” questioned the girl along with Clarke. She was 14, and the question remained unanswered.

That girl is now almost 19. She has finally realised what the spirit of cricket is. It has been five years since the world of cricket stopped and came together. Every year, the month of November is celebrated with “brightly coloured memories of a teammate for life,” as Clarke put it. The tweets and tributes have not stopped. This special unexplainable bond between the players, the viewers, the followers and the game, is the spirit of cricket. The sign of the world stopping for one individual every year describes the spirit of the game.

Even now, she tears up thinking about the incident. Her heart aches when a bouncer hits a batsman. A small smile creeps in when every Australian looks up at the sky after a five-wicket haul or a century. It warms her heart to see that the entire team kept the promise they made their teammate, their brother - it makes her believe in ‘promises’.

This incident didn’t just teach her what the spirit of cricket means. It taught her that a game like cricket can bring you out of despair.

Five years on, the world of cricket still misses you, Philip Hughes. This world will celebrate you forever.