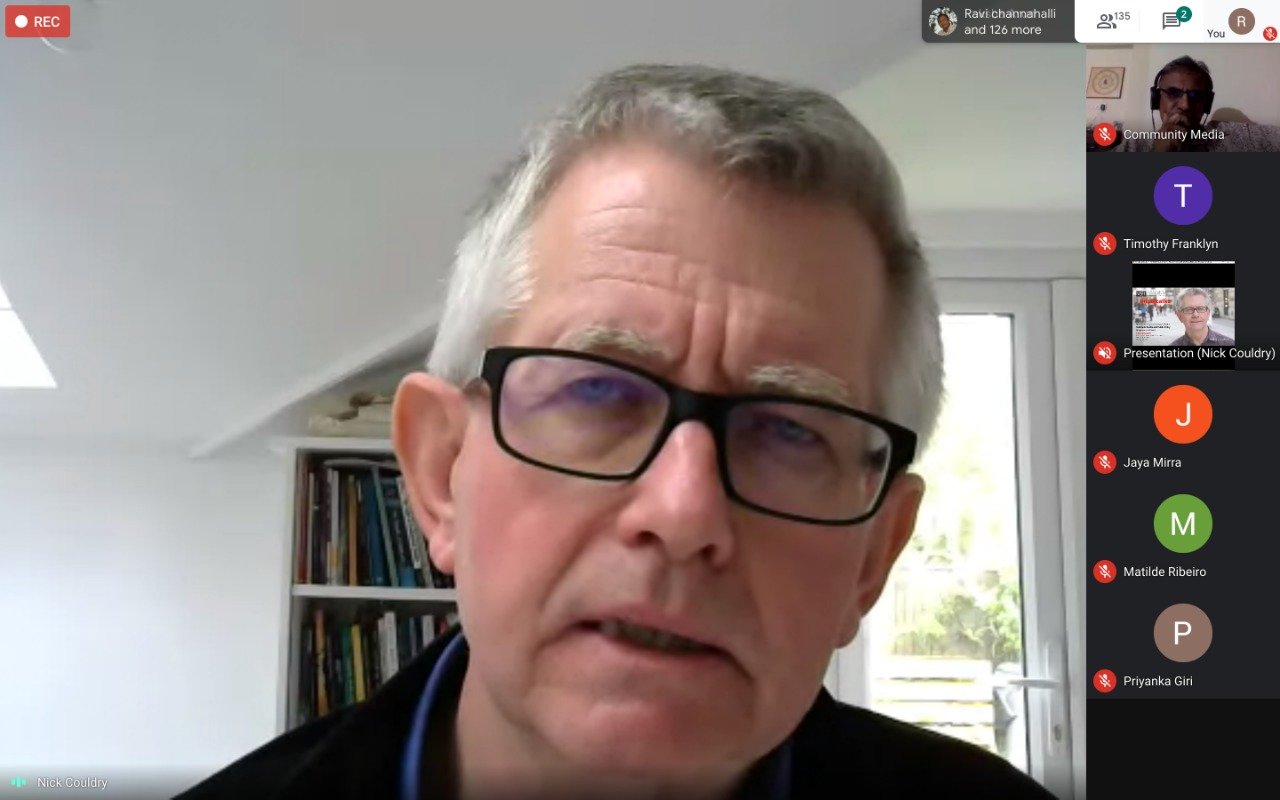 National School of Journalism and Public Discourse (NSoJ), as part of its Talks @ NSoJ series, organised a virtual talk on Thursday, 30 April 2020, entitled "Remembering Journalism’s Public Rationale: Media and Public Policy Responses to COVID-19" by Nick Couldry, Professor of Media Communications and Social Theory at the London School of Economics and Political Science (LSE). Prof. Nick Couldry has also been a faculty associate at Harvard since 2017.

The spotlight turned to Prof. Couldry after communications consultant Ashish Sen's warm and insightful introduction. Prof. Couldry commenced his discourse providing general context, approaching the topic from a humanistic perspective, providing insights to help comprehend the bigger picture by invoking the striking reportage of renowned contemporary journalists, John Vidal of The Guardian, David Quammen of The New York Times and Bill McKibben of the New Yorker. He addressed the deeper challenges COVID 19 presents for humanity by explaining the multiple levels of crises: the global health crisis as well as the global economic crisis whose uneven effects create a social crisis which can result in a reality crisis for deniers of truth.

Prof. Couldry elucidated the kind of opportunities these crises create for authoritarian surveillance and political parties to counter and check which free flow of reliable public information becomes crucial. While probing the rationale of journalism as an institution, he listed the immediate economic threats confronted by media all over the world and led us to the three converging problems of (i) what journalism can currently be, (ii) who and what will pay for it, and (iii) what the threats are stemming from absence of journalistic institutions existing independent of the state. This third question formed an important point of discussion as Prof. Couldry urged everyone to consider the institution of journalism from the viewpoint of human societies and not merely democracies in particular.

Understanding the roles of freedom

Prof. Couldry cited the theory of Nobel Prize winning Indian economist, Amartya Sen, on recontextualising economic goals with considerations of ethics, and extending it to the conversation around the sociology of journalism. He highlighted the roles of personal and institutional freedoms in steering the free press forward. The notions of personal freedom ensured that diverse voices and perspectives were not ignored. He illustrated the ill effects following the absence of institutional freedom with the instance of China’s massive famines in the years 1958-1961 wherein the lack of free news distribution played a significant role. He added that Amartya Sen’s approach of human development being the ultimate goal in economics should be more readily embraced in journalism and he called for a reinterpretation of the theories of free press through this lens of human development.

Referring to legal theorist, Ed Baker’s arguments on complex democracy, Prof. Couldry elaborated on the complex role of journalism which involves the harmonious coexistence and effective functioning of both segmented and general media which would enable the public to clearly see what really is going on. Following this, he reinforced the four basic roles of media institutions: first, providing information for elites and the general population, second, presenting the recognized diversities of life, third, speaking truth to power, and fourth, serving to redress injustice. These roles and their fulfillment, stated Prof. Couldry, would draw the attention of the government and public towards ignored groups. He explained that to tackle the special challenges raging in the context of the COVID-19 crisis, journalists ought to test the contested facts, point out injustices and exercise their special capability to present diverse perspectives in terms of class, gender, profession, ethnicity and engage in this pursuit with a steely resolve.

His concluding remarks focused on the changing institutional structure of journalism which remains potentially destructive towards its very historic, economic and ethical models. He presented everyone with larger, urgent questions to ponder regarding journalism as an institution and its scope for sustenance. In the interactive session that followed, media students, professionals and scholars from different countries raised pressing questions. In his answers to these wide-ranging questions, Prof. Couldry emphasised that this is the time when journalists ought to be clear-sighted regarding what their long-term values are while they challenge facts with more facts and inspire informed reflection of the public. He also addressed key issues affecting media, ranging from pay-wall systems, considerations of sensitivity and dignity, to reliability, minimising fear, and the rationale of community media and social solidarity.