Udbhavi Balakrishna (NSoJ BA '22) gives you a guided tour of the beauty of Karnataka, its people, geography, languages and culture. 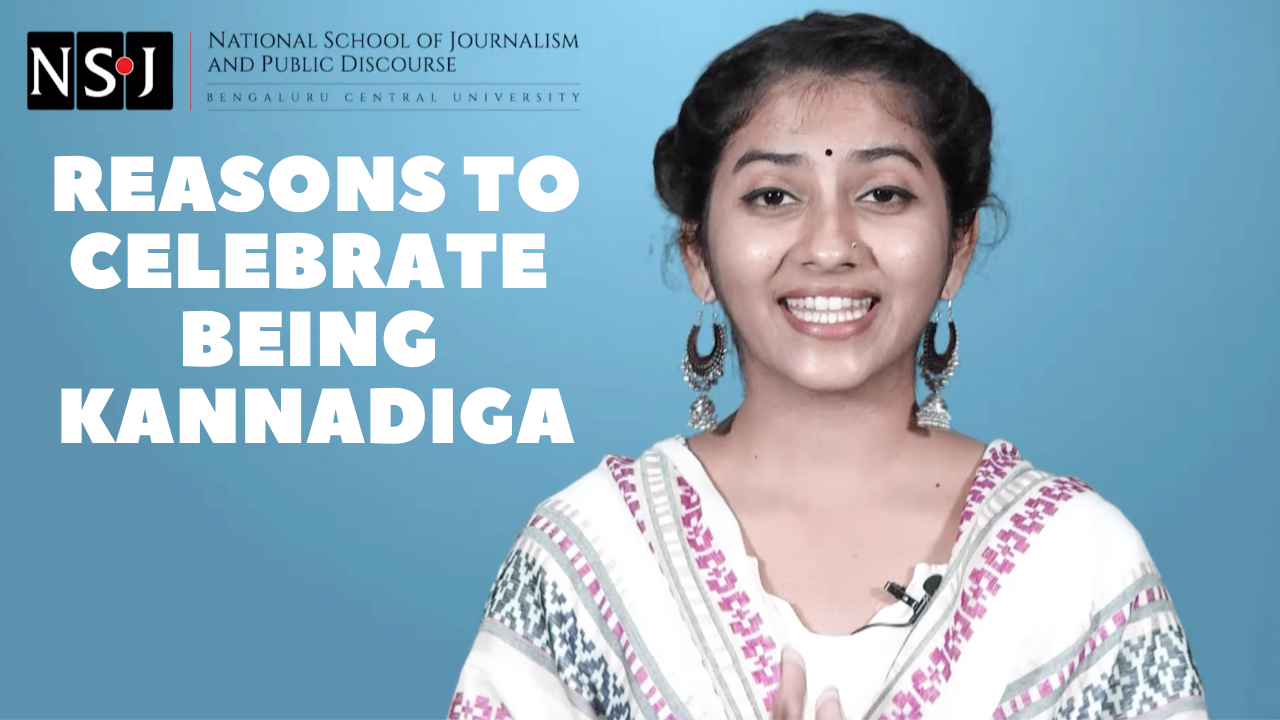 Today marks the 64th year since this beautiful land emerged as one state for all Kannada-speaking people. On November 1, 1956, several regions merged to form the state, which was originally called Mysore. Kannada Day has been celebrated on November 1 every year since 1956 to commemorate the formation of the state. The state was renamed Karnataka on November 1, 1973.

I invite you to read this feature and find your own reasons to celebrate the beauty of Karnataka, its people and its language and dialects.

The diverse linguistic and religious ethnic groups that are native to Karnataka, have contributed immensely to the varied cultural heritage of the state. Apart from Kannadigas, Karnataka is home to Tuluvas, Kodavas and Konkanis. Minor populations of Tibetan Buddhists and tribes like the Soligas, Yeravas, Todas and Siddhis also live in Karnataka.

While Kannada is the official language of the state of Karnataka, Tulu, Konkani and Kodava are other native languages in Karnataka that have deep roots. Less widely spoken languages include Beary Bashe, which is spoken predominantly by Muslim communities in the Karavali.

Kannada's literary heritage is rich and diverse in terms of both religious as well as secular expressions. The most famous of Karnataka's poets, Kuvempu, who is celebrated the world over for his social messages and impact, wrote the state anthem of Karnataka, Jaya Bharata Jananiya Tanujate.

Stretching from the vast coastal expanse in the west to the famous gold mines in the east, from the well-known "Jolada rotti" in Uttara Kannada to the Coorg culture in the south, the mighty Western Ghats to the "Dakshin Ganga" Kaveri, from the bustling metropolis' to pristine nature, rich with history, culture and modernity, Karnataka has the best of everything.

The bountiful landscape of Karnataka is fed by the mighty rivers of Kaveri and Krishna, along with their tributaries. The coastal region of Karavali, that spans about 320 kms, paints a beautiful picture that is in stark contrast to the Bayaluseeme region, which is the second largest arid region in india. The hilly Malenadu region comprising the Western Ghats boasts some incredibly scenic natural places. The rich flora and fauna are spread across the state. Karnataka's forests are home to 25% of the elephant population and 10% of tiger population in India. Endangered species such as sloth bear, black buck and Kolar leaf-nosed bat are also found in Karnataka’s forests.

While Karnataka and, in particular, its capital, Bengaluru, are now a melting pot of different cultures, the relics of history stand tall. Hampi, Badami, Aihole and Pattadakal, Belur and Halebidu - the remains of the erstwhile powerful empires that ruled the Southern regions are recognized UNESCO world heritage sites, where millions of people from around the world throng to everyday. The intricate workmanship in these monuments pays tribute to the glorious heritage of the Vijayanagar and Chalukyan empires, and are amongst the most popular historical attractions in the world. Like the largest monolithic Gomateshwara statue in Shravanabelagola, the Gol Gumbaz in Bijapur, and the Jain pockets in Kundapura and Moodabidri, there are many such multicultural and religious centers in Karnataka. Did you know that the Mysore Palace gets the 2nd highest footfall of all foreign tourists visiting India?

The traditional folk arts in Karnataka cover the entire gamut of music, dance, drama and storytelling. Yakshagana of Malnad and coastal Karnataka, a classical dance drama, is one of the major theatrical forms of Karnataka. Veeragase, Kamsale, Kolata and Dollu Kunitha are popular dance forms. The Mysore style of Bharatanatyam, nurtured and popularised by the legendary Jatti Tayamma, continues to hold sway Karnataka.

The Haridasa movement of the sixteenth century contributed significantly to the development of Karnataka or Carnatic music as a performing art form. Purandara Dasa, one of the most revered Haridasas, is known as the Karnataka Sangeeta Pitamaha ('Father of Carnatic music'). Celebrated Hindustani musicians like Gangubai Hangal, Mallikarjun Mansur, Bhimsen Joshi, Basavaraja Rajaguru, Sawai Gandharva and several others hail from Karnataka, and some of them have been recipients of the Kalidas Samman, Padma Bhushan and Padma Vibhushan awards. Violin T. Chowdiah, Veena Sheshanna, Mysore Vasudevachar, Doreswamy Iyengar and Thitte Krishna Iyengar are some of Karnataka's most famous musical sons.

The beauty of Karnataka, its people, languages and culture are underpinned by a strong foundation of hospitality that welcomes people from around the country and the world to make Karnataka their home. And when you accept that hospitality, you become a Kannadiga. Let us celebrate that!