Ragnarok: Neo-fascism and the end of democracy

Many versions of the Ragnarok mention that it is not only the end but also the beginning of a new age. 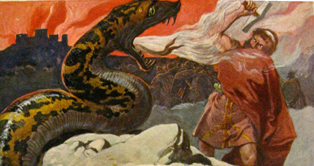 Ragnarok. The cataclysmic extermination of the entire cosmos. The Norse prophecy of impending doom explains that there will come a long harsh winter ( fimbulvetr, anglicized as “Fimbulwinter”) that will leave mankind desperate. In this struggle to survive, they resort to a violent, lawless and immoral way of life. And so begins the age of battle and bloodshed, where civilizations crumble.

The sky splits open and the warriors emerge, ready for a brutal battle against their enemy, Loki and his cohorts. Although they knew of this fateful end, they chose to fight to the death. In the end, the remains of the world sink into a vast sea until there is nothing except for the ‘void’.

Now, you may or may not know about this mythical prophecy of impending doom, some of you may be hearing it for the very first time. Regardless of how you feel about monsters and battles, I believe that we have a much larger problem at hand.

Neo-fascism. Neo-fascism is an ideology that includes ultranationalism, authoritarianism, nativism, racial supremacy, xenophobia and opposition to immigration. That does sound very familiar, doesn’t it?

Neo-fascism has slowly woven itself into the fabric of our society. Many may disagree with that statement but, if you look back at the recent developments in the political landscape of several countries across the world, ours included, you will observe a pattern that indicates that there is something very fundamentally wrong with the way we’re progressing.

Brazil’s President, Jair Bolsonaro, is known for his authoritarian system of governance. Fueling the rise of gun ownership, championing deforestation in the Amazon rainforest, and downplaying the effects of the pandemic, is just a small part of his problematic and vindictive governance.

Globally, there is an unprecedented rise of ultranationalism. The ‘us vs. them’ phenomenon, (them being the supposed enemy’), has almost become a norm.

In India, we have borne witness to the revocation of Kashmir’s special status, followed by an internet shutdown across the region, along with the Citizenship Amendment Act protests, which are just the highlights of the communal divide and ever-rising political unrest in the country.

Millions of people have taken to social media, condemning the excessive deployment of troops and the acts of violence against civilians. But is that enough?

Forces that advocate ideas like racial purity and dominance of the state’s interest are not held to account. Is this democracy? Have we diluted the concept of being a free people through our ignorance? Are we doomed to step into an era of fascism?

Light at the end of the tunnel

With more young adults taking an active interest in matters pertaining to politics and the government, and the use of social media as a platform to make their voice heard, are we finally going to hold governments accountable for their actions?

"We have a history of being subservient or too kind to our government. But the reason why this won't happen again is the empowerment of the Indian youth. With a platform and the ability to voice our opinion, politically aware youngsters have become the fiercest saviours of our democracy," says Anuj, a student and political enthusiast.

Some say that Ragnarok is the ultimate end of life as it is. But there are many versions of the tale that mention that it is not only the end but also the beginning of a new age.

Maybe this is a new beginning. A beginning that allows us to learn from our mistakes. A beginning where we exercise our power and be faithful to our duty as citizens. We’ve learnt quite a bit from recent events. We’ve endured much.

One can only hope that these experiences lead to the resurgence of a strong, unwavering democracy, and not a fascist state.