Princes, Princesses And One Storyteller

A storyteller takes her audience on a magical, enthralling tour through folklore and stories from mythology 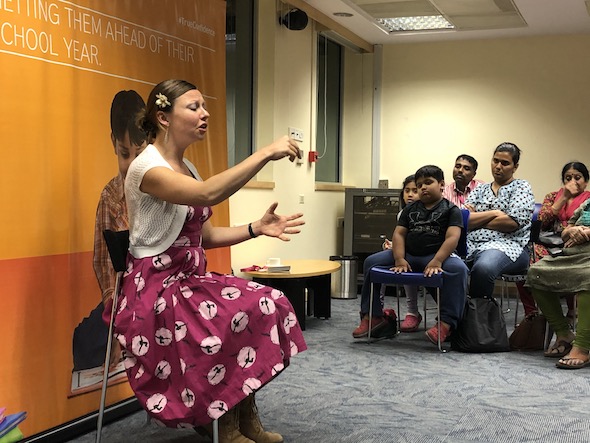 “When a storyteller hears a story, they retell it, but put their own curl to it,” said storyteller Emily Hennessey during a storytelling session at the British Council, Bangalore on October 16.

Her stories range from re-telling of folklore to feel-good stories with simple morals about the importance of family, the power of words, and so on. Although Emily has a Swedish background, many of her performances are centred around Indian mythology. “After travelling through Nepal and different parts of India, I became interested in how mythology is alive and a part of everyday life and conversation, because gods and goddesses are believed to be present everywhere.”

The performance, themed ‘The Good, The Bad and The Ugly’, took the audience through the mystical lives of princesses, and forests teeming with trolls, supernatural creatures from Scandinavian folklore. She began the session with a story of a weary queen looking for a worthy successor among her three daughters, morphing quickly from a princess standing at crossroads, to a queen indignant at the idea of being insulted.

“Would you like to hear a harsh story or a sweet one?” Emily asked the audience, before going on to narrate a story of each. The harsh story was something similar to the story of Hansel and Gretel, but followed a boy named Butterball who was carried away by trolls. The second story, which followed a girl who was disowned by her father but found a happy ending after she reconciled with him and married the prince, is modeled on the story of Cinderella.

Adults and children of all ages participated in the session, gleefully providing prompts to ‘help’ her take the story further. She also encouraged the audience to make background noises such as the sounds of knocking, and barking of dogs. Children who attended the session, were delighted with the idea of being involved in the story and were practically bouncing in their seats. “I liked the stories and her expressions were very funny,” said Sanvi, age eight.

With aspirations of becoming an actor, Emily decided to try her hand at storytelling. “After listening to my professor, Dr Vayu Naidu, narrate the story of the birth of Lord Ganesh, I realised that this art is a form of magic.” Employing various techniques, such as modulating her voice, and using body language, she helps her audience visualise every detail of the stories she narrates.

“When I thought of storytelling, I thought she would just stand and narrate a story. I did not expect it to be as engaging as it was. It felt like Emily was living the stories and took us along for the ride,” said Udbhavi, a college student.