Poetry, Nature, And A Changing World

Ruth Sophia Padel, British poet and author, shared poetry from her recent books that ranged from conservation to migration, at a recent event in Bangalore. 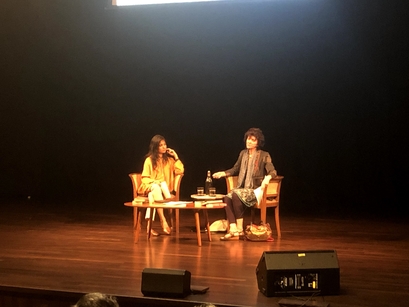 Ruth Padel at a recent event in Bangalore International Centre

Bangalore: “Poetry is witness to a changing world,” said Ruth Padel, award-winning British poet. She believes that it was a small art-form that began as a way of remembering details.

Ruth Padel, is a poet, author, and wildlife conservationist who works closely with endangered species in India. Her work revolves around nature, and that is not only a setting for her poems, but also plays a scientific role in safeguarding certain species. “In my books, Tigers in Red Weather and Where the Serpent Lives, conservation connects with writing,” she said.

Wildlife is considered to be a vital part of the biological ecosystem. To conserve the forests, one must conserve the wild animals living inside them. Wild animals require proper food, exercise, weather, and shelter to survive. Without one of these, the animals have to either evolve or die.

Ms Padel believes that animals and human beings are similar in various aspects. Wild animals are wise, they have a strong memory, and a sense of direction. She said, “both species migrate or are forced to relocate, from time to time, in search of better living conditions. For animals, the reasons to migrate are climatic conditions, for people, it is political and climatic conditions. What is similar between both species is that both suffer during migration owing to lack of resources.”

The poetry in Tigers in Red Weather revolves around rampant poaching, forest fires, and urbanisation. Ms Padel spent many months inside a forest in Madhya Pradesh, studying endangered tigers and their habitat. “This was my first-time inside a forest. I was with a guide and other authors. All of us knew that there were tigers inside the forest though we did not spot one. That is when I realised, the tiger defines the forest. The meaning for both my poem and that forest was the tiger living in it,” she said.

Apart from pointing out the horrors of the changing world, Ms Padel highlighted the need for conservation of biodiversity, through her poetry at a recent event in Bangalore.