Several challenges haunt the BCCI to conduct the 14th edition of the IPL amidst the fast-spreading COVID-19 pandemic in India. 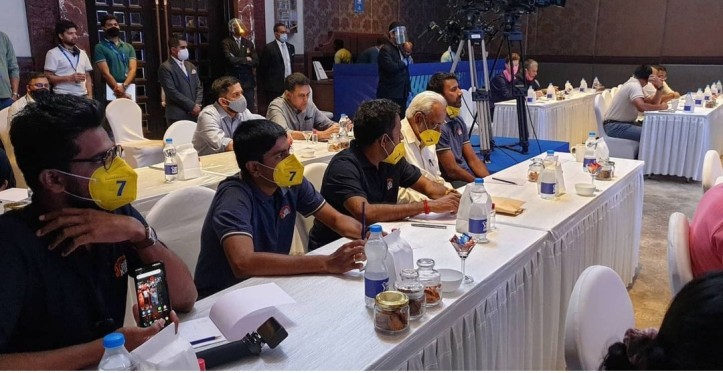 Bengaluru: The 14th edition of the Indian Premier League(IPL) which started on April 9 will go on till May 30 across six venues: Mumbai, Ahmedabad, Bengaluru, Chennai, Delhi, and Kolkata. Ahmedabad will host the playoffs as well as the final. The matches will be played behind closed doors in the initial phase of the tournament, and no team will get an opportunity to play in home conditions. The season kicked off with defending champions Mumbai Indians facing the Royal Challengers Bangalore at the MA Chidambaran stadium in Chennai. Several challenges haunt the BCCI to conduct an event of this magnitude amidst the fast-spreading COVID-19 pandemic.

A few groundsmen at the Wankhede stadium in Mumbai had tested positive for COVID-19 initially. Therefore, Hyderabad and Indore have been kept as stand-by venues. Unlike in the UAE last year, where a team got back to a fixed bio-secure zone from three venues of the tournament, each team will enter four different bubbles during this edition.

Several players had contracted the virus: RCB’s Devdutt Padikkal; Delhi Capitals’ Axar Patel; and Kolkota Knight Riders’ Nitish Rana are among those who may miss the first few games of the IPL.

Maxwell, who suffered from mental fatigue in the past, has admitted that adjusting to life amid the pandemic is taking a toll on players around the world. "It is difficult to move from one bubble to another. You will get stuck into this never-ending nightmare of living the same day again. You tend to forget how to have a normal conversation with the outside world. That can be very hard mentally and is a massive challenge. But it is great to be back playing and entertaining people,” he had said in an interview conducted by RCB on its YouTube channel.

According to the media reports, 14 members of the Four Seasons hotel, where the Star Sports World feeds its crew, have tested positive for COVID-19. They include a cameraman, producers, directors, EVS operators (people who provide slow and ultra-motion replays and instant graphics), and video editors.

The BCCI has issued COVID-19 guidelines for both the players and the staff of the IPL.

The tournament consists of 12 bio-bubbles. Among these, eight are for franchises and support staff, two for match officials and management teams, and the remaining two for broadcasters and their crew. The BCCI has appointed four security staff for each team who are the designated Bubble integrity managers. They travel with the team throughout the tournament and report any breach of protocols by the team members to the BCCI chief medical officer.

Bubble-to-bubble transfer rules apply for players as long as they are flying by chartered flights. The BCCI officials and its operations team will not be a part of any bubble and as a consequence, they will not be able to interact in person with any player, support staff, match management teams, and the broadcast crew. Families of the players are allowed to be a part of the bubbles.

Another rule is that if the cricket ball goes into the stands or outside the stadium, the 4th umpire will provide a replacement from the “library” of cricket balls. The previous ball, when returned, will be sanitized with alcohol-based wipes by the 4th umpire and will be placed in the stock. Also, the application of saliva on the ball is banned.