Of colours, crowds and camels

This fair has many surprises and the venue is getting ready to host the mega spectacle. 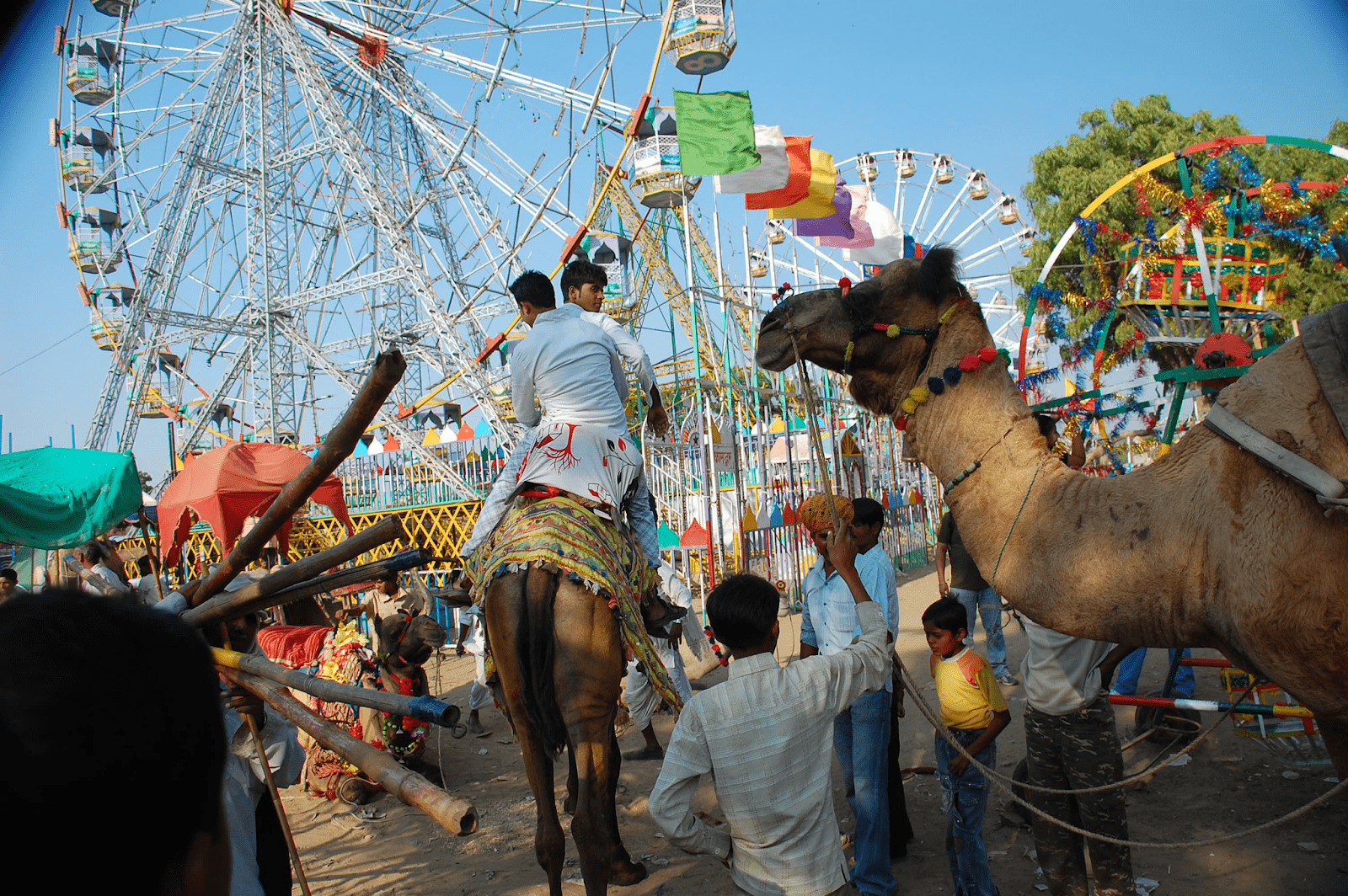 “Khamma Ghani!” Well, where are you? Yes of course in Rajasthan- the land of Maharajas and palaces and havelis and vast deserts. Amidst all this is something which stands out for its sheer size. Much before anyone thought of managing an event, this fair brought people from far and wide. This is the world's largest camel festival and the greatest fair of Rajasthan- The Pushkar Mela.

Rajasthan is replete with stories of rulers, valour, and vibrant colours. A small pilgrimage town where the colour of the desert starts to get blue with the onset of winters. The many allies, bazaars, and ghats of Pushkar welcome everyone to witness this mega spectacle. Each year over 2 lakh people take up the invitation to visit the place.

"This is the biggest international fair where the events take place mainly in three phases, the first one is the Pashu Palan that is the main Pushkar cattle fair which is for the horses, cattle and the camels. It was originally for the camels and that's why it's called Puskar camel fair. The second one is a little bit of cultural activity which goes on for 8-10 days and the last one is the religious activity which happens at the ghats wherein people take a dip in the holy Pushkar and then goes on to Brahma Mandir especially on the Kartik Poornima and as well as on the Ekadasi. says Devika Tomar, a senior official from Rajasthan government. The burst of energy, colour, and culture greets the visitors as they enter the huge mela ground. The local traders and herders with their camels and horses are the great attraction of this mela. Held in the Hindu month of Kartik, this traditional carnival brings together a variety of cattle to the mela ground. Thousands of camels are dressed up, paraded, entered into the contests to exhibit their best attributes and attitude, and traded here.

The locals here believe that in the old times, pilgrims used to come on their horses and cattle to take a dip in the holy ghat of Pushkar but later trading of these animals started and that's what gave birth to this huge fair. One of the original ideas behind the Pushkar fair was to trade local camels but the business has seen a slump in recent years. Traders say that the decline is due to the State government's policy of banning camel trade. While the trade is lucrative, some traders still support the government's policy. They agree that these animals need to be protected but on the other hand, some people believe that the trading of animals like camels is important as they need sand which is one of the important requirements for the habitation of these animals.

While the men are busy buying and selling camels on the outskirts of this mela, women on the other side come into the centre of this fair, to the marketplace where they buy and sell colourful local textiles, and also camel products to support their families. This is important because in recent years the nomadic pastoral lifestyle that they have enjoyed for hundreds of years has become harder as national parks and private property are encroaching on their grazing grounds. So they need to find their ways to supplement the income, and the only way left to do this is by selling female camels at Pushkar which they never did before. This is not a good sign as the female camels are necessary to keep the herd numbers high but hopefully, they find a way to keep this lifestyle continuing in the future. 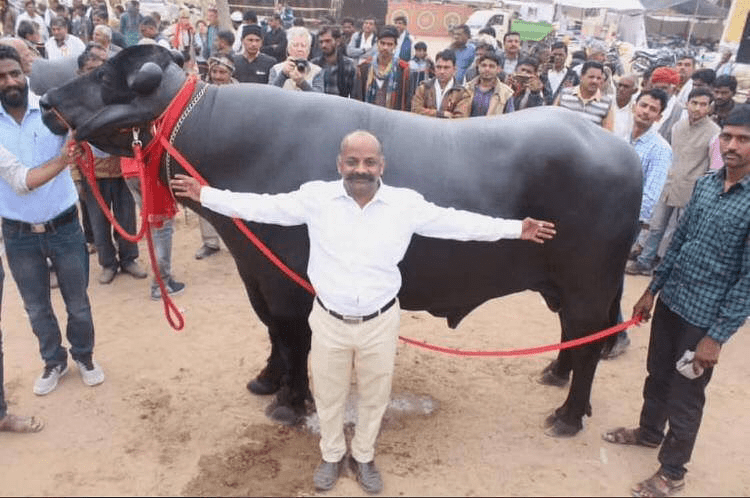 Another star attraction here is Bheem, the buffalo worth 14 crore rupees. His owner Jawahar Lal brings Bheem to educate farmers and cattle owners on how to raise their cattle. The owner has been taking care of the cattle since the buffalo was very young and now it is one of the most remarkable animals ever. The maintenance of this cattle takes around 1 lakh rupees every month as per the owner and he has been taking care of this animal for more than 6 years now. 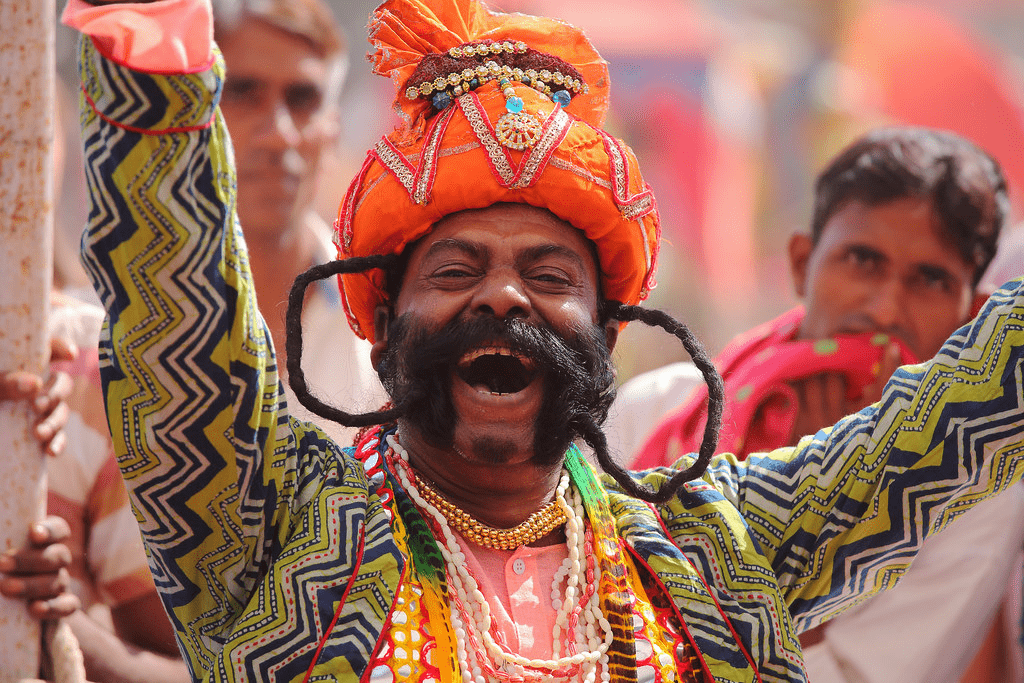 
Apart from the trade of livestock, the main attraction of this fiesta are the cultural programs, the moustache competition, and many more. The symbols of valour and courage have a special place in the fair. For instance, one of the most unique competitions held here as a part of the cultural fest is the moustache competition which is as old as the festival itself. This competition is not about who grows the longest signature of manliness rather who grooms it the best. From one spectacle to another, time never stays still at the Pushkar fair. Among other attractions of the show are the local folk dance and also the famous Ghoomar dance of Rajasthan. Not only the locals but people from across the world take part in these events. Matka races, musical chairs, and turban tying competitions attract a lot of participants, particularly foreigners. 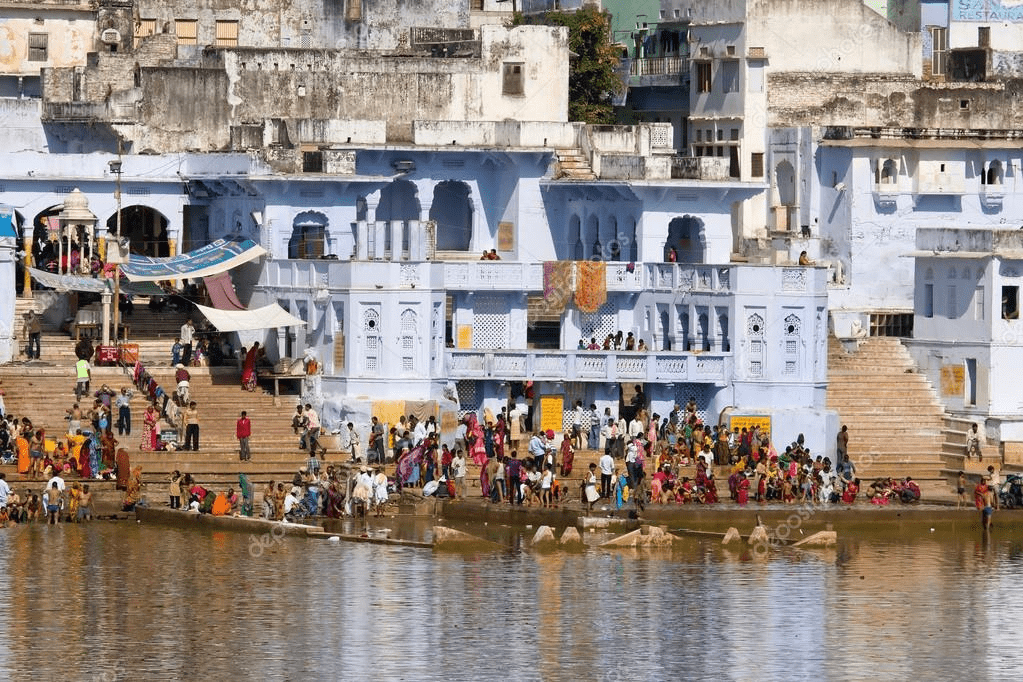 
Apart from its celebratory aspect, the Pushkar fair also possesses a religious significance. The fair is primarily celebrated to glorify the Kartik Poornima festival which takes place during the full moon day according to the Hindu Calendar in the month of Kartik. Pilgrims take a holy dip in the Pushkar lake on the auspicious occasion of Kartik Poornima and then pay homage at the Brahma Mandir, the only of its kind in the world as it is the only mandir dedicated to Lord Brahma, a Hindu deity who is the creator of all forms of life. Throughout the year, the prayers, bells, and devotional songs affirm the sacredness of Pushkar as a place and a prominent Hindu Pilgrimage town. Just a few minutes away from the temple, Brahma Sarovar brings bliss to the temple. It is believed that this lake was built by Lord Brahma when a lotus dropped from his hand and a lake emerged in that place. The holy lake has 52 bathing ghats which were mostly built during the 18th century. The oldest among them is the Brahma Ghat, Gau Ghat, and the Varaha Ghat. It is believed that on Kartik Poornima all the 330 million gods and goddesses of Hinduism assemble at Pushkar lake to purify the righteous. As a result, thousands of devotees and pilgrims come together every year to pay tribute in remembrance of the event and redeem themselves. It’s one of the top five pilgrimage sites in all of India.

Another feature of the Brahma temple are the grand aartis performed at various ghats. A grand devotional ritual, the Maha Aarti performed on the Kartik Poornima is a visually stunning display.

As the evening deepens, this grand Mela comes alive with a massive show of lights of different colours. The Pushkar Mela is a priceless treat for those who wish to soak themselves in the vibrant culture and traditions of Rajasthan. From letting the visitors appreciate the beauty of the golden sand dunes to embracing the vibes of Rajasthani culture, the fair is now a cultural landmark that has acquired its prominence.

This year the splendid fair is going to be held for nine days, from November 11- 19. It will start with the Harmony Marathon from The Dargha Sharif, Ajmer to the Brahma Temple on day one. This run is a great initiative for promoting brotherhood and celebrating the uniqueness of this incredible state. It will wind up with the Maha Aarti on the Pushkar Sarovar followed by the gleaming fireworks on the High-Level Bridge. While this fair is full of life and enthusiasm, every day has its speciality and uniqueness. As already said, the true colours of Rajasthan are depicted through this fair. Here is a quick checklist for the upcoming Pushkar Mela. 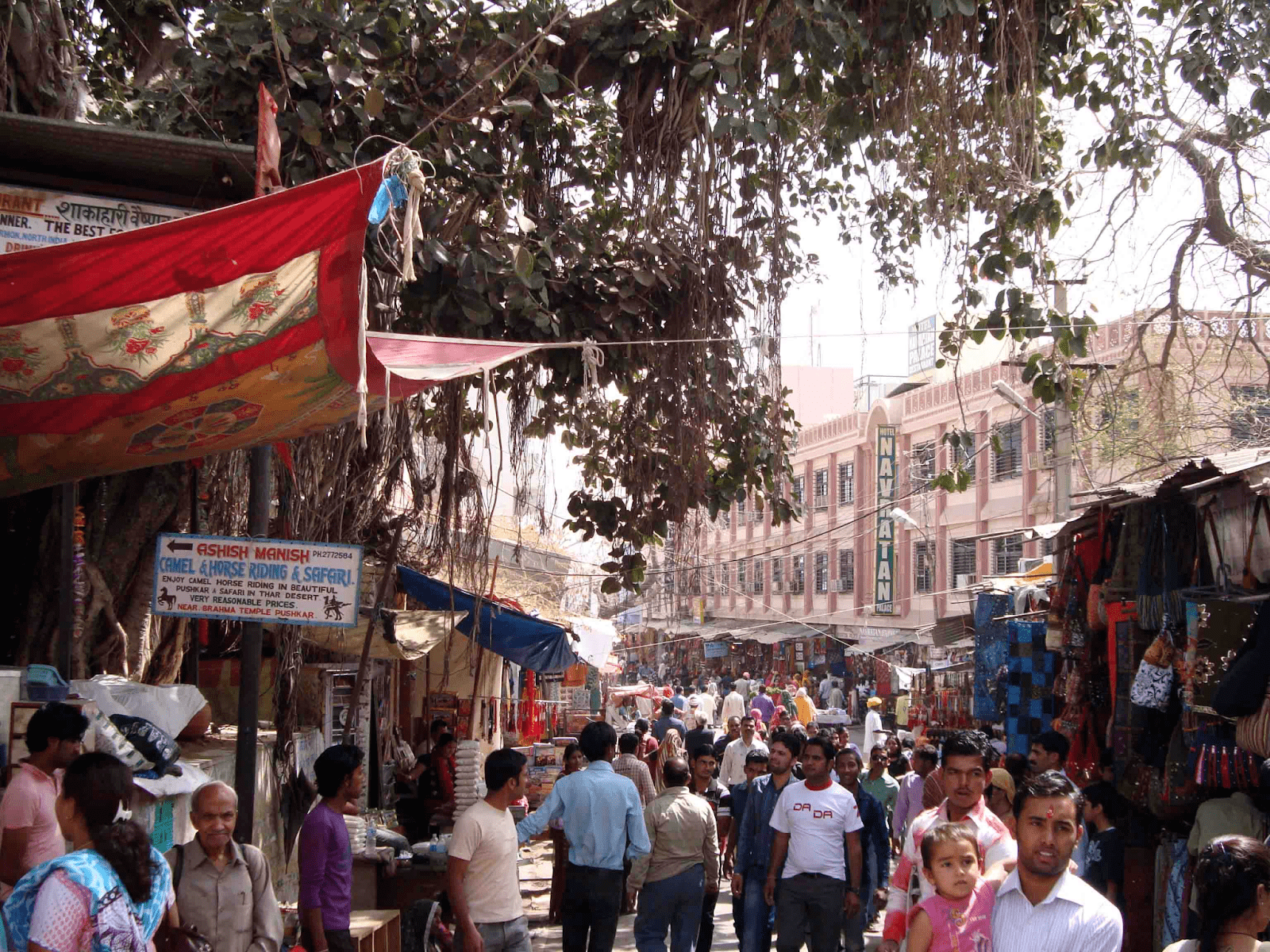 When talking about Rajasthan, one can never miss food. Apart from everything about this grand fest, food is what adds life to the Pushkar Mela. One should not forget to try the traditional and authentic Rajasthani cuisine. Even though everything in the mela might be a little on the expensive side, it is worth trying especially the local delicacies like Dal Bati Churma, Jalebi, Malpua, the very famous malai lassi, and many more. Other famous food items like teelkutta which is made out of sesame seed and also freshly prepared sesame oil, Kachoris, etc. are brought in huge quantities by the tourists even from outside India.

To wrap up, this entire festival is chaotic and insane. There are plenty of crazy things unfolding around you all the time that you don’t really get time to think about any of your stressors.

There are innumerable reasons why you should travel there at least once in your life. Next time you visit Rajasthan, make sure that your vacation days match this festival.