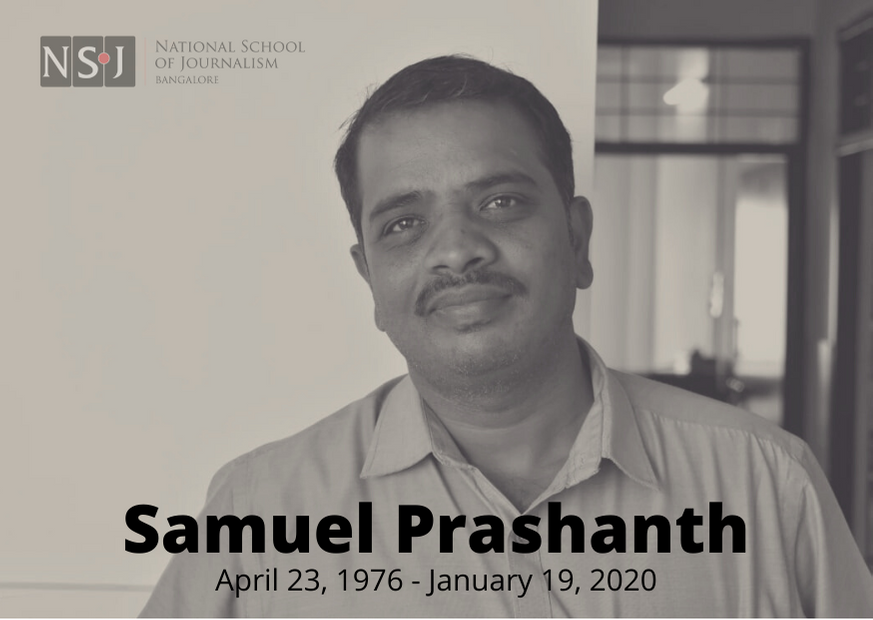 Prashanth “Anna” (older brother), as he was called by everyone at the School, was 43 years old and is survived by his wife and young daughter, Navya.

Prashanth, as anyone who has visited NSoJ would know, was a pillar of the School. He was the School’s first employee, and was in charge of just about everything. His job description included the following roles: facilities manager, accounts book-keeper, attendance recorder, time-keeper, campus security, vendor coordinator, university liaison, audio visual equipment manager, studio manager, hospitality coordinator, document archiver, bank liaison, personal assistant, expert coffee and tea maker, courier, and finally, “Big Brother” (not the same as older brother!) to everyone at NSoJ.

Prashanth, very obviously, did not work for a salary. His life was a service to the School. And he served as if NSoJ was his own. And it was.

The NSoJ family is deeply pained at his death. He is suspected of having succumbed to complications from dengue – but in keeping with his nature, he did not disclose to anyone at work that he had been suffering from a fever all through the Christmas holiday period. He called in sick a few days prior to his passing but would still show up at work, believing that being in the company of his NSoJ family would make him feel better. He never felt better though. This wasn’t an ordinary fever. He perhaps realized that when ultimately he walked into hospital a few hours before his death.

Until the end he served NSoJ well, giving his all, his life even.