“Today, India has many leaders eyeing to somehow grab power. I was born amidst power. But strangely I have no interest in it”, said Rahul Gandhi. 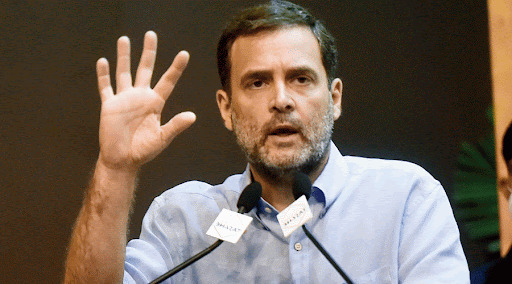 One of the foremost complaints critics have about Rahul Gandhi is his seeming lack of appetite for power and politics. Even among anti-BJP circles, he is perceived as a part-time politician who is inconsistent and fuzzy in his conviction and action.

In a time when the country urgently needs a strong and effective opposition, the de facto leader of the main opposition party time after time sends out signals of disinterestedness, irresponsibility, and ineptitude.

Speaking at the launch of the book ‘The Dalit Truth’, the Congress MP conceded that though he was born and brought up amidst power, he had little interest in it.

Possibly a manifestation of this lack of political canniness, the 51-year-old Member of Parliament from Wynad has often, like his sister and party general secretary Priyanka Vadra, appeared not much worried about an exodus from his party, which to date remains unchecked. On the contrary, he has engaged in calling out their “opportunism” and “lack of willingness” to fight a long-drawn battle. Mr. Gandhi has gone to the extent of characterising them as ‘scared’ of law enforcement agencies.

What the former Congress President doesn’t even attempt to understand is that netas are for power as power is essentially for netas. Their existence, aura, clout, and everything else one can associate with the force of power stands suspended when not in power. Therefore, a prolonged suspension is likely to erode them sooner than later, since a Dave, Chaturvedi, Patil, or Sharma does not promise a dissimilar degree of all-weather political weight that a Gandhi surname guarantees. If not, what else explains the massive crowd that Rahul Gandhi or Sonia Gandhi can pull any day in any corner of the country, even though that hardly translates into votes.

Shakespeare once famously asked- ‘What’s in a name?’

Well, the ‘Gandhi’ surname is a magnet on its own.

It is probable that he believes the heft of his surname will one day bring people fed up with the current dispensation towards him. Otherwise, there is little exposition to his unworried and amateurish political practices.

What he must be told is his impractically idealistic talks cannot and should never be a substitute for a hard-headed endeavour of politics. Since Congress is a political party, not an NGO- as he may have mistaken it to be.

Neither will make way

Reports of him cobbling together political strategist Prashant Kishor and a local heavyweight to boost the party’s prospects in Gujarat are gaining ground. Again, in what capacity, is the foremost question.

One cannot spin these developments in Rahul’s favour because there are confirmed reports of him leaving the country soon to an unknown place for unknown reasons, at a time when his party has undergone a shocking drubbing in polls and has been reduced to ruling just two states on its own, which is dismayingly at par with the new kid on the block- the Aam Aadmi Party.

All these in the context of ‘not interested in power’ are distressing for anyone hoping for the grand old party’s revival because he doesn’t even show signs of stepping aside.

Interestingly, in his speech, he mentioned atrocities on Dalits, the broken social fabric of the country, and, notably, RSS capturing institutions. But how can a lieutenant, who has convinced his soldiers of the gravity of the threat, express disinterest to fight the battle? Does the lieutenant believe that mimicking a Love guru who keeps talking of Pyaar and Mohabbat is all the medication a country slipping into dangerous communalism needs? How and what does he envisage to protect and empower Dalits without political power? Can he free the institutions ‘invaded by fascists’ by delivering sermons? World history is replete with examples of interest groups or a movement taking a political plunge to effect substantial changes. Changes are hard to come by unless armed with political authority. The Gandhi scion seems to hark back to doing ‘morchebaazi’ at the cost of hard-boiled politics.

The paradox in Rahul Gandhi promising to protect a ‘Tamil culture’ while he is still ‘trying to understand it’ is spectacularly staggering. He said he is also trying to understand the problems and sufferings of Dalits. Understanding - even after these many years in politics. Remarkably, it is possible that only a Gandhi surname can offer you a sabbatical of this kind to pursue ‘understanding’ till eternity.

The fact of the matter remains that his delusional talks amount to nothing as the country continues to suffer while waiting for Rahul Gandhi to finally ‘understand’.