Need for reading the subtexts

If read between the lines, the Pew report doesn't reflect India as a non-discriminatory and pluralist boat sailing smoothly. 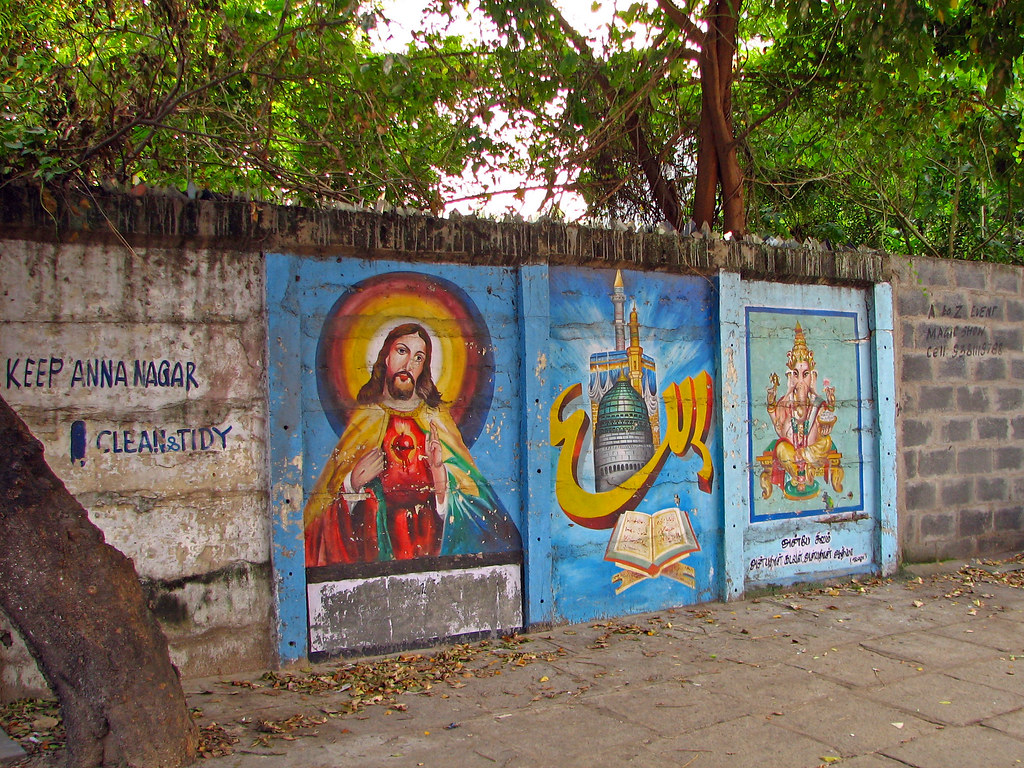 That India is a deeply religious and starkly segmented country is not a revelation. This disunion, which is immense and deep-seated, lies right beneath the facade of unity. These complexities and commonalities in the socio-religious life of Indians just got reacknowledged and freshly quantified.

'Religion and India: Tolerance and Segmentation' titled report was released by the Pew Research Centre. The interpretations of the data from various quarters uniformly suggest that Indians irrespective of their religion are more or less religious and see themselves as fairly tolerant of their compatriots from other religions. 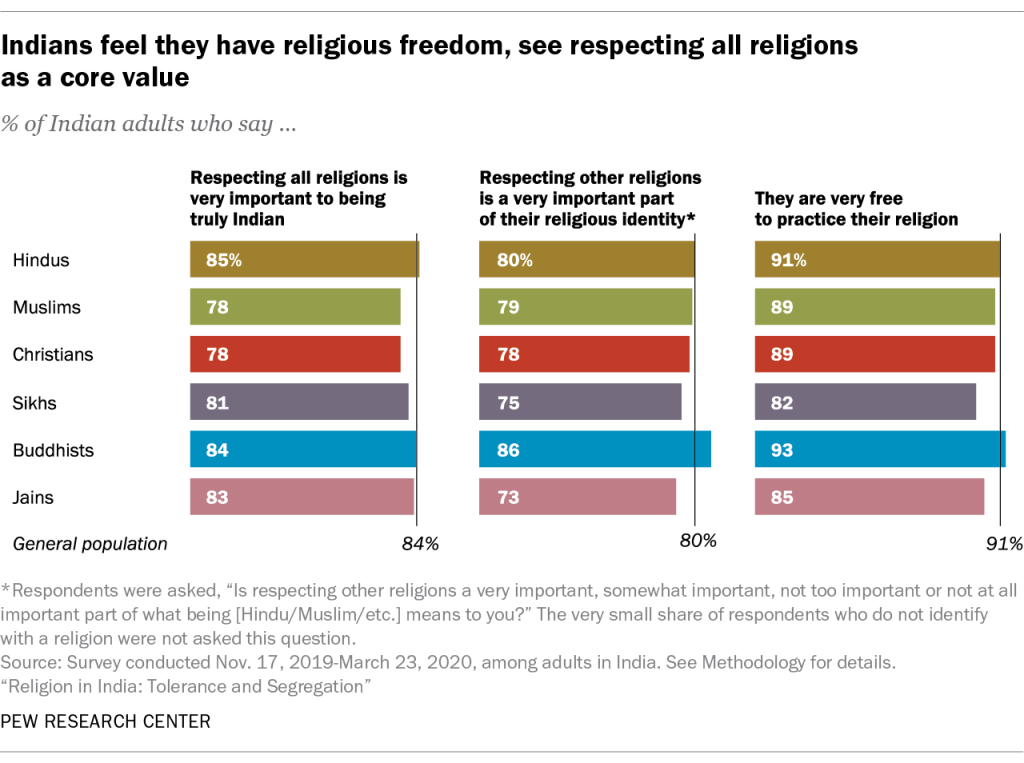 The findings also reveal that most Indians are deeply patriotic, united against inter-caste and inter-religious marriage, and less than 1% of Indians are converted with Hindus, importantly, gaining as much as losing. Also eating beef and pork makes you ineligible for being called 'true' Hindu and Muslim, respectively, by two-thirds of the respondents. Predictably, the findings relieved and disappointed some, depending upon their ideological divide.

However, there are shortcomings on the part of some of these statistics as well as a layman's comprehension of the same.

For instance, to quote the research in their own exact words: "Indians see religious tolerance as a central part of who they are as a nation. Across the major religious groups, most people say it is very important to respect all religions to be 'truly Indian. And tolerance is a religious as well as civic value. Indians are united in the view that respecting other religions is a very important part of what it means to be a member of their own religious community".

However, there are a few visible inconsistencies caused by the marked deviations in responses from the same respondents to some other intrinsic questions. Consider the uniformly prevalent objection to marriages outside their community and that of a large majority (70%) of Indians admitting all of their close friends share their caste. Significantly, in what is an ominous signal of contemporary politics, two-thirds (64%) of Hindus associate national identity closely with Hindi and Hinduism. 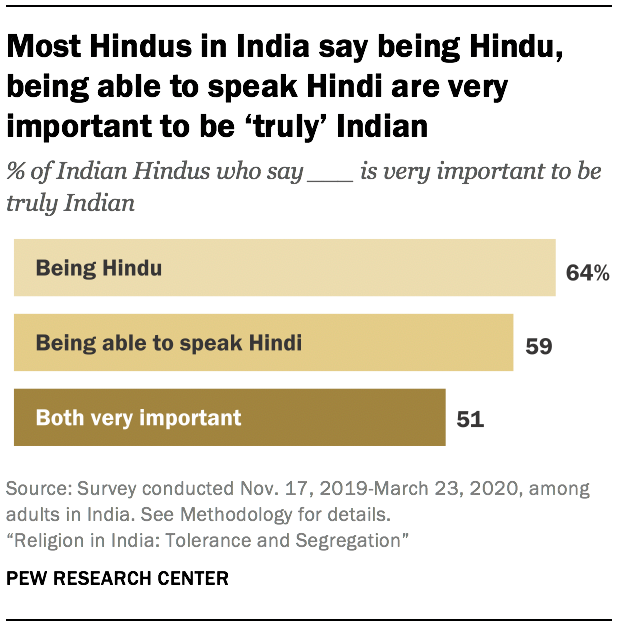 Thus the mind begs a question, what do Indians exactly mean when they call themselves 'tolerant'?

Is their definition of tolerance inextricably linked to terms & conditions? Does their definition carry certain caveats? Let's be honest, the answer is a big yes. Tolerance in Indians is restricted to only such situations where 'others' don't intermingle, keep living a segregated life and adhere to socially demarcated boundaries of one's livelihood.

Academician and columnist Pratap Bhanu Mehta theorizes this to the concept of "segmented toleration". According to him, each community has its place as long as they stay in their place.

Any non-adherence to the accepted norms could trigger unwanted consequences. Such stratification often does not bode well for the marginalised and vulnerable in case of any breach of agreed caveats to the idea of tolerance.

The fact that every two out of the three (65%) respondents were of the view that communal violence happens to be a major issue of concern only bolsters my scepticism of the real picture behind the sizeable percentage of Hindus (85%) and Muslims (78%) conforming reverence for other faiths and its followers. This number to a great extent conceals the truth. The registered response, for many, appears to be a cautious exercise making peace with the historically accepted, adhered and progressive position of respecting religions. Deviating from these sets of standards publicly still seems for many as an act of fringe, which they are not yet comfortable to be identified with. And this in all likelihood is the best-case scenario emerging from this.

Social identity
This can also be understood by bringing into context the fact that an overwhelming number of Indians in the survey cut across the divisions, feel it is inappropriate to marry outside their own caste and religion. That this is the widely prevalent historic community practice, doesn't cause any hesitation or embarrassment while vouching for it, publicly.

Another eyebrow-raising point in the survey report is the surprisingly low numbers of backward castes, Dalits and Muslims accepting about 'a lot of discrimination,' which seems to be harmonizing with the views of usual suspects- the upper castes. Only 27% of SCs and 18% of OBCs feel discriminated against. Also astonishing is that a not so large number (24%) of Muslims complain of prejudicial and unfair treatment.

Does this mean India isn't as discriminatory to the extent talked about? Does this mean the annually soaring cases of violence against Dalits are hype? Are frequent reports of prejudice and unfairness coming from quarters like workplaces and educational institutes blown out of proportion? Are sudden jumps in cases of targeted mob-lynchings, biased presumptions emanating from 'anti-Romeo and 'love jihad' like enactments not a cause of concern for Muslims? Don't massive protests occurring in nearly every part of the country, which was the same time period when the survey was conducted, against the CAA & NRC count as unjust and discriminatory?

Segmentation
The answer to these questions lies within the same reality of segmentation. Inclusivity is a far-fetched dream. Homogeneity limits the scope for discrimination. There can't be any concept of discrimination in a homogeneous society. And to constitute a heterogeneous set-up, acting to achieve fair representation and disincentivizing exclusivity is the key. As of now, Dalits and Muslims have a negligible presence in the mainstream or say institutionalized workforce.

Though some credit to the above numbers can be ascribed to how the question was phrased. Question number eleven quizzes respondents: "Is there a lot of discrimination against ____ ?". The blank space is blocked by religious communities in follow-up queries. Arguably this cannot be the best way to capture the real picture as the question is too broad and subjective. A pin-pointed question resonating with life experiences like- "Did you face casteist commentary in your educational institute after qualifying through the quota system? Did you, as a Muslim, experience discrimination from landlords while looking for accomodation? Did you hear anybody passing off your caste name as abuse to somebody or yourself ?" - could have elicited a more considerate reaction.

One more observation from the survey that delighted right-wingers as well as commentators was the overwhelming choice of people across faith to live in homogenous societies. Something very widespread.

Half-truth
This ubiquitous preference for ghettoization warrants critical thinking. The way a conservative interpretation paints this fact is ignorant, if not mischievous. India in its indefinite fragmentation over various lines smacks of entrenched social and economic disparity. To call it purely a choice and an action by discretion is a half-truth. A decision to live in the same socio-economic strata cannot be clubbed with a decision to live in a 'feels safe' segment. The first is brimming with the feeling of superiority and dominance while the second is a proactive or a reactionary result of insecurity and vulnerability. Hence, any attempt to draw parallels with respect to both the above scenarios undermine the agony of some while legitimizing the undue privilege of some.

To sum up, the Pew report, if read rightly, doesn't reflect India as a non-discriminatory and pluralist boat sailing smoothly. Rather a society, in essence, inhabiting stratification and discrimination.