How do we navigate the intersection of politics and social media? 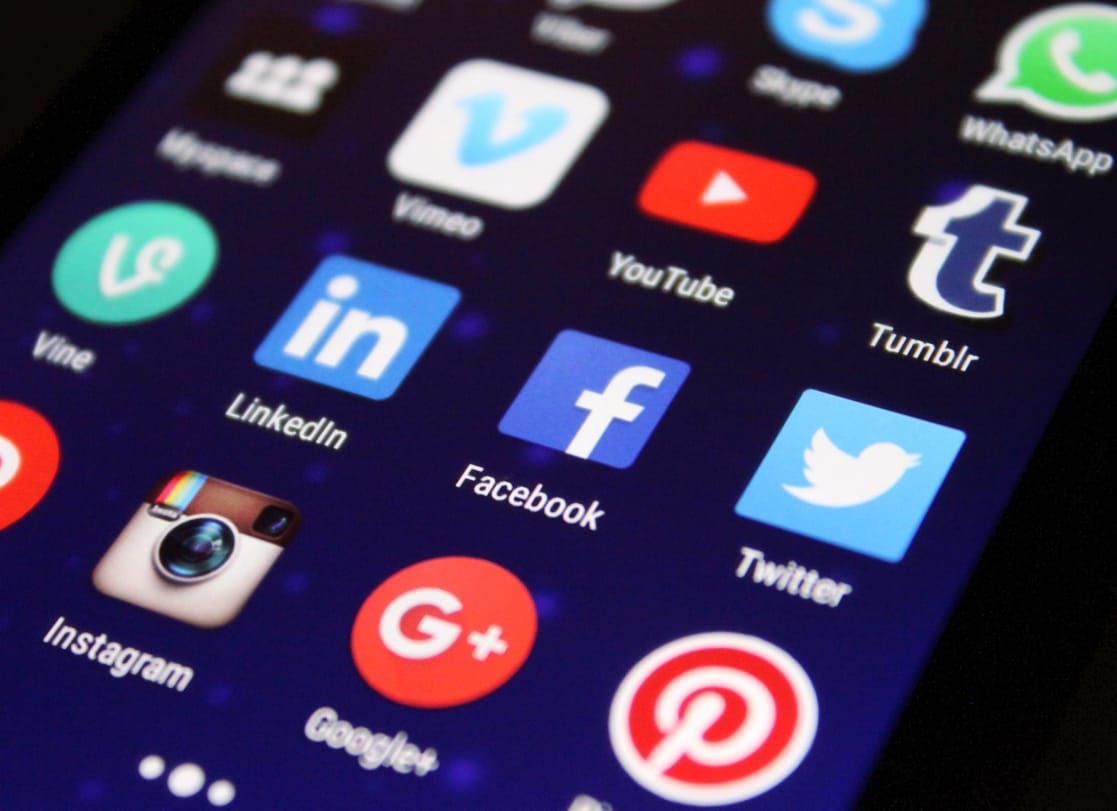 Twenty years ago, the concept of reaching millions with the click of a button on an electronic device the size of your palm would’ve been hilarious. Delusional, and hilarious. The emergence of the internet and social media has made resources and information more accessible. The advancement in technology and trade is impressive. Yet, we’ve created a network far greater and more powerful than we could’ve imagined- a network that wields more power than it should.

Social media, a tool meant for communication, has emerged as one of the most powerful economic and social pillars of modern society.

Where do people go for information?
Before social media, everything came at a cost. From consuming news from newspapers and advertising using traditional business models, companies like Facebook, YouTube, etc, have disrupted what was once considered the norm. Controlling the distribution of content and advertisements, they capitalize on what societies need to access information in the blink of an eye.

According to leading American research firm, Pew Research Center, 53% of Americans consumed news from social media in 2020. Information on social media can never be fully trusted. Apart from this, the lack of transparency in social media and search engine’s algorithms is a major red flag.

Often curated to reinforce pre-existing biases, the news consumed on social media is tailored to satiate an individual’s political, social or social preferences and beliefs. In 2016, Facebook faced heavy backlash for manipulating the news feeds of its users. Defending themselves, the social media giant explained how our activity- including our likes and connections make their way to the algorithm that determines the type of content we’re being fed.

The Intersection of Politics and Social Media
The crossroads at which politics and social media meet is most often an unpleasant environment at best and a war zone at worst.

Sharing ‘fake news’ wouldn’t have been an issue if social media platforms were isolated. The creation of a political ecosystem that connects a larger network ensures that the aforementioned fake news does not stay enclosed within the circle of an individual’s audience or followers. This results in misinformation, fake news going viral, trolling and intense polarization.

Second, political campaigns are no longer confined to rallies and big speeches in sports arenas. The social media presence of political parties and leaders is a new level of extending influence. Most importantly, the personal opinions and discourse of politicians on social media- away from stuffy, media-trained press conferences- not only affects voters but also garners attention and tips the reach of the election campaign in their favour. 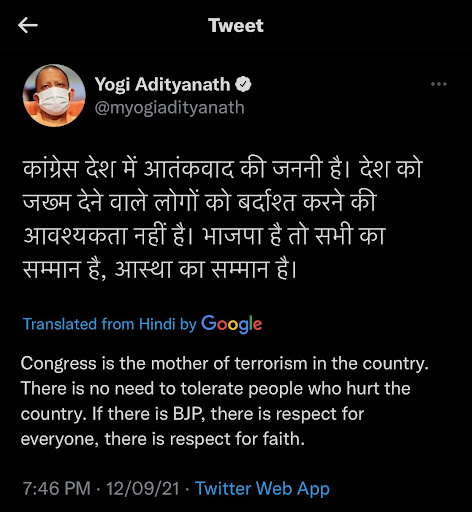 Social Media and Political Bias
Earlier this year, Congress leader Rahul Gandhi posted a video condemning Twitter for locking his account. Twitter also locked the accounts of several Congress leaders for violating its policy. “This is an attack on the democratic structure of the country. This is not an attack on Rahul Gandhi,” he said.

Rahul Gandhi tweeted a picture of the parents of the nine-year-old Dalit girl who allegedly was brutally raped and murdered by a Hindu priest, after he had met them on August 4, 2021. India's child rights body demanded that the photograph be removed from the platform because it revealed the identity of the rape victim.

Speaking to the BBC, Congress spokesperson Randeep Singh Surjewala argued that the law only requires that the photo of the victim or the details of the family must not be put out, and they had done neither

Calling Twitter a biased platform because of its lack of neutrality and objectivity he said, “By shutting down my Twitter handle, they are interfering in our political process . . . I have 19-20 million followers. You are trying to deny them a right to an opinion. Are we going to allow companies, just because they are beholden to the government of India to define our politics for us?”

In 2019, the Parliament of India passed the Citizenship Amendment Act. This act provided Indian citizenship for religious minorities including Hindus, Sikhs, Buddhists, Parsis, Jains and Christians from Bangladesh, Afghanistan and Pakistan. The law excluded Muslims from these countries. Alongside this, many feared that through the National Register of Citizens, many Muslim citizens in India would be rendered stateless if they were unable to provide the stringent identity proof requirements that were enforced. 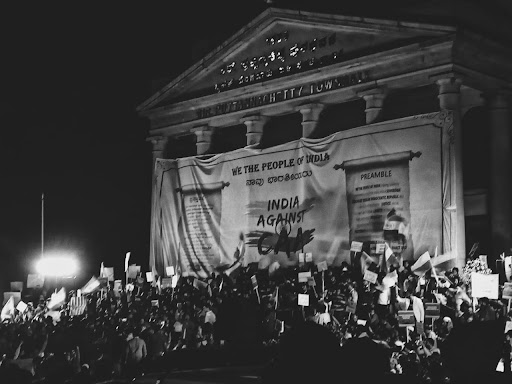 Activists and citizens who took to social media in protest against the bill received requests asking them to take down their tweets. In Delhi, activists Safoora Zargar, Natasha NArwal and Devangana Kalita were arrested. Following their arrest, posters that called for a protest against their arrest were circulated on Twitter. The posters, which were circulated under the hashtag sabyaadrakhajayega (everything will be remembered) were deleted because of a legal removal demand issued by the authorities.

The division visible on the platform, especially in relation to matters involving members from the opposition is staggering. Division among users because of their political standing leads to rapidly escalating tension.

Twitter: The Outrage Outlet
The prospect of having a neutral platform that encourages diverse views and opinions may have worked in a utopian society. Social media could’ve democratized political discourses.

“Social media needs money and engagement. If you like posts, say, about feminism or interact with accounts or individuals with the same beliefs, engaging and sharing your beliefs evolves into an echo chamber where others now interact and agree with you. There is no scope for civil argument or debate,” believes Anudeep, an active advocate of social issues on social media.

Hate speech is particularly common on social media. The lack of consequences with the exception of a paltry temporary ban in a few cases, breeds users who recklessly use their words against those who disagree with them. 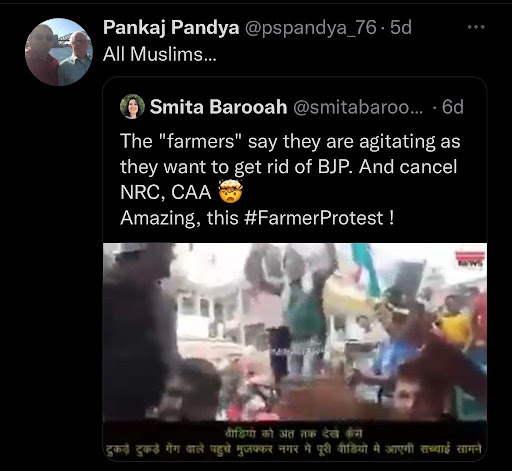 The conversion of a communication tool to an outrage outlet in the last decade is blatantly visible.

“We are now immersed in a cycle of conflicts about trivial things,” says Jonathan Haidt, American social psychologist and author of Why Do They Vote That Way, among other books, in an interview with Amanpour and Company (a late-night public affairs series featuring leaders and cultural influencers) speaking about how Social Media drives polarization.

Where does that leave us?
The ability to disagree agreeably is a foreign concept, especially on social media. Interactions with people you may never hear from again, people with fake names and identities creates temporary relationships with no future- unlike human relationships. This means that our interactions don’t necessarily classify as real communication.

While there are discussions that sometimes bear fruit, moral grandstanding is the most prevalent behaviour where one individual is using the other to show off the commitment they have towards their political standing- taking attention away from the issues at hand.

❝We’ve got to figure out how to encourage what we call a speak-up culture, without moving all the way to what’s a call-out culture, in which we’re all afraid of each other in which anything that we say can be taken, distorted and made to shame us.❞ Jonathan Haidt, American psychologist and author

Social Media facilitates interactions between like-minded individuals. This creates division. The lack of discourse among people with different political ideologies and opinions pushes them further apart.

The idea behind social media was for it to be a tool of communication. But can we count our sad excuse of a system of interaction as communication?

According to Haidt, we must make some systemic changes. “We’ve got to figure out how to encourage what we call a speak-up culture, without moving all the way to what's a call-out culture, in which we’re all afraid of each other in which anything that we say can be taken, distorted and made to shame us,” he adds.