The ‘population control programme’ can boomerang on its proponents. 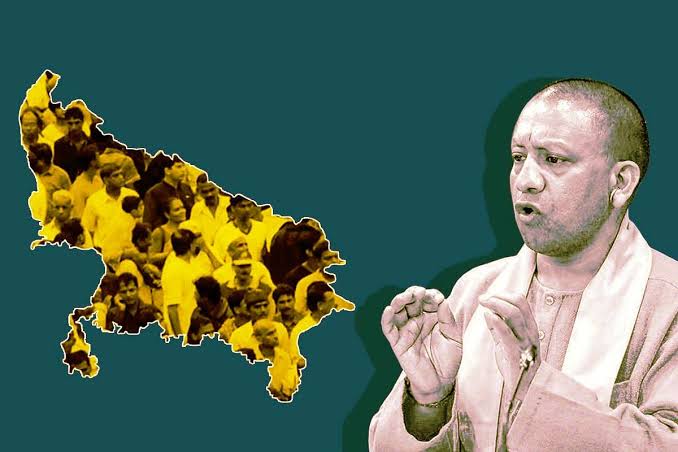 After taking a cue from his Assam counterpart's communal take on Assam's population, UP Chief Minister Yogi Adityanath took a quick step with a new population control policy that aims to restrict couples from having not more than two children i.e, a two-child policy.

"Controlling" the population and talks around it have always been there in our civic discourse. However, any coercive approach to the same has been disputed owing to some international and emergency era experiences. In addition, the country's TFR (total fertility rate), currently 2.2, has almost reached the replacement rate (2.1). In fact, 19 of the 22 states surveyed under the National Family Health Survey (NFHS) -5 have already attained a TFR equal to or lower than the replacement rate. It is the underdeveloped states like UP, Bihar, MP, Rajasthan, etc. which are struggling on key socio-economic parameters that have been pulling down the broader national scenario on TFR. However, the usual 'laggards' are catching up lately. Consider UP which brought down its fertility rate from 4.82 in 1993 to 2.7 in 2016, as per govt data. According to a report by the leading medical journal The Lancet, India's population growth would peak around 2047 and then come down to 1 billion by the end of the century. Clearly, the dystopian imagery of "population explosion" is being overplayed.

Eventful day
The draft policy was released on a carefully scheduled day of World Population Day observed on the 11th of July every year. Apart from provisions like granting income tax rebates, preference in promotions, additional increments, etc. the policy, more importantly, promises to bar individuals with more than two kids from contesting local body elections, applying for government jobs, deny subsidies and limit ration schemes to 4 members per family only.

The newly stitched 40-page policy on the population in UP is meant for the next 10 years and will come into effect a year after being officially notified. The penurious state which was anyways projected to witness a TFR of 2.1 by 2025, wants to reduce it to 1.9 by 2030. The raison d'etre is to awaken to the snowballing concerns regarding 'shrinking resources' and soaring population. Having said that, UP is not the first state to adopt population control policies. Several states like Gujarat, Bihar, Assam, Odisha among others do have their own, but very identical, population policies. What makes UP stand apart is the encompassing coverage and tough provisions for those failing to comply.

Neighbour’s envy?
The policy, reminiscent of the one by China, lays emphasis on punitive actions is somewhat a cause for concern. To tempt (read coerce) couples to have not more than two babies in a society unabashedly displaying strong-son preference could have dangerous and regressive unintended consequences. An unwanted future social condition like a skewed sex ratio among newborns is reasonably expectable. News website IndiaSpend quotes Anjani Kumar Singh, a programme manager with a Lucknow-based organisation working for women and child health, to aptly explain the implications of son-preference in the context of a fixed child norm. "We have seen on the ground, and the data also proves, that for the first child the sex ratio is not too bad but it is very bad for the second or third child."

The provisions have the potential to encourage sex-selective abortions as well as female infanticide. In a patriarchal society that still holds the mother 'responsible' for the kid's gender, contrary to the established theory of biological sciences, a breach of the new rules could increasingly hamper a woman's livelihood. The above-listed problems are deeply disconcerting when placed in a real-world scenario, here Uttar Pradesh. With health facilities being remarkably substandard and the practice of dowry still perversely prevalent, when clubbed together, both these conditions could act as an agent fuelling more unsafe abortions aiming to avoid giving birth to a girl child in a poor state like UP.

Hapless women
Women rights activists are also concerned regarding abandoning the wife or the extra kid by men in order to avoid getting disqualified for contesting Panchayat elections. What we see is that the soon-to-be-notified population control policy has the potential to disproportionately affect the lives of women.

Another provision in the policy prohibits one having more than two children from applying for govt jobs. To be very frank this won't have a big bearing on most of the (govt) job-seekers since marriage and kids follow after employment and not vice versa. However, this could shut the doors for Dalits and also women across sections, since they often enter the competitive job sphere after a delay owing to various socio-economic reasons. This provision endangers many SC& ST aspirant's dreams for a govt job as it negates the age relaxations granted to them in various competitive exams by the government itself (through other policy mechanisms).

Lack of choice
Its implications are also likely to be grave for poor families. Historically they have had large families going by the belief of 'more working hands'. Though this theory doesn't enjoy the same relevance in contemporary times, India's prolonged economic downturn and stunning devastation unleashed by pandemic-induced lockdowns could revitalize the age-old thinking. Unawareness and unavailability of contraceptives and family planning measures don't help either.

It is true that some communities (like SCs, STs, and Muslims) have had a greater fertility rate among them. Apart from the obvious answers like lack of education, poverty, unawareness, etc., Sociology offers us another interpretation for the same. To put it precisely, a 'sense of security is also a determinant for the population. A safe & secure community nurtures developmental aspirations rather than being worried and caged due to insecurity. It is for Adityanath and his regime to answer how safe does Dalits and Muslims feel in his UP.

Having elaborated on an uneasy path that UP's policy needs to trek, it is worth noting that states like Kerala, Karnataka, and Tamil Nadu have registered a drastic drop in fertility rates without any such policy in place.

A similar and firm position has been maintained by the Government. of India too. In an affidavit filed in Supreme Court in December 2020, as a respondent to a plea on population, said it was "unequivocally" against forcing people to have only a certain number of kids as an attempt to control the population. It cited family welfare programmes and "international experiences" of coercive policies leading to demographic distortions to strengthen its arguments.

Prime Minister Modi has time and again at various events spoken positively about 'demographic dividend' right since coming to power. So why are his party man and Chief Minister insisting on such stringent steps? The answer lies in the rightly suspected Politics.

Here, I list three incentives for Adityanath to pursue this:

Reclaiming Narrative
The issue and talks around that immediately serve to deflect the narrative. The harrowing spectacle of bloated bodies floating across the swathes of river Ganges, inconsolable cries and frantic calls, total apathy at hospitals have played a massive spoiler in the perception battle for the CM who had carefully crafted his image of an able administrator. Back-breaking inflation and unsustainable level of unemployment with a bleak economic future only exacerbate the electoral prospects for the saffron party. And that the state is slated to go for polls in a span of few months leaves Yogi with a very little window to counter the narrative with anything concrete. "Population explosion" and "shrinking resources" assuage the anger of the electorate to an extent. What could he do, the population is so much!

This also qualifies as a well-led trap for opposition to fall into. Support or oppose (on grounds of alleged communal intentions), it's a win-win situation for Adityanath since discussions fall into his demarcated pit.

Owaisi- the chosen opponent
There is a sudden spurt in alleged terror plots being busted in UP. Organised mass conversion rackets too have been getting 'exposed'. All of this isn't routine. That is a bid to communalise the political atmosphere as the so-called nexuses are getting 'uncovered' is a formidable probability.

With the new population rules seeing the daylight, obvious opposition to it by some political quarters fanning communal discussions is discernible. Consistent Islamophobic rants and rampant perceptions like "hum paanch, hamare pacchees", be it true or false, in the general masses provides fertile ground.

Even Yogi Adityanath has stated in his interviews about "maintaining demographic balance" - ye prayas bhi kiya jayega ki vibhin samudayon ke madhya jansankhya ka santulan bana rahe - as another big objective of the new policy. This asserted point is self-revealing in this context. As recent as 21st July, RSS sarsanghchalak Mohan Bhagwat said: "There has been an organised attempt to increase the Muslim population since the 1930s, with a motive of establishing their dominance and make this country Pakistan".

Amidst all these developments, Owaisi and his party have plunged into UP's political landscape. After Owaisi categorically revealed his resolve to stop Yogi from taking on the reign for the consecutive time, the CM welcomed his challenge and held him high as "bade neta". Considering that he has avoided taking names of his prime challengers like Akhilesh Yadav in his interviews, this was a surprising acknowledgement as well as acceptance of "challenge" from "Owaisi ji".

What all of this indicates, in cricketing parlance, is that Yogi has himself prepared the pitch as well as has chosen the batsman that he wants to bowl to.

Say no to Mandal
The motive behind avoiding demographic imbalance also implies to the Hindu society. Hindutva manifests itself at its best when caste and its controversies are kept at abeyance.

Statistics suggest backward and marginalised communities have traditionally been on the side of higher TFR when compared to Savarna Hindus. This when conflated with sporadic demands of several backward castes asking for reservations in recent years and (caste-based) socialist parties like SP, RJD, JDU firmly insisting on full disclosure of socio-economic caste census data (2015), is a sword dangling over BJP's head. And though these communities are witnessing a decline in their fertility rate, the exaction expressed is to immediately arrest the increase by threats like withholding promotions or disqualifying for subsidies and benefits.

The gross under-representation of bahujans in education and employment and providing them with 'justified' opportunities to uplift their status is a political pitch where the Hindutva party is understandably uncomfortable. Electorally too Modi-Shah juggernaut had to face hiccups when pitched against the undying issue of social justice. In the battle of 'Mandal' and 'kamandal', it is the latter who more often than not ends up being trumped.

So, safe to say, Yogi Adityanath stands out in his electoral vision.

Post-script: On the question of the constitutional validity of the policy, BJP draws attention to the directive principles of the constitution which asks the state to endeavour to control the population. However, 39B of the same constitution directs the state for positive obligations towards ensuring no concentration of wealth. The 2019 Oxfam report revealed 73% of India's wealth was in the hands of the top 1% of Indians. The real problem seems to be inequality and wealth convergence, and not 'shrinking resources'.