Metro work caught in the crossfire

Political rivalry between the Shiv Sena and the Bhartiya Janata Party (BJP) has been playing a defining role in stagnating the metro car-shed's construction work. 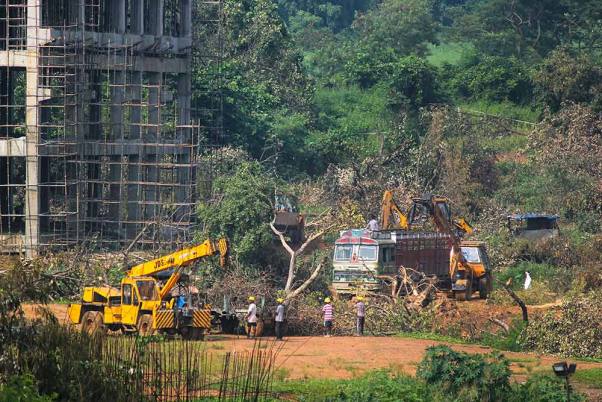 The Metro project in Maharashtra is caught in the crossfire of the State government and the Centre. The underground metro 3, connecting Colaba-Bandra-Santacruz Electronic Export Processing Zone car-shed's ongoing construction in Aarey was stopped by Chief Minister Uddhav Thackeray immediately after assuming his post. The new proposed land in Kanjurmarg, by the state government, is stuck in a controversy as the Union government claims its ownership. Political rivalry between the Shiv Sena and the Bhartiya Janata Party (BJP) has been playing a defining role in stagnating the car-shed's construction work.

It all dates back to the time when the Shiv Sena was playing a dual role of a ruling party and the opposition in the state. The Shiv Sena's opposition to the deforestation and construction of metro car-shed in Aarey was loud and clear. But the coalition partner, BJP, ignored its ally and axed more than 2000 trees in 24 hours. The outbreak of the event brought activists and citizens to the streets, protesting against the government. Yuva Sena leader Aditya Thackeray criticised the action saying: "It is a shameful and disgusting act which was carried out in the cover of night." The activists knocked at the Supreme Court's door resulting in a temporary stay. The government clarified that it had already cut down trees it needed. Eventually, the stay was repealed.

In November 2019, after the Vidhan Sabha elections, the dynamics of Maharashtra politics drastically changed and the mighty BJP was forced to occupy the Opposition benches. The new Chief Minister, Mr Uddhav Thackeray, stopped the ongoing car-shed's construction. This move was criticised by the Opposition stating that it was a financial loss. The Thackeray government shifted the metro car-shed to Kanjurmarg, an eastern suburb. The 102-acre land was handed over to Mumbai Metropolitan Region Development Authority (MMRDA) on October 6, 2020. The government defended its decision stating that it had allotted the land at zero cost, and car-sheds for lines three, four, and six could be constructed at one place. It even included a stabling line, a place for parking and maintenance, which was excluded in the original project. Recently, the Union government jumped into the matter claiming that the land was an erstwhile salt-pan land that belonged to it. A private builder, Garodia, too has claimed the ownership of the land. Thus, the Bombay High Court has ordered a stay.

Both the parties have their calculations. Former Chief Minister and BJP leader Fadnavis claims that the shifting of the car-shed would lead to an additional expenditure of Rs. 5,000 crore, while Mr Aditya Thackeray stresses that the land is crucial for metro line three, four, six, and 14 which would save Rs. 5,500 crore. Currently this 'no man's land' has become the battleground for the BJP and the Shiv Sena.