Medical Misinformation On The Rise 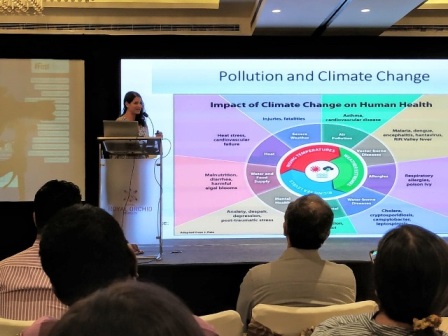 By Nishi Trivedi and Mahadevan K.V

Bangalore: Do you have a headache? Have you googled your symptoms?

You probably have a brain tumour or something equally terrifying. That is the answer you get when you depend on “Dr. Google” instead of visiting a doctor.

This was the theme of a workshop on medical misinformation and the role of media and medical professionals, held here recently. The event focused on breaking several myths relating to medical issues, even something as seemingly simple as a headache. To make the sessions understandable to the largely layman-audience, the participating doctors broke down medical jargon. What’s more, they chose to use anecdotes to explain different concepts.

Tanya Spisbah, director at Australia India Institute, a think tank that looks at collaborative work, spoke about  ‘Misinformation and Global Health’. “Deliberately misleading messages are something we need to be highly vigilant about,” she stressed. Further, she said that the next world war would be fought using  pathogens (bacteria and viruses) and not guns. Mental health is not given priority in India, Ms. Spisbah said, adding that a large number of sufferers do not get the required treatment relating to mental health.

The panel discussion that followed looked at ‘Medical Fake News: Sources and Narratives’. The doctors on the panel  spoke about their battle against the misinformation available on the Internet. “The Internet has led to loss of faith in doctors,” observed Dr. Chandrika Kambam, vice president- clinical services, Columbia Asia hospitals. Dr. Debanjan Banerjee, a psychiatrist at NIMHANS (National Institute of Mental Health and Neurosciences) also cautioned people against depending on Dr Google. The panellists felt that the doctor-patient relationship had definitely been damaged.

So, did the participants find the session useful? “I have watched YouTube videos and panicked unnecessarily, at times. Now I realise that I should not simply google my symptoms, but rather, go to a doctor with an open mind,” said Nisha, a student who attended the event.

Another panel discussion involving media professionals and technology professionals centred around the topic ‘Can technology be our superweapon against medical misinformation?’. Bharat Nayak, the Editorial Director of the website, The Logical Indian, pointed out that very few news organisations now employ healthcare correspondents. The panel stressed that companies such as Facebook and Google need to develop better algorithms to stop pushing fake medical articles on their platforms.

Did you know that cow urine (gau mutra) can cure cancer? This was the theme of a video that went viral and received over a million views. “It is still being viewed,” the event organisers told the audience after showing them a clip of the video. The video has not been taken down from YouTube and people are still commenting on it. Worse, many want to know who to contact or how to go about using cow urine in cancer treatment. Such videos tend to mislead large numbers of people by giving them false hopes and further, by delaying cancer patients from getting the right treatment. Hence, the doctors and specialists at the workshop urged the audience to flag such videos or content. “Such unverified misleading advice can turn out to be very harmful,” they stressed.