Be it social base or electoral presence, everything has been shrinking for the Dalit leader, once projected as a prospective PM in political commentaries. 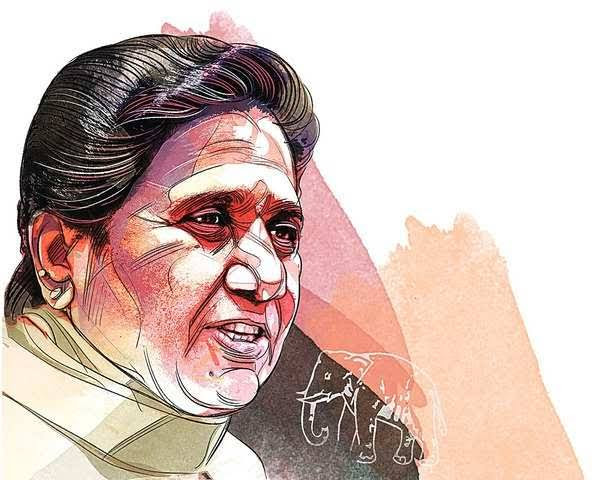 In a matter of a few months from now, India’s biggest and politically most sought after state will witness elections to its 403-member-strong assembly.

This is justifiably being touted as the semi-final before the biggest catch of 2024 - the ultimate battle.

However, for BSP chief Mayawati, the most commanding Dalit politician of the country, this is a do or die bout. Another absolute debacle could push her to the margins. Consecutive assembly losses and perpetual underperformance in parliamentary polls have begun to take a toll on the party and its prospects. Be it social base or electoral presence, everything has been shrinking for the Dalit leader, once projected as a prospective PM in political commentaries.

As the elections approach, with preparations abound, 'early bird' Mayawati has tightened her seat belts and appears to be all set for the challenge. Notwithstanding the charges of being hand-in-glove with the BJP, or as their 'B-team', Behenji and the BSP have sounded the poll bugle upfront.

Following the script of 2007 elections, when the BSP single-handedly formed the government, the party has announced candidates months ahead of even a formal notification by the Election Commission (EC). The second significant element of the successful script was the Brahmin community, the socially, economically and politically dominant constituency in the state. With the slogan of 'Sarvajan hitay, Sarvajan sukhaye' (Betterment of all, Happiness for all), BSP is hopeful of a repeat of 2007 when the support of the community emerged instrumental in BSP's victory.

The 'Sarvajan' agenda
Among the first of its multiple attempts to woo the Brahmin community these days, the BSP chief kicked off 'Brahmin Sammelan' from Ayodhya - the Ram Janmabhoomi - another obvious political symbolism.

The outreach programme which commenced as early as July 23 was led by Satish Chandra Mishra, a prominent Brahmin face in the state and second only to Mayawati herself in the BSP ranks.

In 2007, the party had won 206 out of 403 assembly pockets. By a notable slogan like 'Brahman Shankh bajayega, Haathi chalta jayega' (Brahman to blow conch, as elephant walks), Bahujan Samaj Party had summed up its several years of outreach exercises to the caste group. The party also groomed a handful of recognisable community leaders in the state.

Similarly, this time around, Mayawati has taken steps to appease the community. Last year, she removed Danish Ali from the post of leader of the BSP's parliamentary party and replaced him with Ritesh Pandey, a Brahmin. After this, the BSP has since then been led by a Brahmin in both the houses, as Satish Mishra was already at the helm in the Upper House.

One of the likely reasons for this is the perceived anger of Brahmins with the Chief Minister Yogi Adityanath presiding over a Thakur dominated administration. Adityanath too is a Thakur.

With a grand Ram Temple coming up, the Mayawati led party has been vocal to claim allegiance to the same. In fact, at times it has taken upon itself to criticize the BJP and the government for the 'slow progress' of the temple construction. Piggybacking on the juggernaut of Hindutva, the party is keen to make its case genuine and serious to the Brahmins.

Brahman Shankh bajayega?
The entire campaign of BSP rallied around the theme of 'Bahujan-Brahmin brotherhood'. This was a result of pragmatic political considerations by Mayawati since the Dalit vote bank alone couldn't get her the chair. Unmissable is it that during BSP's early days, with Kanshiram calling the shots, 'tilak, taraju aur talwar, inko maaro jute chaar' (Brahmins, Baniyas, Rajputs must be booted) slogan reverberated in its politics. A clear upper vs lower caste politics.

Pairing the two drastically different communities was not that difficult for Mayawati, instead of a combination featuring any OBC caste along with Dalits. The slow but gradual changes in the land relations in rural areas and the rise of some aspirational and competitive chunks among the OBCs sharpened the differences between the Dalits and neo-rich or neo-dominant groups. Mayawati, a seasoned politician, tactfully played her cards and eventually ended up on the winning side.

However, the politics of the country and state have gone through changes.

The Brahmin community strongly stands behind the BJP’s hardline Hindutva based politics. The caste group, which has great influence in the Awadh and Purvanchal region, consists 10% of the state's population; third in the list after Yadavs and Jatavs.

The two regions constitute almost half of the overall assembly seats.

According to the election think tank, Lokniti-CSDS, an overwhelming number, more than half, of the Brahmins always voted for the saffron party till 2004.

Though the support for the BJP declined to 40% in the 2007 assembly elections, Mayawati's Bahujan Samaj Party got only 17% of their vote. To put it in the right perspective, it was the (+)11% swing of Brahmins in the favour of BSP compared to the votes in the previous election that fuelled this exaggerated perception.

And as noted above, BJP is the sole darling of the Upper caste community now. The Brahmin Community does not appear to be doing an outlier as of now. The disenchantment with the Adityanath regime is more of a hyperbolic media creation.

In addition, BSP's own core social base has shrunk significantly. And it's none other than the hegemonic BJP that has been making a damning dent.

A Jatav party?
With Brahmins getting back to the BJP fold after the 2007 outlier, Mayawati and her party appeared investing to form an electoral umbrella comprising of Muslims and non-Yadav OBCs (the biggest voting block in UP) alongside her Dalit base. However, these didn't fetch impressive returns.

Dalits constitute a heavy 21.5% of the state's population. Of the 403 seats, 85 are reserved for Dalit candidates.

However, as trends showcase, the BSP has been losing their grip over Bahujan votes. In 2012, the BSP won only a meagre 15% of the reserved seats. While in 2017, it could claim just 2 seats out of the total 85 reserved seats.

The rise of BJP and its several welfare policies directly benefiting the poor in the SC communities has resulted in slack in the string that Mayawati commanded over the entire Dalit electorate in her heyday. The party only has a dedicated vote bank of Jatavs, the Dalit sub-caste that Mayawati herself belongs to. Jatavs are the most powerful Dalit Population in the state (12% of SC population) in terms of numbers.

So, also, the challenge for Mayawati this time around is to arrest the phenomenon of wading off Dalit support base and avoiding the tag of 'a Jatav party'.

The rise of young activist-politician Chandrasekhar Azad Ravan, another Jatav, brings an additional headache for Behenji. It is believed that the Dalit youth are attracted to the radical politics of Ravan.

To her credit, the party has been getting a minor chunk of Muslim votes, especially post the beginning of Congress' downfall, but the support isn't guaranteed, it is rather conditional (i.e, the party looking strongest to beat BJP on the hustings).

With odds mightily stacked against Maya, the first and foremost target for her should be to project herself as a challenger, who is in the race, to the current regime. Her gigantic rally on the death anniversary of 'manyavar' Kanshi Ram, on October 9th, is a good start as it must have charged up her cadre. She must build upon this momentum, much needed for the party being deserted by leaders every now and then.