An iconic bakery that owes its fame to a popular television show, has finally made its way to India. 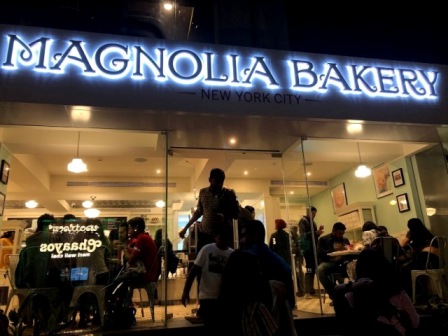 Magnolia is a favourite haunt of dessert lovers

Bangalore: Famous for its delectable desserts such as cupcakes, cheesecakes, cookies and banana pudding, the highly acclaimed Bleeker Street bakery from New York City has made its way to the streets of Namma Bengaluru. Magnolia Bakery was started in 1996, and rose to fame after its one-minute cameo on the popular television show “Sex and the City”, as the lead actress is shown sharing a cupcake with her friends.

The bakery is well known for its fresh bakes and a wide range of products. The desserts are unlike any other in the city as they are made from scratch using exceptional-quality ingredients. “There is no compromise when it comes to the quality of ingredients, most of them are imported from different parts of the world,” said store manager, Rajesh. The Franchise was launched by Zonu Reddy and Nischay Jayeshankar, owners of Spago Foods. The Bangalore-based duo decided to bring the store to India after falling in love with the cupcakes in New York.

Located on 12th Main street, Indiranagar, the small European-themed bakery tries to replicate the original outlet. While the store is always bustling with customers, weekends have more demand as people queue outside waiting to get their sweet serving. Inside the bakery, everything on display looks delicious, and it is hard for many people to make up their minds. There is a cupcake station, an open kitchen and a few tables for small crowds to sit back and enjoy a cup of coffee. Jyothsna Mani, a first- time visitor to the store said, “The buttercream cupcakes are the best here, and the desserts are also equally good. Though the items are a bit overpriced, the place is definitely worth all the hype.”

Magnolia Bakery has a vintage atmosphere, outstanding customer service, and is a hit among cupcake- lovers. “The menu is designed to appease the Indian palate and we will have seasonal desserts, like mango-based desserts during summer. We also have a special Christmas menu cooking up, but it will not be announced until the day of Christmas,” said Rajesh.