A traditional twist to a well-known tragedy brought much joy to viewers. 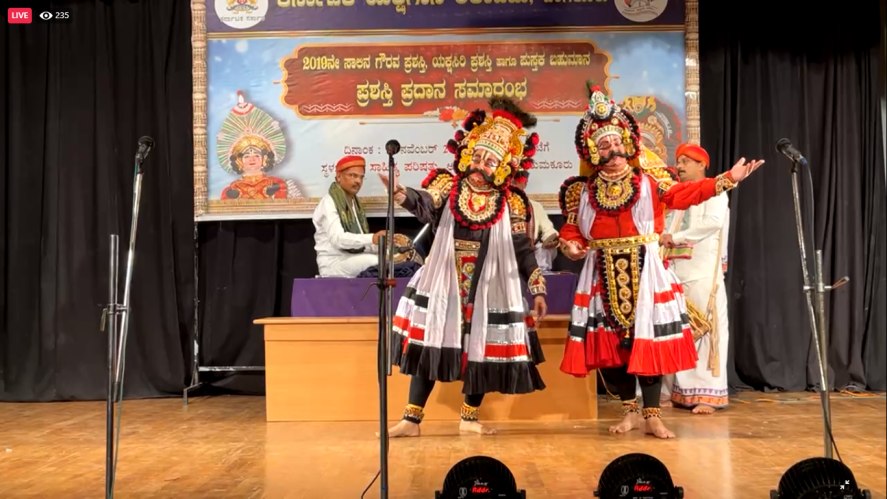 Mangaluru: On Wednesday, the four-century-old Shakespearean tragedy Macbeth was brought to life in a unique blend of Western and Indian cultures through Yakshagana. Owing to the marvels of technology, enthusiasts of the traditional theatrical dance-drama witnessed the regional adaptation of the tragedy from the comfort of their homes, while the performance was streamed live from Kannada Bhavana, in front of lake Amanikere in Tumakaru.

Commencing at half-past 7, the performance followed the tragic story of Macbeth which was first translated into Kannada by D.V Gundappa, and was in turn, used by senior Yakshagana artiste Soorikumeru Govinda Bhat to recreate the script of the dance drama. The scene opened with Macbeth and Banquo celebrating their victory, and the witches were later introduced as a pair instead of the original trio. There were minor tweaks to the story, either in the dialogues or the order of appearance of characters, however, the performance largely stuck to the original plot without any core components, like places or names, being modified.

Light and sound were cleverly used: clear white lights were used throughout the performance during dialogue and dance but a sudden shift, bathing the characters in red light, indicated a change in emotion when the scene was that of murder, vengeance, or fear, accompanied by the loud, rapid beating of the chande and maddale (traditional percussion instruments), creating a sense of urgency and fervour, wherever the plot demanded it. Using simple and understandable language, and emphasizing expression and background elements, the performers managed to both awe the viewers and get the plot across within two hours.

Putturu Ramesh Bhat, a well-known figure from the popular troupe Kateel Mela, was the Bhagavata (main storyteller) and his team was behind the instruments for the evening. As an art form that allows flexibility of characters and in who-plays-who, the cast had a good mix of male and female performers. The Macbeth-Banquo duo was played by Aarti Patrame and Shashank Arnadi, respectively. Lady Macbeth was performed by Manoj Bhat, and a fairly young cast played the rest of the characters.

Derived from yaksha, meaning spirit, and gana, meaning song, the theatrical folk art form Yakshagana amalgamates music, dance, descriptive songs, and dialogue to tell a story. The art form has gained worldwide recognition for the use of intricate headgear, colourful pieces of clothing, traditional instruments, and unique stage techniques. Although it is usually performed from dusk to dawn, daytime and early evening performances have also become increasingly common these days. Simply referred to as Aata by many, it is popular along the coastal regions of Karnataka, in Chikmagalur, Shimoga, and the Kasargod district in Kerala, as well as in different parts of the country and the world.

Typically portraying episodes (known as prasanga ) from Hindu epics and mythology, this fresh approach and the efforts of the Academy and the performers to blend elements of two distinct cultures was lauded by many.

The recording of the performance can be found on Prajavani’s Facebook page.