Two months after its originally proposed date, the Kempegowda International Airport has started operations on its second runway. 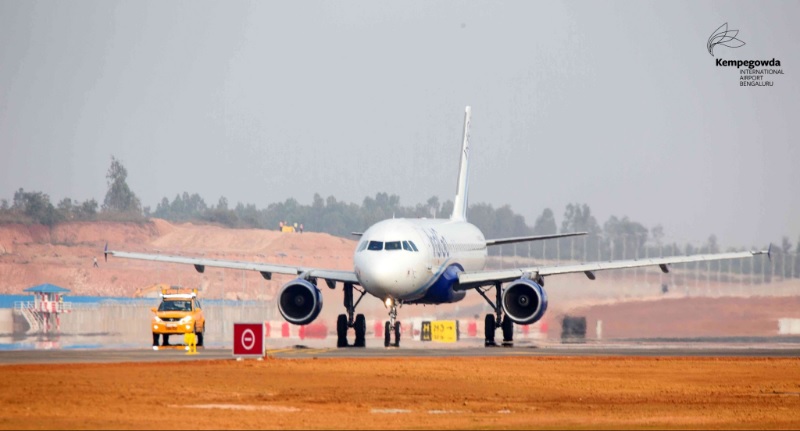 Bangalore: Catering to the rapid rise in passengers and air traffic, the Kempegowda International Airport (KIA), Bangalore, India’s third busiest airport, has opened its second runway on the south-end of its premises. The second runway, which has been functioning since December 6, is set to handle more flights daily than the Chhatrapati Shivaji Maharaj International Airport, Mumbai, and move the latter to third place.

The airport is said to handle more than 700 flights everyday and as the season advances, the number of flights plying to and from the airport will rise to 727, and by December 2020 it is estimated to handle over 970 flights.

KIA is spread across 4,000 acres of land and is located 40 km from the heart of the city. Earlier, the HAL airport, located within the city limits, had to be shifted to Devanahalli as it could not cope with the continuously growing number of air travellers.

Bangalore airport is well-known to have flight delays or cancellations owing to fog and poor visibility during winter. The south runway, which is 4,000 metres long and 45 metres wide is equipped with “CAT III B” lighting which helps flights to land safely during zero visibility. “The new runway is equipped with facilities such as centre-line lights which are state-of-the-art features that best airports in the world have. With these facilities, during winters when visibility is zero, landing will be easier and safer. This, in turn, will also help manage air traffic better as flight delays will reduce,” said Chandraditya P, a pilot working with Indigo Airlines.

The new runway, unlike the old one, is Code F compliant, which means that bigger carriers can now land at the airport. However, it will operate on CAT I standard initially to ensure stability and safety before progressing to CAT III B standard. According to CAT I standard, flights cannot land at a height lower than 100 ft.

The New South Parallel Runway (NSPR) will operate partially in the first month for two reasons: Firstly, there is only one existing crossfield taxi lane when two are required. A crossfield taxi lane is used by flights to reach the runway for takeoff and to reach the terminal after landing. “Though there are two taxiways at the airport, only one of these parallel runways is available for use,” said a Bangalore-based aviation blogger on condition of anonymity. Secondly, the unsuitable direction of the wind in December. “Considering it is winter in Bangalore, the easterlies will play a major role in flight movements, and the new runway will only see take-offs until the wind direction changes,” said the blogger.

As the new runway starts its operations, the old one will be closed for eight months for maintenance and upgradation. The renovations are currently scheduled to start in March 2020, and are likely to go on until October 2020. According to an article published on the Bangalore Aviation website, the renovations include resurfacing and strengthening of the runway, upgradation of the shoulders to meet Code F aircraft requirements, new taxiways, and lighting systems for CAT III B operations. “With the north runway closed, passengers can expect longer ‘taxi-ing’ to and from the existing terminal,” the website added.

According to reports, nine million passengers made their way through the Bangalore airport in 2008, during its first year of operations. In 2018, the numbers crossed 33 million and are expected to treble in the next decade. To keep up with the demands of the silicon valley, the airport has embarked on an expansion project estimated at Rs.13,000 crore.

The project also includes a new terminal, expansion of access roads, an underground tunnel connecting the eastern boundary of the airport to the centre, and a transport hub which will connect metro lines from the city seamlessly. The new terminal will be designed in a horse-shoe shape and constructed in two phases. While phase 1 will be completed by 2021, phase 2 is expected to be ready by 2026, according to an article published on the Bangalore Aviation website.

In an official statement, Hari Kumar, Managing Director of Bangalore International Airport Limited, says that the new terminal will be iconic and designed as a reflection of Bangalore city. “It will be founded on four pillars, technological leadership, environmental and ecological stewardship, and a celebration of Karnataka’s rich culture and heritage.”